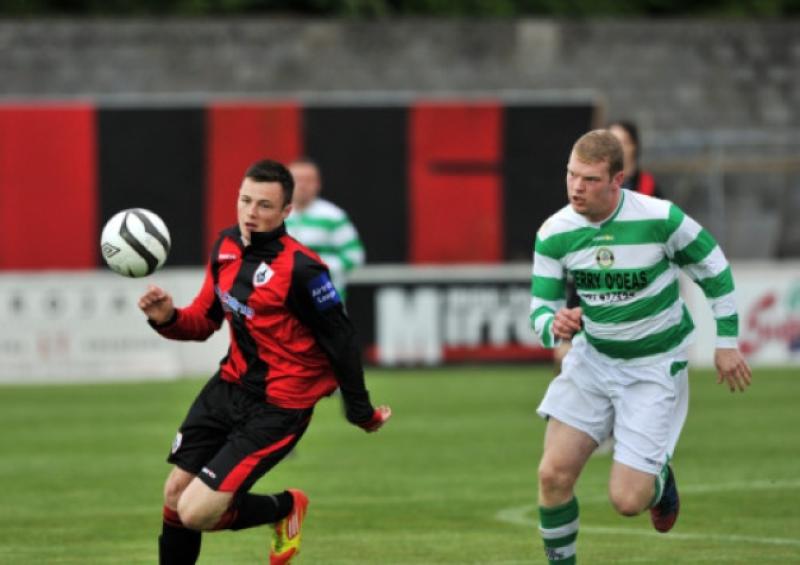 A hat-trick from ace marksman David O’Sullivan and a Mark Salmon penalty in additional time saw Longford Town book their place in the next round of the FAI Cup at the expense of Limerick junior side Pike Rovers at City Calling Stadium on Saturday evening last.

Former Wayside Celtic player O’Sullivan has been in exceptional form for Longford and this hat-trick brings his tally to 15 goals for the season. Watching this exceptional striker in action is worth the admission money alone and he is a lethal finisher, to say the least.

Saturday’s second round Cup tie was an important milestone for the Wicklow native, not just because he grabbed his second hat-trick of the season but the fact it was his first ever FAI Cup game and his debut in the famous competition was certainly a memorable one.

With winger Daniel Purdy also in outstanding form, Longford dominated the game from start to finish and they could have won by an even wider margin such was their total superiority. The Longford back four were never under any real pressure and keeper Chris Bennion wasn’t forced into making a single save throughout this one-sided contest.

Longford’s first chance came in the 15th minute and it yielded the opening goal. Mark Salmon’s pinpoint cross from the right met the head of O’Sullivan at the far post and he made no mistake in finding the back of the net.

Minutes later O’Sullivan broke down the wing and played the ball across to Purdy but his header lacked any real power and Pike Rovers keeper Gary Neville made a comfortable save. In the 21st minute O’Sullivan had a great chance to score again but his strike just went inches wide.

It was all Longford at this stage and in the 23rd minute Gary Shaw was unlucky not to score when he curled his effort narrowly wide. Purdy had an opportunity shortly after but he dragged his shot wide of the far post while Keith Quinn also had a chance but he failed to find the target.

Pike Rovers were awarded a free-kick in a dangerous position two minutes into the second half after ex-Limerick player David Ryan was fouled. Eoin Hanrahan took the kick but Purdy blocked the ball and the danger was cleared.

In the 58th minute Corie Tracey was brought on for his first game back after a lengthy injury. With a number of Town defenders out injured at the moment it was great to see the ex-Limerick player back in action for Longford.

One minute later O’Sullivan got his second goal with Purdy the provider. O’Sullivan’s effort was initially saved by opposing Neville but he pounced on the breaking ball to hit the target.

Longford continued to surge forward and their third goal materialised in the 75th minute courtesy of O’Sullivan who completed his hat-trick and right at the end substitute Josh O’Hanlon was fouled in the box with Mark Salmon planting the penalty in the back of the net.