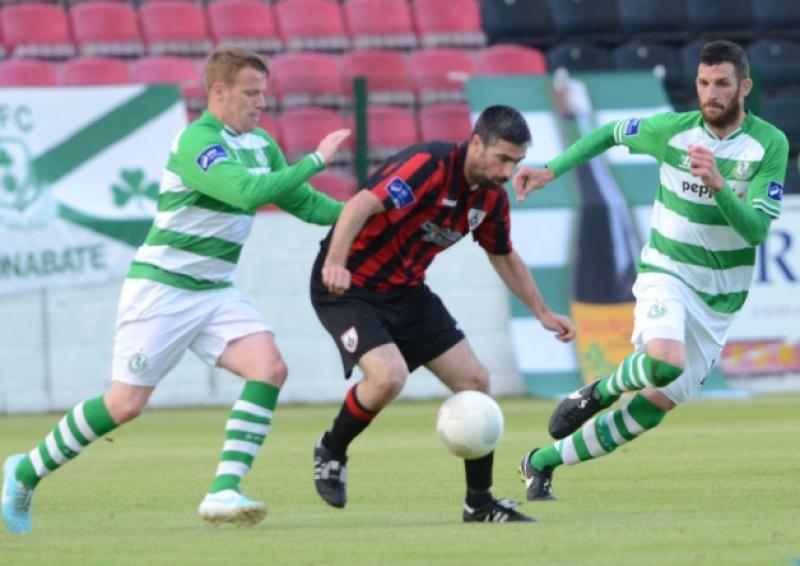 Longford Town could not follow up their terrific result against Dundalk in their previous game as they suffered a disappointing defeat against Shamrock Rovers at City Calling Stadium on Friday night last.

Longford Town could not follow up their terrific result against Dundalk in their previous game as they suffered a disappointing defeat against Shamrock Rovers at City Calling Stadium on Friday night last.

The first goal was a rebound from a penalty with no Longford player alert enough to clear the danger and the second and third goals were down to bad defending. In fact, at 2-1 behind the Town played well and could have grabbed an equaliser but they lacked urgency, especially in the second half in allowing Rovers to break and score their third goal.

Many were at City Calling Stadium to hopefully see former Republic of Ireland star Damien Duff make his debut for Rovers in the Premier Division and while on the bench he was not introduced on this occasion. Just three minutes were gone in the game when Rovers got their opening goal. Most of the home supporters among the 800 attendance were furious with the linesman for getting the attention of referee Neil Doyle, who subsequently awarded a penalty after Martin Deady fouled Gavin Brennan in the box, but the few Longford fans on that side of the ground did feel that there was contact made. Michael Drennan’s spot-kick was saved by Paul Hunt but he followed up to fire home the rebound.

Danny North forced a save out of Hunt moments later but Shamrock Rovers scored again in the 13th minute when North shot to the back of the net following a mix-up in the centre of the Town defence.

But Longford got right back into the game in the 26th minute when Lorcan Shannon scrambled the ball over the line after the Rovers defence failed to clear a shot from Kevin O’Connor.

That was a big boost for the home side and Stephen Rice had a great chance for the equaliser in the 31st minute when in the clear following a flick on from Gary Shaw but the rushed strike from the former Rovers player was saved by the opposing keeper Barry Murphy.

In the 37th minute the visitors had a chance to restore their two goal advantage; North played the ball into Gary McCabe but his thunderous strike from 30 yards out just went wide.

Before the break, the Town piled on the pressure in the search for that second goal and while they created a couple of decent opportunities Rovers keeper Murphy made comfortable saves.

Longford made a bright start to the second half but Lorcan Shannon and Gary Shaw were unable to convert the chances they created and were subsequently caught out on the counter-attack as Shamrock Rovers scored a killer third goal in the 59th minute. Drennan played the ball into the path of North and he made no mistake to leave the Town fighting a losing battle.

It was only when the home side were 3-1 down that changes were made as they switched to two up front but it was too late as the damage had already been done.