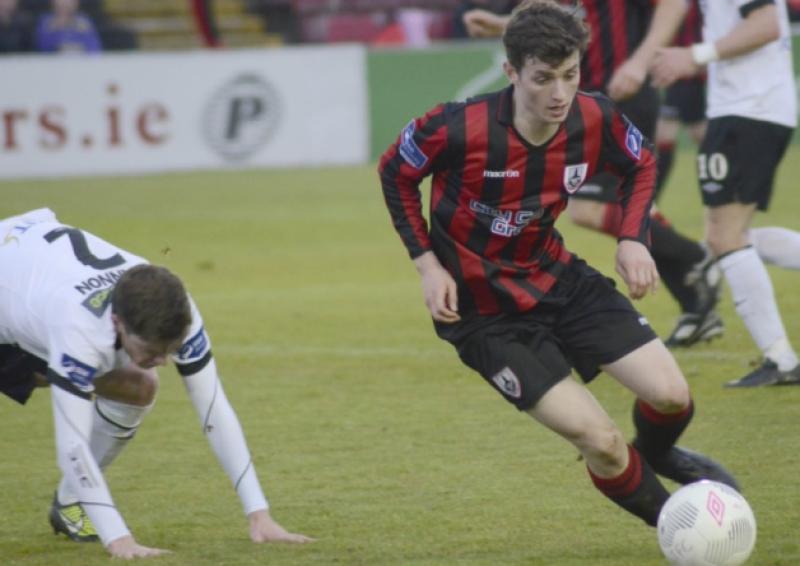 Ayman Ben Mohamed scored his first goal of the season as Longford Town defeated 10 men Bray Wanderers for a vital away victory in the Premier Division League at the Carlisle grounds on Friday night last.

Ayman Ben Mohamed scored his first goal of the season as Longford Town defeated 10 men Bray Wanderers for a vital away victory in the Premier Division League at the Carlisle grounds on Friday night last.

The only goal of the game came in the 66th minute when Ben Mohamed took on two defenders before shooting past Bray keeper Stephen McGuinness. It was a goal that the Town deserved but tough on Bray who had Peter McGlynn sent-off in the 8th minute.

Despite playing over 120 minutes of football the previous Monday night and also having penalties to contend with, the Town didn’t show any side effects from the FAI Cup replay win over Finn Harps in Ballybofey.

In their previous league game against Bray, Longford were deserved winners over poor opposition but since Trevor Croly took over the Wanderers have been a different proposition in recent weeks and this was always going to be a tricky tie for the Town.

Bray had the ball in the net after six minutes but Alan McNally’s goal was disallowed for offside. Two minutes later and the home side were down to 10 men when McGlynn received his marching orders for a lunge on Town midfielder Stephen Rice.

Although the Town enjoyed the greater share of the possession it was Bray who had the first real chance on goal when Ryan McEvoy brought a fine save out of opposing keeper Paul Skinner in the 21st minute.

Five minutes later and the Town had a good chance when Pat Sullivan’s free-kick brought a diving save from McGuinness.

In the 36th minute Bray defender Hugh Douglas blocked David O’Sullivan’s effort at the expense of a corner. Bray very nearly opened the scoring on a counter attack in the 38th minute; David Cassidy took a quick free-kick and played the ball to Chris Lyons who got in behind the Town defence. But good tracking back by the Town defenders put the striker off and his shot was off target.

The Town started the second half brightly but only created half chances. They had calls for a penalty turned down in the 55th minute after David O’Sullivan received the ball from Mark Salmon and was taken down in the box by Bray defender Adam Mitchell. Referee Anthony Buttimer was giving the spot-kick but the linesman overruled the decision and a hop-ball was awarded instead.

Adam Mitchell saved Bray minutes later when he got a foot to Martin Deady’s cross with Kaleem Simon and Gary Shaw both lurking in dangerous positions.

But in the 66th minute the Town broke the deadlock; Ben Mohamed weaved his way past a number of Bray defenders before he unleashed a shot that went in off the butt of the post.

After finally taking the lead, the Town went in search of more goals and Bray had to defend well. Nine minutes from time the home side nearly grabbed an equaliser when Lyons was through and came one on one with Skinner but the Town netminder did well to save the shot with his feet to keep his goal intact.

Near the end Longford came close to doubling their advantage; substitute Kaleem Simon set up Ben Mohamed but his shot lacked any real power and Bray defender Gareth McDonagh put in a tackle to block the shot.