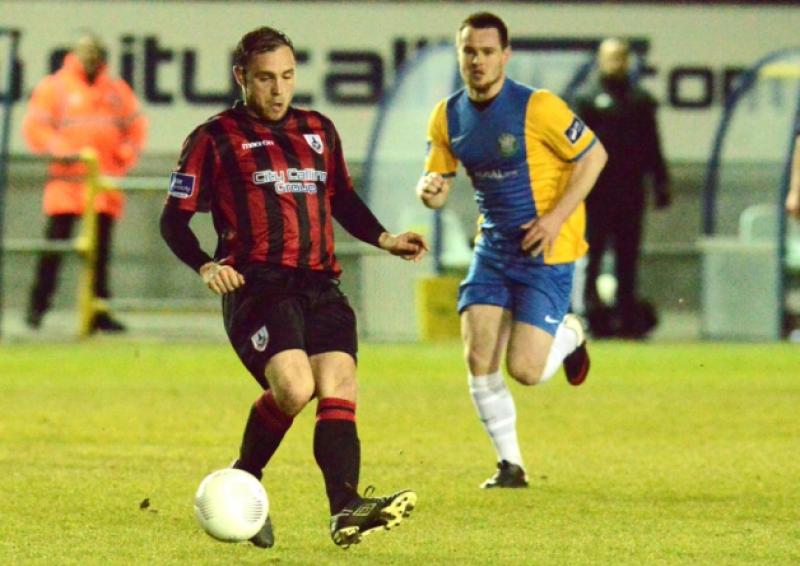 Longford Town registered their first victory of the season in the Premier Division and collected three crucial league points in the process of beating bottom of the table Bray Wanderers at City Calling Stadium on Tuesday night of last week.

Longford Town registered their first victory of the season in the Premier Division and collected three crucial league points in the process of beating bottom of the table Bray Wanderers at City Calling Stadium on Tuesday night of last week.

After picking up their first point in the draw away to Limerick in their previous game, the Town overcame the challenge of a poor Bray side who are facing a serious struggle this season in the battle to avoid relegation from the top flight.

Longford defender Pat Flynn got the opening goal as early as the 9th minute and striker Gary Shaw scored in the 51st minute to put the issue beyond all doubt, much to the delight of the home supporters among the 420 attendance.

Bray had chances in the first half but offered very little on the changeover. The Town created a number of chances in the second half and were unlucky not to score more goals.

The deadlock was broken in the early stages of the game when Pat Sullivan’s throw-in on the right wasn’t cleared by the Bray defence and Pat Flynn found the back of the net after a scramble in the box. It was his first goal for the club.

Although the Town had the majority of possession after that, they failed to create many chances of note. Kevin O’Connor - the player that scored the late winner for Bray in 2013 to keep the Town consigned to the First Division - came close to scoring for Longford in the 20th minute but his low shot went wide after a neat cross from the lively Don Cowan.

Bray gradually began to get into the game. In the 24th minute former Town player Ryan McEvoy shot straight at Paul Hunt and in the 33rd minute Graham Kelly forced a fine save out of the Town netminder after a McEvoy corner.

In the 42nd minute Pat Flynn’s shot was blocked by Daniel O’Reilly while Bray should have levelled matters right before the break when Luke Gallagher’s cross fell to Peter Durrad but his effort just went wide.

Six minutes into the second half the Town doubled their advantage; Don Cowan did all the work and his shot across the face of the goal was turned in at the back post by former Bray player Gary Shaw.

Longford were now in complete control and proceeded to creat a number of other opportunities. In the 69th minute another player who spent time with Bray, David O’Sullivan, was through on goal and he brought a fine double save out of the opposing keeper Stephen McGuinness. Stephen Rice then had a shot cleared off the line as the Town went in search of a third goal.

In the 75th minute Kevin O’Connor had another chance to score against his former side but his effort lacked any real power and keeper McGuinness was able to gather.

Longford continued to press and pile the pressure on a weak Bray defence but they couldn’t grab another goal. Bray offered very little in the second half and failed to trouble keeper Hunt or the Town back four as the midlanders kept their first clean sheet of the season.