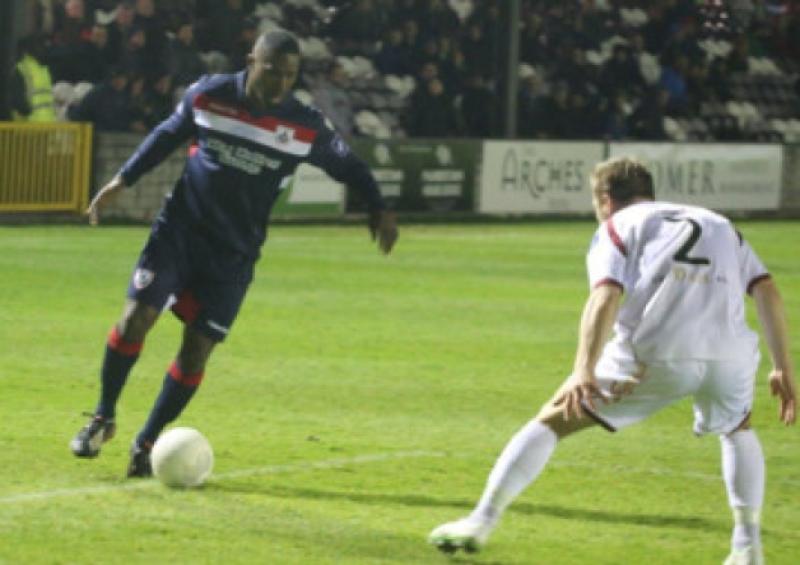 Following on from recording their first home win of the season. Longford Town got their first away win in the Premier Division on Friday night last when they claimed a dramatic win against Galway United at Eamon Deacy Park.

Following on from recording their first home win of the season. Longford Town got their first away win in the Premier Division on Friday night last when they claimed a dramatic win against Galway United at Eamon Deacy Park.

With the clock ticking down and Galway having nearly every man behind the ball it looked like both sides would have to settle for a point but in the third minute of stoppage time Don Cowan shot to the net in a crowded goalmouth.

The drama didn’t end there because referee Adriano Reale red carded Town defender Pat Flynn for his celebration of the goal and also sent-offGalway captain Sam Oji. He then proceeded to play on nearly five more minutes but the Town held firm for a fantastic win.

Galway had already lost defender Stephen Walsh in the 26th minute for a professional foul on Gary Shaw. Down to 10 men they reverted to a negative defensive game which very nearly gave them a share of the spoils.

The Town were sluggish in the opening minutes and Galway took the lead six minutes in; Paul Hunt could only parry Jason Molloy’s shot and Jake Keegan finished the ball to the net.

In the 13th minute the home side had a chance to double their advantage but Enda Curran’s effort was deflected out for a corner.

After their slow start the Town began to get into the game and Don Cowan caused problems down the right flank. In the 26th minute Walsh was sent off for taking down Shaw who was through on goal.

Longford then took a hold of proceedings but struggled to break down a resilient Galway defence. But right before half-time the Town got back on level terms when Gary Shaw headed home a cross from Conor Powell.

Buoyed up by that goal, the Town started the second half very well and in a frantic two minute spell had a couple of chances and a few calls for handball which the match official waved away.

It was all Town after that but Galway stood firm and soaked up the pressure. David O’Sullivan and Kevin O’Connor had chances while others saw their shots blocked down by Galway players.

Totally against the run of play Galway could have got a second goal; Colm Horgan passed to substitute Padraic Cunningham who brought a fine save out of Town keeper Paul Hunt. The home side were living off scraps as the Town continued to press.

When the board when up with three minutes of additional time to be played the Town bombarded the Galway goal; they hit the bar and won a number of corners and from one of those corners they got that all important second goal.

Galway couldn’t clear the ball and it broke to Don Cowan who smashed his shot past Galway keeper Conor Winn but the drama didn’t stop there with both sides losing players as the Town went on to seal a great win.

Former Town Chairman and long-time supporter, the late Noel Whelan, would have been very proud of the performance against Galway. Noel. whose sudden death occured on Wednesday last, was remembered before the game with a minute’s silence and the Town players also wore black armbands.