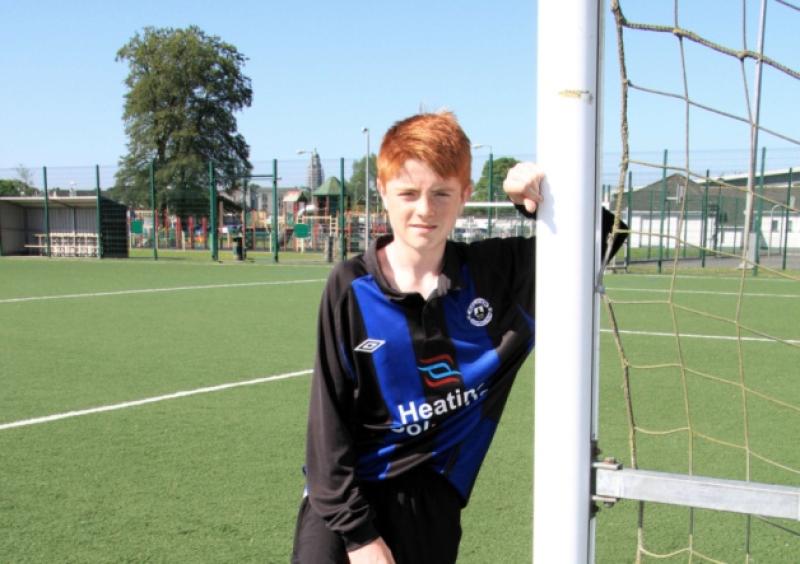 The Republic of Ireland may not be at the World Cup in Brazil, although one Longford youngster is hoping he might feature with the ‘Boys in Green’ on the beautiful game’s greatest stage in the future.

The Republic of Ireland may not be at the World Cup in Brazil, although one Longford youngster is hoping he might feature with the ‘Boys in Green’ on the beautiful game’s greatest stage in the future.

Fifteen-year-old Aodh Dervin, a member of Melview FC, has been called up to the Republic of Ireland U-15 squad and he is the first Longfordian to achieve the distinction at this particular age group.

Delighted Melview FC Chairperson Mark King told the Leader, “This is a huge achievement for Aodh and the club are over the moon for him and his family. As a club, Melview FC have been trying to make a significant breakthrough and to have someone, who started his career with Melview from the age of five receive an international call up, it is most satisfying.”

Mr King added, “We also hope Aodh won’t be the last Melview player to go on and progress to this level but all our players know that they’ll have to work very hard if they are to follow in Aodh’s footsteps.”

Aodh, son of Damian and Jacinta, resides at St Alban’s on the Battery Road in Longford town and he has one brother, Oisín, and two sisters, Saoirse and Darerca.

Aodh is a popular student at St Mel’s College and his family are delighted that his exceptional soccer skills have been recognised.

At the recent Melview FC awards night, Aodh was voted the U-15 Players Player of the Season. His favourite position is centre midfield and his favourite player is Longford Town’s Rhys Gorman.

Talented Aodh has won many honours with his club and he has also represented the Longford & District Schoolboy League at various age groups.

Indeed, he was Player of the Tournament at U-13 level in Tipperary, while the following year at the Kennedy Cup in Limerick he picked up a similar accolade.

Republic of Ireland U-15 manager Niall Harrison quickly recognised Aodh’s ability on the ball and strength in the tackle and he duly called him up to his squad. Under Harrison’s expert guidance, the squad train in Dublin at the AUL Complex in Clonshaugh, Dublin.

Thrilled to be selected for the U-15s, Aodh is keen to learn and his ambition is to feature with the senior international squad, similar to former accomplished midfield generals like Roy Keane and Ronnie Whelan. Level-headed Aodh remarked, “Yes of course, I’d love to play for Ireland at the highest level but I have to take things one step at a time.”

Melview FC have 11 teams from U-8 up to U-17 and Aodh’s selection for the Republic of Ireland reflects the quality of the coaching structure at the club.

Mr King pointed out, “This is a big deal for the club. It also shows that you can still do well by playing soccer locally in Longford and that you do not have to go to Dublin to get noticed. It is all about hard work, having the right attitude and work ethic and having good people around you. Aodh has these attributes in abundance and well done to him.”

Melview FC’s Ryan McGoey lined out with the Longford & District League in the U-14 Kennedy Cup last week in Limerick so the conveyor belt of talent goes on gathering momentum.

Mr King concluded, “Aodh’s achievement is massive for the club, and also for Longford, and we wish him and his family the very best in the future.”