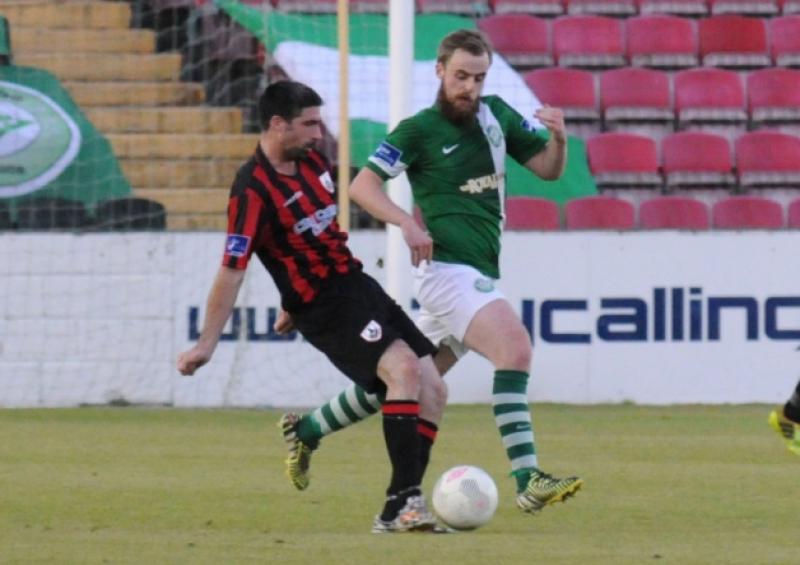 A terrific second half strike from David O’Sullivan gave Longford Town their first league win in eight games and moved them back into seventh place in the Premier Division table, just one point behind Bray.

A terrific second half strike from David O’Sullivan gave Longford Town their first league win in eight games and moved them back into seventh place in the Premier Division table, just one point behind Bray.

O’Sullivan had missed an earlier chance in this crucial game at City Calling Stadium on Saturday night last to give the Town the lead but when he received the ball from Mark Salmon in the 57th minute he only had one thing on his mind as he struck an unstoppable shot past Bray keeper Peter Cherrie.

With very little separating the sides in the bottom half of the table this was a vital victory for the Town. They are nine points ahead of bottom side Limerick who are rejuvenated at the moment, and five ahead of the relegation play-off spot. Every point from now on will be so important.

In an uneventful first half chances were at a premium. The first chance on goal came in the 14th minute when Mark Salmon floated in a free-kick, Mark Rossiter’s header across the goalmouth fell to David O’Sullivan but he blasted his effort over the bar.

Rossiter should have done better with his header minutes later from another Salmon free-kick that Cherrie easily gathered. The Town enjoyed the majority of possession but couldn’t create anything to trouble the Bray netminder.

The visitors only real chance of the first half fell to Chris Lyons in the 39th minute. Ryan McEvoy and Dave Scully combined to release Lyons and he raced through on goal but Town keeper Paul Hunt came off his line and spread himself well to make a good save.

The opening minutes of the second half were lacklustre. The game needed a piece of magic to liven it up and that’s what happened in the 57th minute when O’Sullivan broke the deadlock with a stunning strike; his fifth goal of the season.

Bray responded quickly and one minute later they had a chance to level matters but Hunt pulled off a fine save to deny David Cassidy.

In the 68th minute a deflected shot from John Sullivan just went wide as Bray tried to get back into the game.

The Town were reduced to 10 men in the 73rd minute when Stephen Rice was sent-off for a second bookable offence. It thus was a defensive job for the Town for the remainder of the game to consolidate their lead.

Bray did pile on the pressure as they went in search of an equaliser but the Town defence held firm with Hunt doing very well to keep his net intact.

Try as they might Bray just couldn’t find a way of getting the equaliser and as the clock ticked down they didn’t really look like scoring as the Town held out for a valuable three points.

It’s another massive match for the Town on Saturday night next away to Galway United.