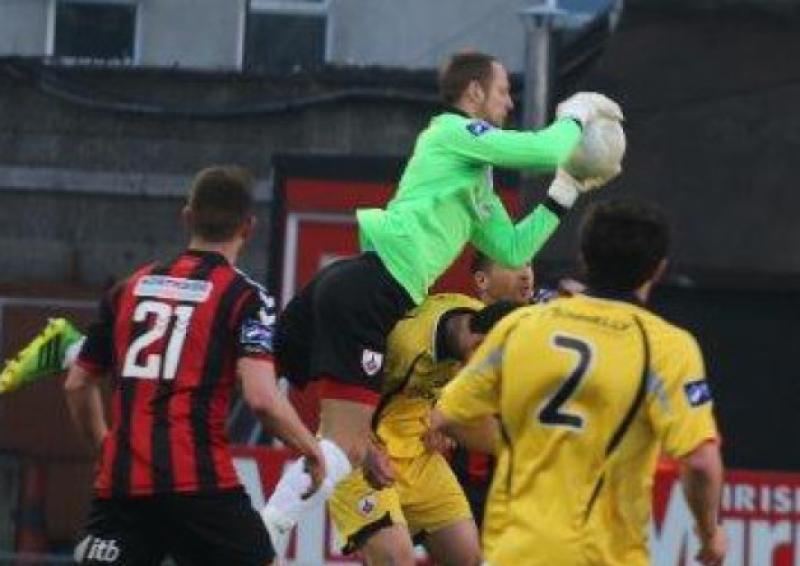 Longford Town suffered their first defeat in five league games when they went down to Bohemians at Dalymount Park on Friday night last.

Longford Town suffered their first defeat in five league games when they went down to Bohemians at Dalymount Park on Friday night last.

It was a second win for Bohs over the Town in a matter of days after their EA Sports Cup victory a few days earlier.

Town manager Tony Cousins bemoaned the loss of key players for this fixture and they also lost Stephen Rice and Kevin O’Connor during the game but no excuse can be made for this defeat; too many players put in below par performances.

In a scrappy first half the Town enjoyed some of the possession but didn’t really stretch the Bohs defence. Despite the decent start the visitors went behind in the 23rd minute when an unmarked Dean Kelly headed home Lorcan Fitzgerald’s corner.

Longford were then dealt another blow in the 37th minute when Stephen Rice was taken off after the effects of an earlier collision and had to be stretchered to an ambulance and brought to hospital.

In the early exchanges of the second half Bohs pressed for another goal while Longford’s best chance fell to David O’Sullivan in the 69th minute. The striker was played in by substitute Kalem Simon but his deft shot was excellently saved by Bohs keeper Dean Delany.

Three minutes later Bohs got their second goal when substitute Adam Evans scored with his first touch after he was set up by Dean Kelly. In the 77th minute it could have been 3-0 to Bohs when Kelly blocked down Paul Hunt’s attempted pass and the ball rolled across the front of the goal and out for a goal kick.

The Town struggled to string decent passes together as they tried to create chances and break down a resilient opposing defence.

Bohs continue to pile on the pressure but they were guilty of some poor finishing. It didn’t matter because they had already made the victory secure in what was a disappointing defeat for the Town and a much improved performance will needed against Sligo Rovers at City Calling Stadium on Friday.