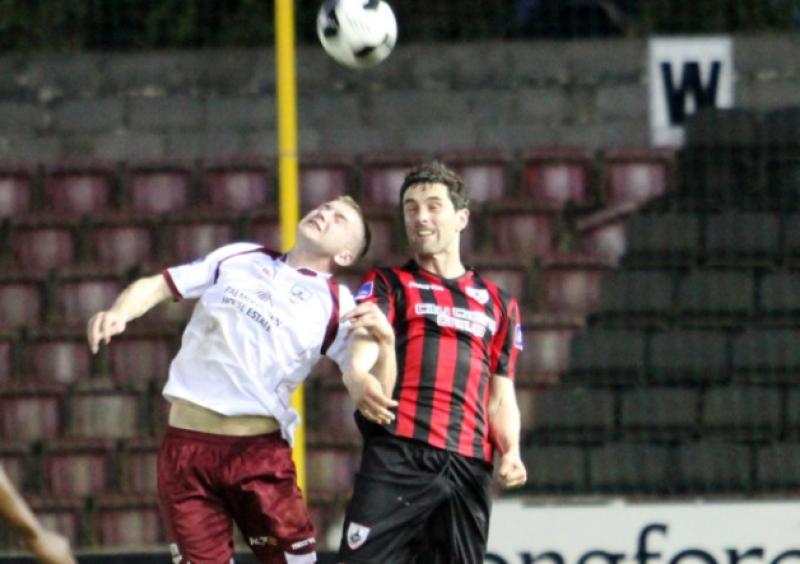 A goal in stoppage time from Stephen Rice salvaged a point for lucky Longford Town as they snatched a last gasp draw against Galway FC in the Airtricity League First Division clash at City Calling Stadium on Saturday night last.

A goal in stoppage time from Stephen Rice salvaged a point for lucky Longford Town as they snatched a last gasp draw against Galway FC in the Airtricity League First Division clash at City Calling Stadium on Saturday night last.

With time running out Longford bombarded the Galway box. Noel Haverty’s attempt in the 92nd minute was blocked down and in the scramble Rice got the vital touch to score a very important goal.

Manager Tony Cousins was delighted with his side’s attitude. “The lads showed that if you want to achieve anything a game is never over. That shows the spirit and the heart that is in this team. The boys know everyone is trying to put pressure on. Managers are trying to pile pressure on and other people too early on in the season.”

But it was another poor performance from the Town who never really tested Galway keeper Conor Gleeson throughout the game. The visitors had a lot of the ball but found it hard to carve out real scoring opportunities. They will feel aggrieved that after taking the lead in the 81st minute they couldn’t hold out for the win.

Cousins believes that Galway will be pushing for promotion come the business end of the season and felt it was a good result: “People get upset, uptight, start panicking and shouting. I just go along the way I do. I told the lads before the game that Galway will be one of the main challengers and we played one of the top sides. This was never going to win or lose the title but fortunately we managed to avoid defeat.”

Galway started the game brightly but failed to test Town keeper Chris Bennion. Longford’s first attack yielded the opening goal in the 13th minute. Kevin O’Connor and Peter Hynes exchanged a couple of passes before the latter played the ball into David O’Sullivan, who turned and found the net from close range.

But the lead only lasted four minutes as Stephen Walsh pulled the ball back for Jason Molloy to sidefoot home the Galway equaliser.

In the 21st minute the Town had a chance to regain the lead when a free-kick from O’Connor found Hynes and he directed the ball into the path of Rhys Gorman but his low drive just went inches wide.

After that it was Galway who applied the pressure and created a few chances. Molloy hit his shot over the bar in the 36th minute and four minutes before the break a dangerous cross from Marc Ludden was cleared away by Town defender Willie Tyrrell.

In the second half there was more urgency shown by the visitors but for all their dominance they failed to create many chances of note. Town defender Pat Sullivan was caught out badly in the 51st minute but lucky for him Molloy’s shot was off target.

Longford had a couple of chances; Lorcan Shannon squandered a great opportunity before Noel Haverty’s header from substitute Etanda Nkololo’s corner in the 62nd minute just went over the bar.

With Galway in control and the Town struggling up front, Tony Cousins decided to make another change with Gary Shaw replacing Hynes in the 70th minute. Just like in previous games Shaw made an impact from the moment he was introduced.

In the 74th minute Shaw set up O’Sullivan but the striker blasted his effort over the bar. Six minutes later Longford’s third substitution drew the biggest cheer of the night as midfielder Mark Salmon made a welcome return after being out of action for over 10 months with a knee injury.

Having Salmon back is a big plus for the Town, according to manager Cousins. “It was great to see Mark back as he is one of the best players in the league. We lost him last year and for him to be coming back now it’s a massive plus for us.”

The Longford supporters joy of seeing Salmon return was shortlived because one minute after his introduction Ryan Manning put Galway ahead. A throw-in from Luddden fell to Ryan Connolly and he played the ball to Manning who found the back of the net with a wonderful finish.

With time running out it looked like Galway would come away with all three points but in the second minute of stoppage time a scramble in the box saw the ball fall to Stephen Rice who made no mistake to score a very vital first goal for the club.