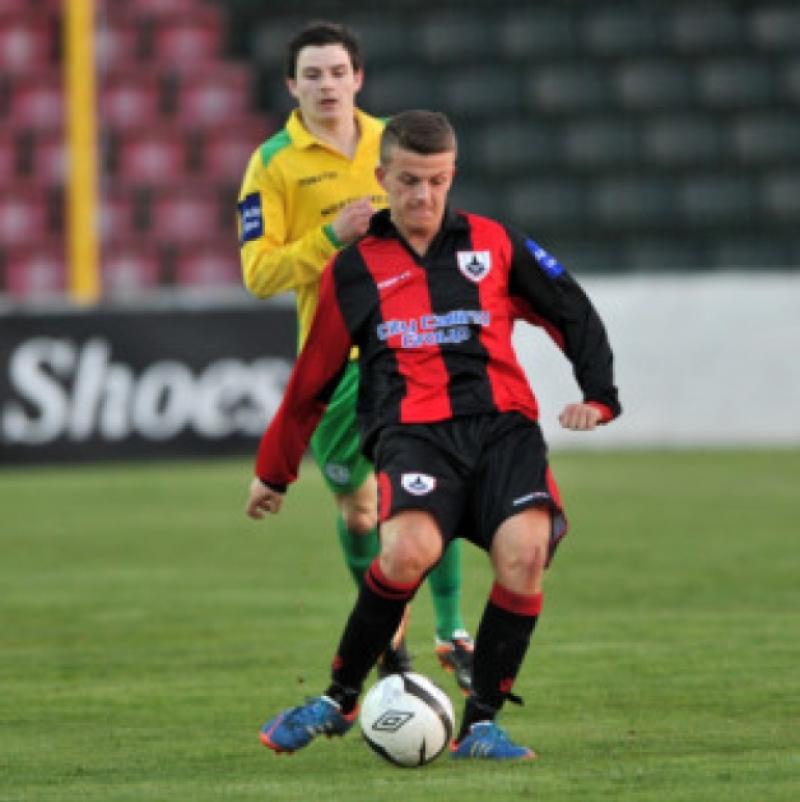 A poor Longford Town display coupled with an even worse performance from referee Sean Grant saw the First Division league leaders suffer their first home defeat of the season and their lead at the top of the table cut to just three points after losing out to bogey side Finn Harps at City Calling Stadium on Saturday evening last.

Harps are the only team to have beaten the Town this season after recording a 1-0 victory in Ballybofey back in March. The midlands venue is also becoming a happy hunting ground for them too; they won both their meetings there last season and now have recorded another win.

It was a lacklustre performance from the Town who will be disappointed with the manner in which they conceded the goals. That has been a problem for them this season and they have only kept clean sheets in two of their games. Things need to tighten up at the back and they need to not give away sloppy goals.

The main talking points of the game were the two penalty claims that the Town had turned down in the first half and the terrible tackle on Willie Tyrell in the second half that went unpunished; the defender had to go off injured with 10 minutes of the game remaining.

Wexford referee Sean Grant has never endeared himself to the Town faithful with strange decisions going against them in a lot of games he has refereed. The standard of officiating in the First Division has been questioned week after week. It’s the one thing supporters of the eight clubs agree on and with so much at stake in the league something needs to be done. Managers and players are held accountable for their actions but not referees; assessors seem to be turning a blind eye to poor performances.

It was Town who started well and in the 10th minute Keith Quinn’s corner from the right found Brian McCarthy but the defender blasted his effort over the bar. Minutes later Gary Shaw forced Harps keeper Ciaran Gallagher into making a save.

In the 16th minute David O’Sullivan was unlucky to see his low drive go wide of the far post. But two minutes later and out of nothing Finn Harps broke the deadlock. The Town defence stood off Sean McCarron and he was given enough space and time to pick a spot and shoot past Chris Bennion.

Longford tried to get back on level terms and in the 21st minute Noel Haverty played a neat ball into O’Sullivan but Finn Harps netminder Gallagher did very well to come out and save at the striker’s feet. Then in the space of a minute the game turned very much in favour of Finn Harps.

Purdy was through on goal in the 33rd minute and was taken down in the box but the referee waved away the strong claim for a penalty. With the Town players still remonstrating with the referee Harps seized the initiative and played a long ball upfield. Kevin McHugh found himself one on one with Brian McCarthy and the Harps player showed just why he is still one of the best strikers in the League of Ireland with a cool finish from close range.

It was a bad blow for the home side and in the 40th minute they had another penalty call waved away when Haverty was blatantly pushed in the box by Harps opponent Damien McNulty and the decision incensed the Town bench and supporters.

Longford were unlucky not to pull a goal back in the 58th minute but Gallagher did well to save from Mark Salmon. The ball wasn’t cleared properly and it eventually fell to David O’Sullivan but his effort came crashing off the underside of the crossbar.

Despite having a lot of possession the Town failed to create chances with Harps standing firm and in the 81st minute the Donegal side extended their lead. Kevin McHugh did all the hard work to get to the endline and put in a cross with Town defender Willo McDonagh slicing a mishit clearance into his own net.

In the final 10 minutes the Town piled on the pressure and in the 88th minute Mark Salmon pulled a goal back. They went searching for a second and that came three minutes into additional time through Michael Isichei. But try as they might Longford couldn’t pull off another dramatic late, late show in the dying seconds and Harps held on for the win.

Cobh Ramblers are the visitors to City Calling Stadium on Saturday night and the Town need to get back to winning ways against the Cork side but it won’t be easy.