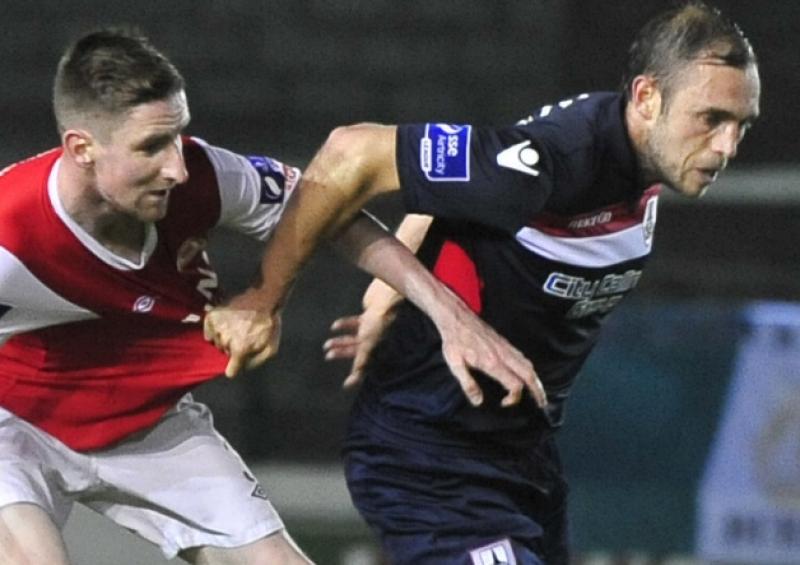 The pressure is mounting on manager Tony Cousins as Longford Town continue to be dragged down into the frantic relegation battle that has developed in the Premier Division and it was a very demoralising defeat against a superior St Patrick’s Athletic side at City Calling Stadium on Saturday night last.

The pressure is mounting on manager Tony Cousins as Longford Town continue to be dragged down into the frantic relegation battle that has developed in the Premier Division and it was a very demoralising defeat against a superior St Patrick’s Athletic side at City Calling Stadium on Saturday night last.

Now fifth from the bottom of the table with four fixtures remaining, Cousins and his players are in a very precarious position and will need to get some more points from the games against Sligo Rovers (home), Cork City (away), Drogheda United (away) and Derry City (home) to guarantee survival in the top flight.

The loyal supporters are certainly not very happy with some suggesting that Cousins should not be in charge next season, even if the club avoid the dreaded drop into the First Division, and it appears that most have lost their patience with the manager on the evidence of a poor run of results.

Having said that, it might have been a different story on Saturday had striker Gary Shaw (who is enduring a long and frustrating goal famine) managed to convert a couple of glorious clear-cut chances in the early stages of this crucial game watched by the official attendance of 457.

But St Pat’s were technically a lot better than Longford, particularly so in the first half, and were in control from the moment they broke the deadlock as early as the 4th minute when Christy Fagan was given the time and room to plant the ball in the back of the net.

Slack defending, to say the least, as the home defence failed to cut out a cross from Aaron Greene and things got even worse when James Chambers was on target from a sweetly struck free-kick in the 24th minute for the decisive second St Pat’s goal.

In between, Gary Shaw was most unfortunate not to equalise as his well struck shot was parried by the St Pat’s netminder Conor O’Malley against the top of the crossbar in the 10th minute.

But there was no excuse for Shaw when he was put clean through with just O’Malley to beat in the 16th minute, only for the opposing keeper to produce a point-blank save.

Soon after the Town were dealt a real shattering blow when the visitors were on target again to extend their advantage and three free-kicks in a row came to nothing for the home side who were then denied by another O’Malley save in the 36th minute as he blocked a close range strike from Gary Shaw.

It was becoming very frustrating for Longford, who tried hard to get back into the game in the second half and went very close to scoring when Kaleem Simon shot against the post in the 55th minute.

Substitute Mark Salmon then blasted the ball over the bar as the game developed into a scrappy affair, not helped by poor referee David McKeon whose general handling of the game left a lot to be desired and particularly the dubious decision to award St Pat’s a free-kick that led to the second goal.

Several yellow cards were issued by the whistle happy Dublin official and Longford Town’s tale of woe was complete when the always dangerous Aaron Greene fired the ball past Paul Hunt for a killer third goal in the 75th minute.

Mark Salmon and Kevin O’Connor were then narrowly off target as the Town went in search of a consolation goal but they almost fell even further behind when a shot from Greene was pushed against the post by the home keeper Hunt in the 84th minute.

St Pat’s created a few other decent chances during the course of this best forgotten game and while the Town supporters were a very angry lot on their way out of City Calling Stadium after witnessing a heavy defeat, it must be said that the injured Ayman Ben Mohamed was sorely missed.

Longford are lacking a commanding presence on the pitch in the current crisis and with no apparent confidence in the manager Tony Cousins, it has descended into a fierce struggle in the quest for Premier Division survival with the Town just three points clear of the second from bottom play-off position.