Mark Salmon points to a good start to ease
the pressure 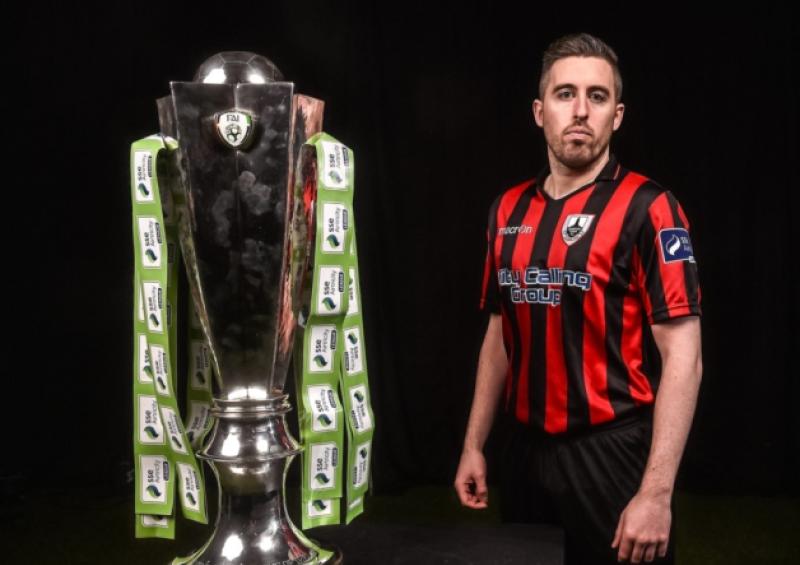 It has been a long time coming for Mark Salmon but he cannot wait to lead Longford Town out on Friday night in Oriel Park against Dundalk for the club’s first game back in the Premier Division since 2007.

It has been a long time coming for Mark Salmon but he cannot wait to lead Longford Town out on Friday night in Oriel Park against Dundalk for the club’s first game back in the Premier Division since 2007.

Speaking to the Leader, the Town captain said: “I have been with Tony (Cousins) since the start and it’s great to eventually be in the Premier Division. People have been saying you are away to Dundalk and then got Shamrock Rovers at home but at the end of the day that’s what all the hard work has gone in for; playing the likes of those big clubs. We are really looking forward to the major challenge.”

Salmon has some Premier Division experience and in the Town squad there are very experienced players and also lads who will be playing in the top flight for the first time.

“When I came back from England I was with Drogheda but I was sort of in and out of the team so this is my first real crack at the Premier Division. When you look at the lads Tony has brought in, the experience is going to be great. We have a good mix of players that have featured in the Premier league and won it while the promising young lads we have won’t be fazed by anything.”

The Dubliner is happy that the majority of last season’s squad stayed with the club but he is not surprised.

“The job Tony has done has been great; he keeps strengthening but has always kept the bulk of the squad. The way the club is run now and our training facilities, the ground and all, it is a great set up. Everything is there and players want to stay. The club is going in the right direction.”

After spending a long number of years in the First Division with Longford Town and also Athlone, Salmon is looking forward to coming up against the best players in the League of Ireland.

“When you are playing football you want to play at the highest level. We are looking forward to going to the other Premier Division grounds, playing in front of bigger crowds and pitting ourselves against the better players in the league.”

Salmon is a realist and knows that it’s going to be a big step up for the Town and every game will be tough. He’s hoping that his club will get a good start because that is vital if they are to stay in the Premier Division.

“You want to get your first win on the board as soon as possible to ease the pressure. Last year Athlone went on a bad run at the start and it developed into a fierce struggle for them which ended in relegation. You want to get that win early and get as many points on the board in the first series of fixtures; that will be the aim.”

Longford Town will set targets for the season but the captain admits they will be kept in the dressing room. Consolidation though is top of the list.

“We will have our own aims in the dressing room. Obviously to consolidate our Premier Division status is the main objective and I believe that we are capable of doing that,” said Salmon.