Vital win in the league away to Waterford 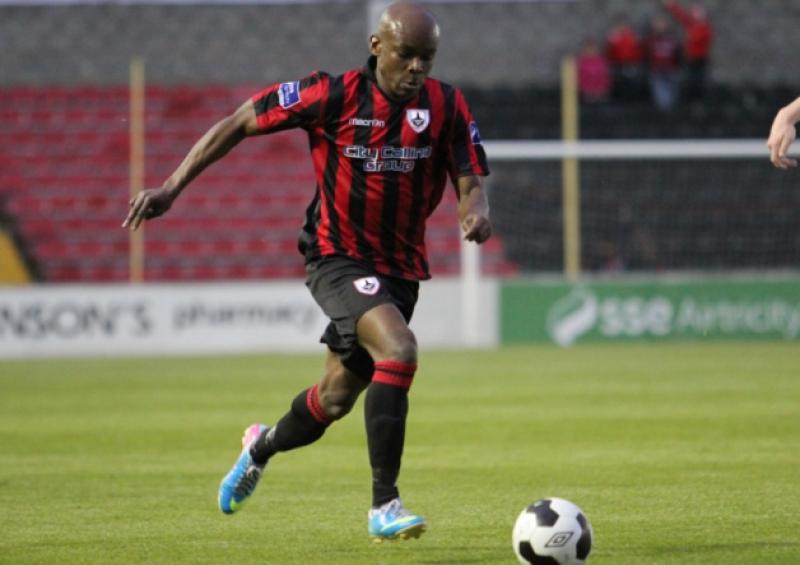 A goal from Etanda Nkololo seven minutes from time gave Longford Town a vital win away to Waterford United in the Airtricity League First Division clash at the RSC on Friday night last.

A goal from Etanda Nkololo seven minutes from time gave Longford Town a vital win away to Waterford United in the Airtricity League First Division clash at the RSC on Friday night last.

Twice Waterford came from behind to level the game and when Willie John Kiely scored late on, it looked as if the spoils would be shared only for substitute Nkololo to pop up to score a stunning winning goal.

The win saw the Town move further up the table and they are now eight points behind leaders Shelbourne but with two games in hand.

Vinny Sullivan had an early chance to put the home side in front in the 3rd minute but after Town keeper Paul Hunt parried his initial effort, the Waterford striker just failed to make it to the breaking ball. Longford broke the deadlock in the 6th minute when a kick-out from Hunt found Lorcan Shannon and he flicked a pass into the path of David O’Sullivan, who controlled the ball superbly on his chest before he beat Waterford keeper Matthew Connor.

Gary Shaw tested the home keeper minutes later before Stephen Rice shot straight at Connor as Town continued to create chances. But Waterford levelled in the 24th minute when Vinny Sullivan played a lovely ball in for Jack Doherty who rounded Hunt before shooting to the back of an empty net.

Minutes later the Town nearly regained the lead but Mark Salmon’s effort came crashing back off the underside of the crossbar. A lapse in concentration from Waterford defender Gary Delaney gifted Longford their second goal on 35 minutes when his clearance fell straight to Kevin O’Connor and the winger released O’Sullivan who hit the target.

Longford nearly grabbed a third goal four minutes later but Connor pushed Pat Flynn’s effort onto the post and the danger was cleared while Stephen Rice had two chances in the early stages of the second half to increase the lead.

The woodwork denied Waterford a goal in the 63rd minute when Conor Whittle’s shot from 20 yards came crashing back off the underside of the crossbar. But the home side levelled matters in the 79th minute; Jack Doherty sent the ball into the area and substitute Willie John Kiely hammered the ball home from close range.

There was to be a final twist as four minutes later the Town scored a wonderful third goal; another substitute Sean Russell passed to Nkololo who gave Connor no chance with a curling effort from 25 yards.