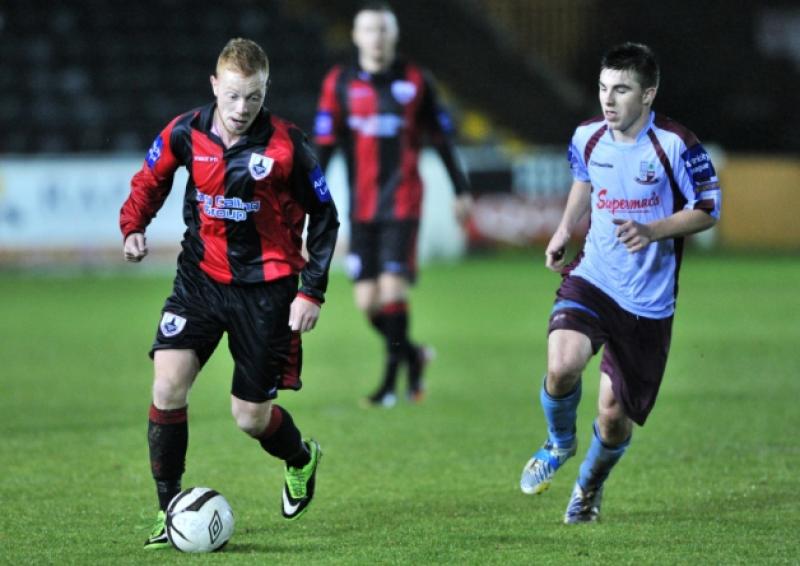 Longford Town advanced to the promotion/relegation play-off with Premier Division side Bray Wanderers after a dramatic penalty shoot-out (3-0) win over a gallant Mervue United side at City Calling Stadium on Friday night last.

Longford Town advanced to the promotion/relegation play-off with Premier Division side Bray Wanderers after a dramatic penalty shoot-out (3-0) win over a gallant Mervue United side at City Calling Stadium on Friday night last.

The Town had worked hard to get back into the game after Mervue took an early lead before outright victory was snatched from the home side right at the end of extra-time when Paul Sinnott got a last gasp goal. Penalties eventually decided this absorbing tie; David O’Sullivan, Derek O’Brien and Ryan Connolly scored for Longford while Chris Bennion saved two of Mervue’s spot kicks.

The attendance in the region of 1,000 definitely felt every emotion during the 120 minutes of football and the Town players showed great character to survive in the fierce battle for Premier Division football next season.

Jason Molloy’s well struck free-kick in the 6th minute put Mervue in control (2-0 ahead on aggregate) but they were lucky not to have been reduced to 10 men one minute later when goalkeeper Conor O’Malley picked the ball up outside his box but just received a yellow card. The Town gradually created a number of chances before deservedly scoring in the 28th minute with a stunning strike from Daniel Purdy.

The home side started the second half well; Ryan Connolly shot narrowly wide and then Dean Ebbe was denied by a Sinnott block. In the 62nd minute Purdy hit the butt of the post as Town continued to press and finally took the lead in the 66th minute when David O’Sulivan put them ahead on the night and level the tie on aggregate (2-2).

Mervue went close on the counter attack in the 77th minute when Gary Shanahan forced Bennion into a good save. Three minutes later Ryan Manning was sent off for a second yellow card offence as Mervue were reduced to ten men.

In the 84th minute Des Hope’s effort hit the crossbar. But Longford did get a third goal in the 103rd minute through David O’Sullivan, only for Sinnott’s last gasp strike to send the tie (3-3 on aggregate) into a penalty shoot-out.