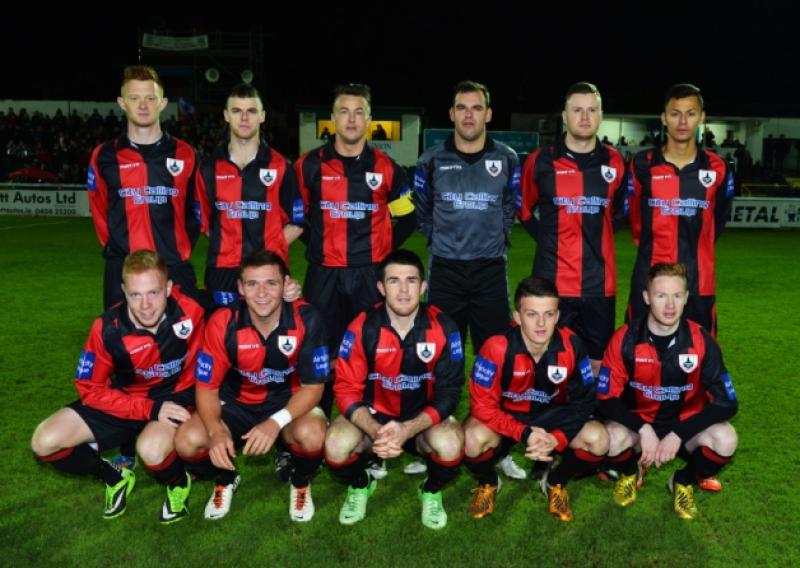 Longford Town came from behind to snatch a dramatic draw against Bray Wanderers in the first leg of the Airtricity League promotion/relegation play-off at the Carlisle Grounds on Monday night last.

Longford Town came from behind to snatch a dramatic draw against Bray Wanderers in the first leg of the Airtricity League promotion/relegation play-off at the Carlisle Grounds on Monday night last.

It was a terrific display from the Town who had played over two hours of football against Mervue United the previous Friday night. After falling behind to a Jason Byrne brace of goals, the Town showed real character and spirit to get back into the game and leave it evenly poised for the second leg at City Calling Stadium on Friday night.

Dean Ebbe had given the Town some hope when he scored in the 61st minute and then seven minutes from time Longford’s leading marksman David O’Sullivan got the equaliser. The scenes that greeted the goal were amazing from both players and supporters. The support on Monday night was exceptional and there were even supporters from other clubs there to cheer on the Town.

Just three minutes had elapsed when Bray thought they had opened the scoring but Byrne’s effort was adjudged offside. Town had a chance in the 6th minute but former Bray player Gary Shaw chipped his effort over the bar.

Longford were then dealt two blows in the space of a minute; first defender Des Hope had to go off injured with a hamstring problem and then just after Jason Byrne broke the deadlock; Kevin O’Connor’s shot came off the crossbar and the ball fell nicely for the vastly experienced striker to shoot home from close range.

Despite Bray having other chances they couldn’t add to that goal and in the 23rd minute Town substitute Gavin Doyle brought a superb save out of Bray keeper Darren Quigley.

Bray doubled their advantage in the 31st minute when Gary Dempsey’s ball over the top found Jason Byrne and with Town keeper Chris Bennion off his line the striker lobbed his shot over him and into the net. It got worse for Longford one minute later when Shaw had to go off injured.

Despite conceding the two goals, the Town worked hard to try and get back into the game. Just after the break Rhys Gorman came close for Longford before they eventually pulled a goal back in the 61st minute when Dean Ebbe found the net with a cracking strike.

Boosted by that goal the Town went in search of the equaliser and began to create chances but were guilty of some poor shooting. Bray looked dangerous when on the attack and in the 75th minute Marty Waters should have restored the home side’s two goal advantage but his shot came off the crossbar.

That miss was to prove costly for Bray and eight minutes later Longford were back on level terms. A free-kick floated into the box by Ryan Connolly was cleared by the Bray defence but the ball broke in front of David O’Sullivan and he made no mistake with a sweet half volley.

Cue jubilant scenes as even keeper Bennion decided to come over and celebrate with the Town supporters. Neither side could get a winner in the final few minutes so it’s all to play for in the second leg at City Calling Stadium on Friday night.