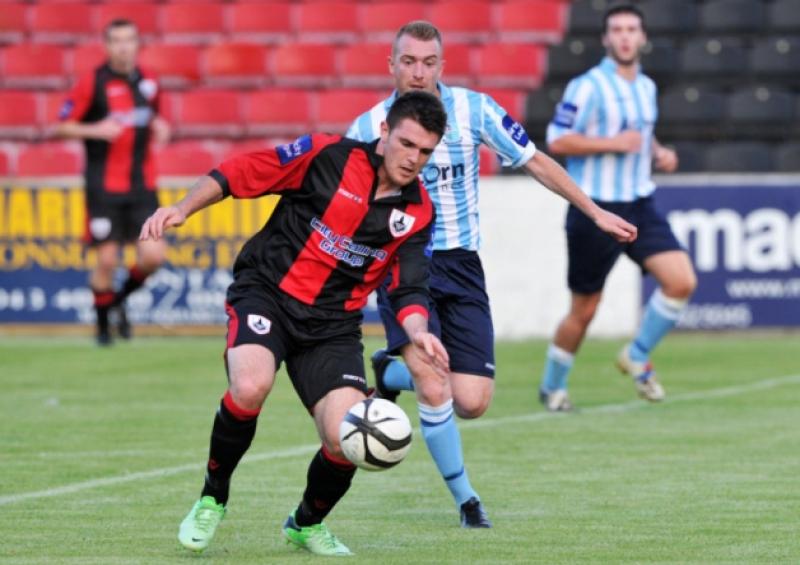 After struggling for quite some time to put away a poor Salthill Devon side, Longford Town won with considerable ease in the end at City Calling Stadium on Saturday evening last.

After struggling for quite some time to put away a poor Salthill Devon side, Longford Town won with considerable ease in the end at City Calling Stadium on Saturday evening last.

Thus the gap at the top of the First Division table remains at five points in the hope of catching Athlone in the race for the league title with just six games remaining. Some very poor results in recent weeks, most significantly the severe setback at home to Athlone, has cost Longford Town very dearly indeed in blowing a nine-point lead at the top but they were never in any real danger of slipping up against Salthill.

Having said that, it was very frustrating for under pressure manager Tony Cousins as he watched his side squander several chances during the course of the game and it was only when substitute Josh O’Hanlon fired home the decisive second goal in the 70th minute that Longford finally began to assert their superiority.

After Salthill missed a glorious opportunity of breaking the deadlock when Brian Geraghty shot wide from close range after Town keeper Chris Bennion parried a shot from Oscar Simbanda, the midlanders were awarded a penalty in the 24th minute when David O’Neill was brought down in the box.

Up stepped David O’Sullivan to make no mistake from the spot kick, much to the relief of the loyal home supporters among the official attendance of 271, but Longford sat back on the cushion of that lead before they eventually sank Salthill Devon.

Gary Shaw mis-kicked in front of the posts when he looked certain to score in the 57th minute and after David O’Sullivan then shot wide a second goal finally materialised when Josh O’Hanlon planted the ball in the back of the net after the Salthill keeper had produced a double save.

From there until the finish Longford played some fine football with David O’Sullivan scoring again in the 75th minute for his 19th league goal of the season and O’Hanlon fired home a brilliantly struck effort from 25 yards out to complete the rout in the 87th minute.