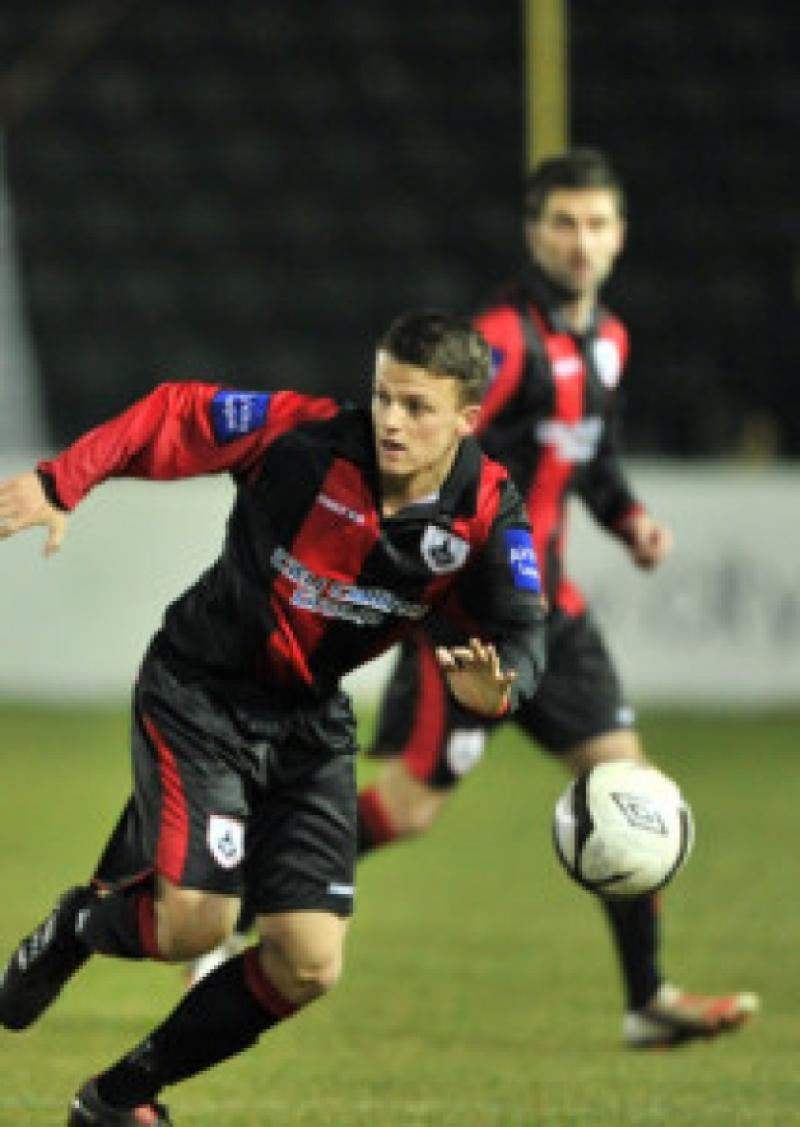 Longford Town staged a remarkable comeback to snatch a vital victory away to Cobh Ramblers in a thrilling encounter at St. Colman’s Park on Saturday night last and thus move back to the top of the First Division table.

Twice in the game Ramblers were two goals in front but the Town fought back and their persistence was rewarded in the third minute of additional time when Daniel Purdy scored the winner – sensational stuff, to say the least.

It had been 13 years since the Town last played in St. Colman’s Park. That was Easter Saturday 2000 when they gained promotion to the Premier Division. There was no major prize on Saturday night last except the three valuable points which could prove to be very crucial in the battle for the league title and the automatic promotion spot.

The Town were missing several players for this trip to Cork and the squad was stretched. But they certainly did not expect the home side’s start to the game as within the opening seven minutes Cobh Ramblers found themselves 2-0 up.

Conor Meade broke the deadlock when he headed past Town keeper Chris Bennion in the 3rd minute and Davin O’Neill, now in his second spell with the club, doubled his side’s advantage in the 7th minute when his volley beat Bennion.

Longford were in a state of shock and tried hard to get back into the game, forcing Ramblers keeper Robert Birdsall into making a double save, but did pull a goal back in the 20th minute when Willo McDonagh headed home from a corner.

That was the way it remained until the break but three minutes into the second half Cobh restored their two-goal advantage when Davin O’Neill scored his second goal and at this stage it looked as though the Town were crashing to their second defeat in a row.

But last season Longford showed resilience and great fighting spirit in battling back to beat Mervue (away) when in much the same situation and those never-say-die characteristics were evident again on Saturday night.

In the 66th minute the Town got their second goal when David O’Sullivan found the back of the net with a superb strike – his fifth of the season. Seven minutes from time Longford got the equaliser; Mark Salmon’s looping header eluded Ramblers keeper Birdsall and bounced off the underside of the crossbar into the back of the net.

Cobh were content to settle for a draw but the Town sensed they could get a win and went in search of a fourth goal. Just when it looked like this dramatic game was going to end all square, Longford substitute Daniel Purdy got the winner with virtually the last play of the game and the amazing comeback was complete.

This Saturday night (6th April) the Town welcome Mervue United to City Calling Stadium in a top of the table clash. The Galway club have made a great start to the season and are always a hard side to beat but the Longford players will be brimming with confidence after the result in Cobh and hopefully a good crowd will come out and show their support for the Town team who are endeavouring to play attractive football.