Longford Town have to settle for
a point against
Sligo Rovers 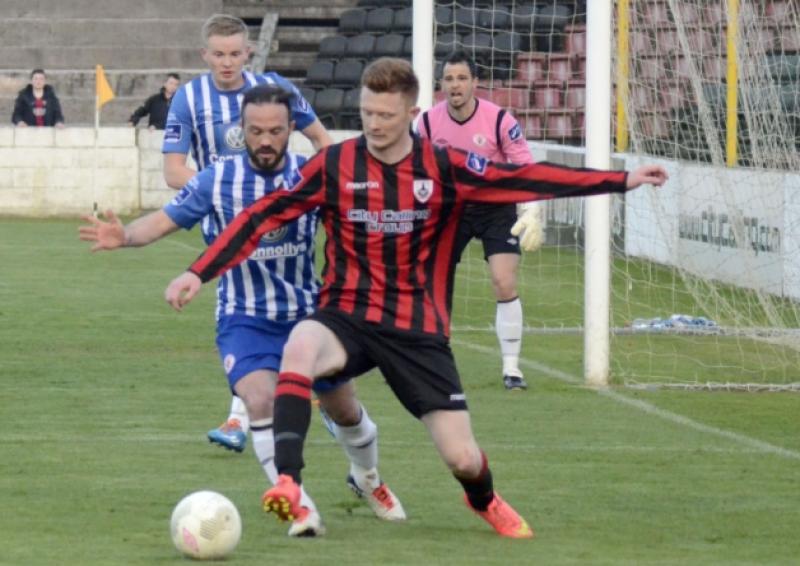 Longford Town and Sligo Rovers played out a boring score draw as two wonderful first half strikes were the only thing to liven up this dull Premier Division encounter at City Calling Stadium on Friday night last.

Longford Town and Sligo Rovers played out a boring score draw as two wonderful first half strikes were the only thing to liven up this dull Premier Division encounter at City Calling Stadium on Friday night last.

With chances at a premium in the first half the game opened up in the 40th minute when the Town took the lead through Kevin Oâ€™Connorâ€™s excellent strike from about 35 yards out. But the lead didnâ€™t last too long and David Cawley matched Oâ€™Connorâ€™s strike to equalise for Sligo in the 44th minute.

After the disappointing result and performance against Bohemians in their previous game, many felt the Town could bounce back against their near neighbours who have struggled so far this season. But Longford didnâ€™t exert any real pressure throughout and the tactics were negative with just Gary Shaw up front on his own.

The only keeper that was tested in the opening exchanges was Townâ€™s Paul Skinner who pulled off a good save to deny Morten Nielsen in the 8th minute. Minutes later John Russellâ€™s effort for Sligo was turned over the bar by Town defender Willie Tyrrell.

Longford enjoyed good passages of play but failed to create anything of note but out of nothing they took the lead five minutes from the break when Stephen Rice played a free-kick into the path of Kevin Oâ€™Connor and the midfielder scored a fantastic goal from distance.

Four minutes later the sides were level when David Cawley fired home a fantastic goal for the equaliser.

The early exchanges of the second half saw neither side carve out any real scoring opportunities. Nielson shot over for Sligo in the 57th minute after some hesitancy in the Town defence.

The lively Longford winger Ben Mohamed was unlucky that his effort lacked real power in the 60th minute and Sligo defender Gary Boylan was able to clear the ball off the line. Ben Mohamed opened up the Sligo defence on a number of occasions and was a real threat for the Town. Gary Shaw should have done better with his header in the 62nd minute.

Sligo then created chances and in the 73rd minute Town defender Pat Flynn blocked Nielsonâ€™s shot before Skinner superbly tipped a shot from substitute Danny Ledwith over the bar.

Raff Cretaro was unlucky four minutes later; Ledwithâ€™s cross appeared to be falling perfectly for the winger but he just couldnâ€™t get a decent header on the ball.

Gary Shaw had another chance for the Town in the 83rd minute; Lorcan Shannonâ€™s perfect cross from the left met the head of Shaw but he directed his effort over the bar.

With time running out both teams tried to grab a late winner with the visitors creating the better of the chances. Ben Mohamed had to go off with cramp in the 72nd minute and his pace was sorely missed. Not pushing another player up front was a missed opportunity for the Town.

In the 84th minute Cretaro should have done better with his strike; he decided to shoot from distance but failed to trouble Skinner.

The best chance in the closing stages came in the 88th minute when Alan Keane had a great chance for Sligo; Ledwithâ€™s header was missed by many in the box but found the unmarked Keane at the back post but he put his effort wide.

That was to be the last chance of a game that failed to warm supporters on a cold night and on the balance of play a share of the spoils was a fair result.