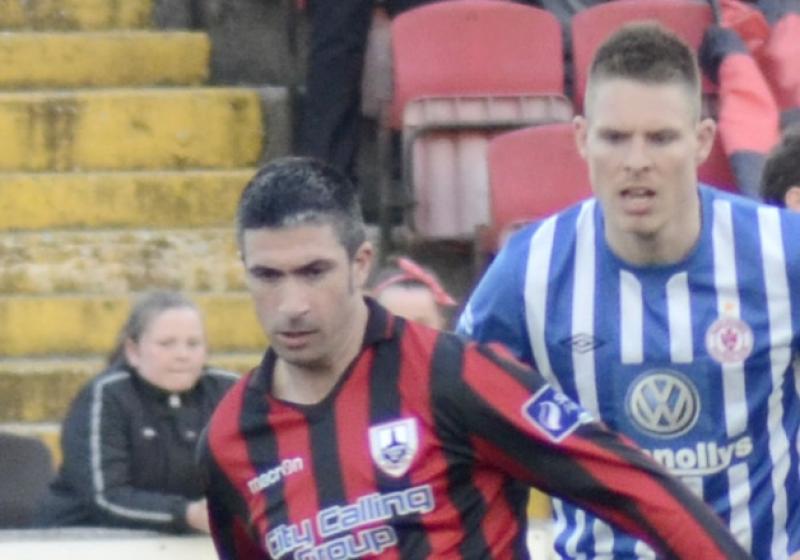 Goals in each half gave Cork City victory over Longford Town in the Premier Division league clash at Turnerâ€™s Cross on Monday night last. It was the first of two away games this week for the Town who travel to Drogheda on Friday night.

Goals in each half gave Cork City victory over Longford Town in the Premier Division league clash at Turnerâ€™s Cross on Monday night last. It was the first of two away games this week for the Town who travel to Drogheda on Friday night.

It was an expected win for title chasers Cork but Longford striker Gary Shaw had an early chance to break the deadlock in the 3rd minute and then Pat Flynn tested City keeper Mark McNulty with a header in the 8th minute.

The home side then began to take a hold of the game but for all their possession they failed to test Town keeper Paul Skinner. The visitors tried to catch City on the counter attack with Stephen Riceâ€™s shot going over the bar in the 36th minute. Minutes later Shawâ€™s shot was blocked by Cork defender Dan Murray and from the resulting corner Rice headed over.

Longford were to rue not putting away their chances when City opened the scoring in the 42nd minute; Skinner denied Billy Dennehy with a fine save but Garry Buckley was on hand to head home. And just before the break Mark Oâ€™Sullivan headed just wide from Dennehyâ€™s crsss.

Stephen Rice had another chance for the Town five minutes into the second half after he was set up by Martin Deady but the effort was blocked. Dennehy, Oâ€™Sullivan and Miller all had chances for Cork before they eventually doubled their advantage in the 67th minute when Colin Healyâ€™s free-kick ended up in the back of the net.

Billy Dennehy could have made it 3-0 two minutes later but his effort went wide as City began to assert their authority. They were completely on top and wouldnâ€™t allow the Town into the game.

After being completely outplayed in the second half, Longford had a chance in the 74th minute when Kevin Oâ€™Connorâ€™s cross was headed wide by Stephen Rice.

Cork subtitute Robert Lehane was set up by Dennehy in the 82nd minute but Skinner done well to get to the ball ahead of the Kerry man.

John Kavanaghâ€™s strike went wide in the 85th minute and then Town created a late chance when Kalem Simonâ€™s cross met substitute David Oâ€™Sullivan but his shot was saved by Mark McNulty. The final chance of the game fell to Kevin Oâ€™Connor whose shot sailed over the bar.