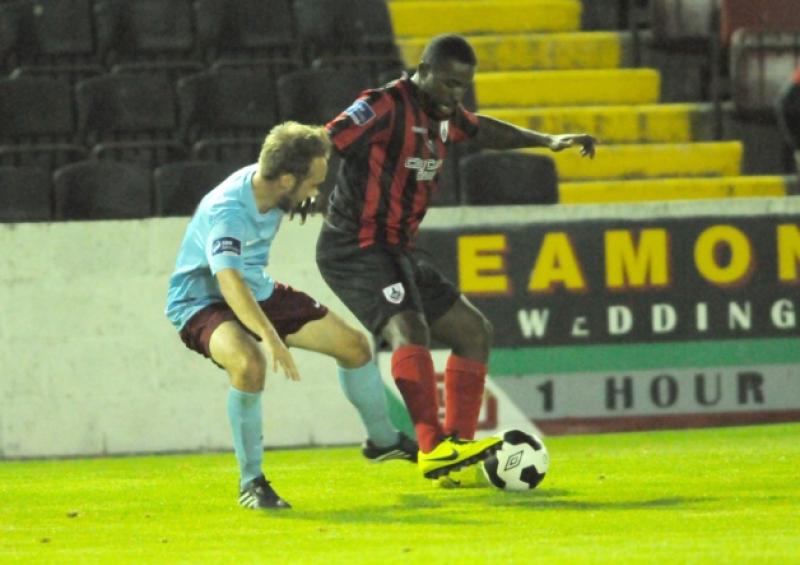 After being knocked off the top of the First Division table for 24 hours Longford Town returned to the summit with a win over bottom side Cobh Ramblers on Saturday night.

After being knocked off the top of the First Division table for 24 hours Longford Town returned to the summit with a win over bottom side Cobh Ramblers on Saturday night.

It wasnâ€™t vintage stuff from the Town but a winâ€™s a win and they now look forward to a trip to Waterford on Friday night.

Despite their lowly position Cobh really put it up to the Town; they took the lead on 18 minutes and after Town had gone 2-1 up the Cork side levelled the game in the 63rd minute.

Townâ€™s third goal knocked Cobh a little while the fourth one settled everyoneâ€™s nerves in the ground.

It was Townâ€™s first win since August 1 and their first one at home since July 26.

Town created the first chance on goal in the eighth minute but David Oâ€™Sullivan dragged his shot across the face of the goal. Two minutes later Lorcan Shannon brought a save out of Cobh keeper David Browne.

Although they had possession Town failed to really create anything much after that. Gary Shaw got injured in the 16th minute but instead of putting the ball out of play both teams continued playing.

It was to be a mistake by Town because in the 18th minute the visitors broke with Martin Deady playing a neat one-two with Kynan Rocks before finishing from close range.

The goal silenced the small home support and it took Town a while to get any sort of rhythm going. In the 10 minutes before the break they starting applying pressure and eventually equalised in the 39th minute through Stephen Rice.

In a hectic 12 minute spell in the early stages of the second half three goals were scored; Town took the lead in the 57th minute when Shannonâ€™s cross eluded Cobh netminder Browne and ended up in the net.

Town defender Pat Flynn stood tall to stop Rocks in the 62nd minute but one minute later Alan Oâ€™Flynn levelled when he intercepted a poor backpass.

But six minutes later Town went back in front when Peter Hynes found the back of the net for his first goal of the season.

Cobh were still a threat and Town really needed another goal to settle the game and that came in the 86th minute; good play between Oâ€™Sullivan and Hynes ended with Mark Salmon finishing to the net to claim another win in the quest for promotion.