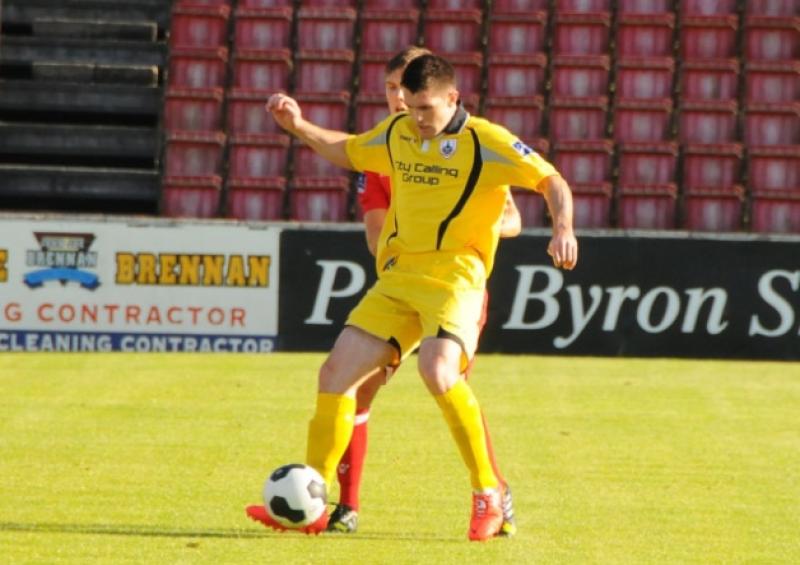 Longford Town extended their unbeaten run in the First Division league to eight games as two first half goals gave them a deserved win over a disappointing Wexford Youths side at Ferrycarrig Park on Friday night last.

Longford Town extended their unbeaten run in the First Division league to eight games as two first half goals gave them a deserved win over a disappointing Wexford Youths side at Ferrycarrig Park on Friday night last.

The Town were in complete control throughout with the home side offering very little resistance. But for poor finishing and excellent goalkeeping from Wexford keeper Graham Doyle the winning margin would have been wider.

An own goal and a well-hit strike from Gary Shaw proved to be the difference as Townâ€™s defensive unit were resolute once more to help them keep another clean sheet; their seventh in a row (including the FAI Cup game v Athlone). Longford have not conceded a goal in the league since May 23rd.

Despite having the majority of the early possession, the Town failed to trouble Doyle in the Wexford goal and didnâ€™t create anything of note. But they eventually broke the deadlock in the 24th minute when a David Oâ€™Sullivan cross from the left was turned into his own net by Youths defender Ryan Delaney.

Gary Shaw then brought a fine save out of Doyle minutes later before Oâ€™Sullivan was very unlucky not to get on the scoresheet; a perfect cross from Willie Tyrrell found the head of Oâ€™Sullivan but his effort came off the butt of the post.

The Town continued to press hard for a second goal and it came three minutes before the break; Oâ€™Sullivan was the provider for Shaw to coolly finish from just inside the box. It was the Kildare ladâ€™s third goal in three games and he is in fine form.

The Town continued to dominate in the second half. Oâ€™Sullivan was unlucky to see his dipping shot go over the crossbar in the 49th minute and minutes later Shaw flicked the ball into the path of Don Cowan but he was way off target with his shot.

Stephen Rice then had a chance that was deflected out for a corner before Cowan was denied on the hour mark by an excellent save from opposing keeper Doyle as the Town piled on the pressure.

Wexford tried to break on the counter attack but the solid Longford defence stood firm as the home side were forced to blast a few efforts over the bar.

Right at the end, Town substitute Peter Hynes squandered a great chance to grab his sideâ€™s third goal when in front of an open goal but he headed wide when it was easier to score.