Longford Town suffer another setback in losing out to Shelbourne 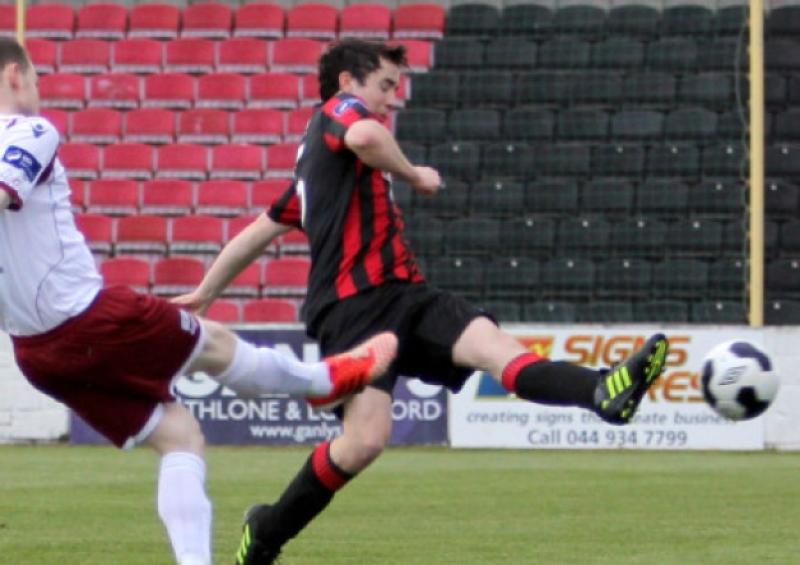 Longford Town lost further ground in the race for the First Division title when they suffered another setback against the league leaders Shelbourne who came out on top at Tolka Park on Friday night last.

Longford Town lost further ground in the race for the First Division title when they suffered another setback against the league leaders Shelbourne who came out on top at Tolka Park on Friday night last.

The Town had to play the majority of the game with only 10 men after goalscorer Chris Deans was sent-off in the 24th minute for something that was only seen by linesperson Paula Brady. The lack of protests from the Shelbourne bench and supporters tells its own story but whatever Brady saw she alerted referee Keith Callanan who was only too eager to show Deans a red card.

Deans dismissal had a huge effect on the game, according to Town manager Tony Cousins: â€œThe sending off killed us. Itâ€™s something we have to look at; they have CCTV here. Unfortunately the linesperson is 60 yards away which is surprising that a decision is made. If thatâ€™s the case we are going to have penalties and sendings off every week.â€

It could have been a different story if Deans had not been sent off but it was only after going 3-1 down that the Town started to create real chances and in the final minutes of the game they put the Shelbourne defence under a lot of pressure.

The introduction of Gary Shaw for the ineffective Sean Russell in the 70th minute really changed Townâ€™s dynamic. It was amazing that yet again the striker had to wait until the final 20 minutes of the game to get his chance. The omission of one of Townâ€™s best players so far this season, Rhys Gorman, was also a baffling decision by the management.

Cousins was delighted with the performance his players put in despite the defeat: â€œThey were magnificent. Our supporters were magnificent. We nearly snatched a draw in the finish after playing well. Fellas were determined, giving absolutely everything they had, and they were shattered at the end. I think people saw against Shels the great spirit that exists in the squad.â€

Shelbourne took the game to the Town right from the start and created several chances in the opening exchanges. In the 2nd minute Town netminder Chris Bennion brought off a good save to deny Dylan Connolly. Soon after Philip Hand tested Bennion but he was able to make the save and avert the danger.

Longford were finding it hard to get a grip on the game and a Stephen Rice shot over the bar in the 7th minute was their only real effort early on. Although Shelbourne were on top they found themselves 1-0 down in the 18th minute when Chris Deans powerfully headed home a Sean Russell corner.

Shelbourne very nearly responded with the equaliser but Lee Murtagh shot over when right in front of goals. In the 24th minute the Town were dealt a huge blow when Deans was shown a controversial red card.

Longfordâ€™s gameplan then turned defensive as Shels tried to exploit their numerical advantage. In the space of nine minutes Darren Tinnelly tested Bennion twice and it was a case of third time lucky for Tinnelly in the 41st minute when he scored the Shels equaliser.

Just like the first half, Shels started the second half very well with former Town player Keith Quinn firing over the bar in the 51st minute before Longford striker David Oâ€™Sullivan directed a header narrowly wide in the 55th minute

Quinn had another attempt for Shels before Jamie Mulhall gave a free-kick away in the 64th minute and Gareth Coughlan made no mistake with a stunning strike into the back of the net.

In the space of a minute the Town went from nearly equalising through another Oâ€™Sullivan header to going further behind when Dylan Connolly made it 3-1 to Shels in the 67th minute.

To their credit, the Town tried hard to get back into the game and Kevin Oâ€™Connor scored in the 82nd minute to close the gap. After that Noel Haverty brought a save out of opposing keeper Greg Murray while Stephen Rice shot wide in injury-time as Shels held out for a vital victory.

Despite the defeat Tony Cousins was still optimistic. â€œWe are nine points behind but we have a game in hand (against Cobh) with a chance of closing the gap. We have to play Shels another couple of times so itâ€™s very early days. I feel that we are starting to motor and there is no way we would have lost that game if we hadnâ€™t a man sent off.â€