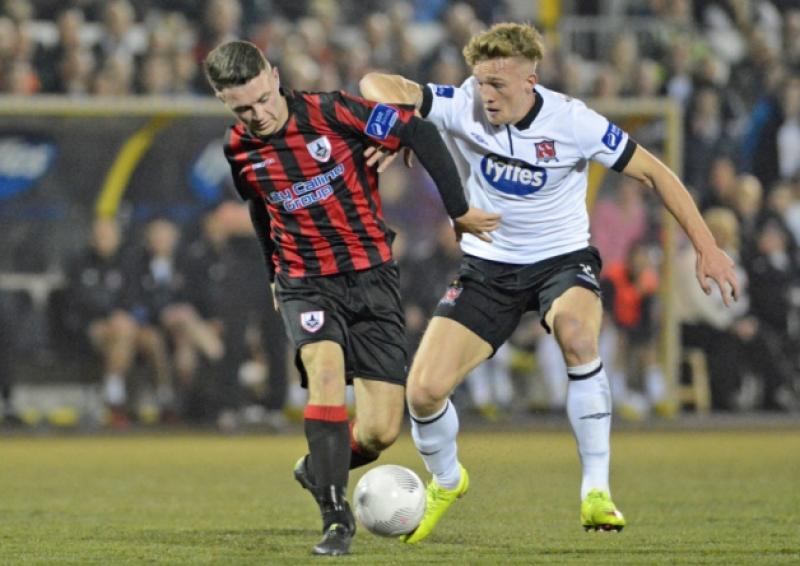 The odds were stacked against Longford Town springing a sensational shock in the FAI Cup semi-final at Oriel Park on Friday night last and so it proved as dominant Dundalk won their way through to the decider at the Aviva Stadium.

The odds were stacked against Longford Town springing a sensational shock in the FAI Cup semi-final at Oriel Park on Friday night last and so it proved as dominant Dundalk won their way through to the decider at the Aviva Stadium.

While the reigning Premier Division league champions were generally in a different class as they enjoyed the vast majority of the possession, it took Stephen Kenny’s powerful side quite some time to break down the brave resistance provided by resolute Longford.

Manager Tony Cousins had no other choice but to opt for a tight defensive gameplan against superior opposition with Gary Shaw operating as the lone striker up front and the tactical battle was beginning to frustrate Dundalk in their search for a goal.

The home supporters among the official 3,526 attendance were getting on edge and particularly so when midfield general Richie Towell struck a shot against the crossbar in the 31st minute. The tremendous Towell and the equally effective Stephen O’Donnell (winner of the man-of-the-match award) were the driving force behind the latest Dundalk win.

There was obviously a lot of relief in Oriel Park when the deadlock was eventually broken in the 36th minute from a setpiece. A Daryl Horgan corner (won by John Mountney) was finished to the back of the net by the head of central defender Paddy Barrett past Pat Sullivan on the line and this cracking goal left Longford Town facing a real uphill battle.

With Cousins still sticking to the same gameplan in the hope of somehow engineering the equaliser, a stroke of bad luck in the early stages of the second half gifted Dundalk a second goal that put the issue well and truly beyond all doubt.

The always dangerous Horgan played a delightful ball into the box that picked out Ronan Finn and his subsequent shot was deflected by unfortunate Town defender Pat Sullivan past the stranded away keeper Paul Skinner.

That was a shattering blow from which Longford never recovered and while Cousins eventually changed the formation by bringing on David O’Sullivan in the 59th minute to link up with Gary Shaw in the attack, the damage was already done by Dundalk who cruised through the remainder of a disappointing match.

The Town, to their credit, did battle it out to the bitter end but lacked a real cutting edge as a couple of half chances were squandered by Lorcan Shannon and defender Noel Haverty, the latter blasting his shot well wide.

There was a late glimmer of hope when David O’Sullivan cut in from the left, only to shoot straight at Gary Rogers in the 82nd minute, and the competent Dundalk keeper dealt comfortably with a Gary Shaw strike from a tight angle in the 88th minute.

Scoring goals is becoming a serious problem for Longford Town in recent weeks, which begs the question as to why David O’Sullivan continues to be left on the bench by Tony Cousins. Surely the under pressure manager must start last season’s top marksman in the First Division against Sligo Rovers in a massive league clash at City Calling Stadium on Saturday night next.

When you consider how little Lorcan Shannon and Kaleem Simon had to offer along the wings against Dundalk, there has to be places in the first eleven for both O’Sullivan and Shaw against Sligo (just two points behind the Town) in a game that Longford cannot afford to lose with things so tight in the bottom half of the table.

Having said that, a win for the Town would almost guarantee Premier Division survival in what has developed into a desperate situation and the FAI Cup was a distraction.

But that is no longer the case with all conquering Dundalk now looking forward to their first appearance in the final since they last won the cup back in 2002. And had Ciaran Kilduff not missed a glorious close range opportunity for the home side in the 5th minute of the last four showdown on Friday night last, it would probably have resulted in a much heavier defeat for Longford as Dundalk created a number of other decent chances.

Apart from a poor effort from Mark Salmon who shot tamely into the arms of Dundalk netminder Rogers in the 19th minute, the Town were never a threat but their cause was badly hampered by the absence of Kevin O’Connor (suspended) and Ayman Ben Mohamed (injured) who were sorely missed.

And when you add the names of Pat Flynn and Don Cowan (both out of action long term) to the casualty list, not forgetting the cup-tied duo Dean Kelly and Jack Doherty, it was virtually a mission impossible for Longford Town in the cup semi-final at Oriel Park.

Fair play to the vociferous away fans for getting behind their team in the face of adversity against Dundalk last weekend but far greater support is needed through the turnstiles at City Calling Stadium, starting with the so crucial league game against Sligo Rovers in the quest to secure Premier Division status.