Longford Town unlucky to end up with nothing against Shamrock Rovers 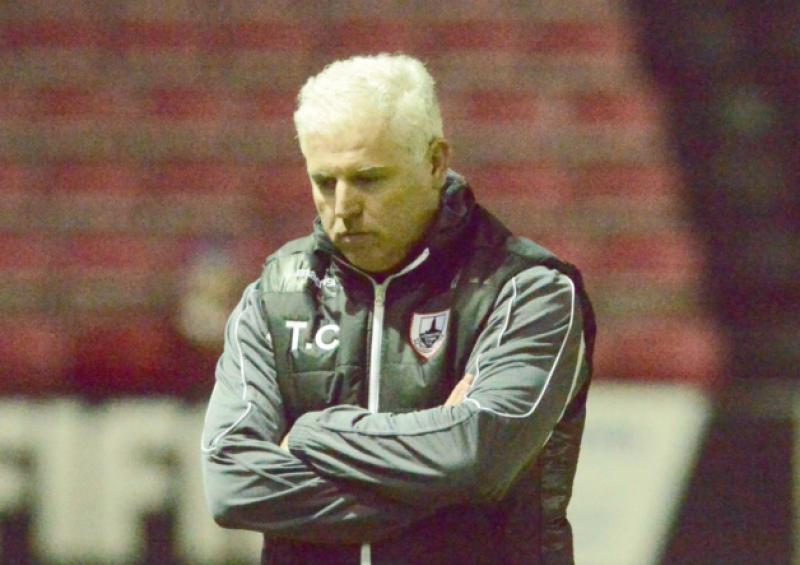 A brave battle from Longford Town wasn’t enough against Shamrock Rovers who were rather fortunate to collect all three league points in the Premier Division league clash at Tallaght Stadium on Friday night last.

A brave battle from Longford Town wasn’t enough against Shamrock Rovers who were rather fortunate to collect all three league points in the Premier Division league clash at Tallaght Stadium on Friday night last.

Despite falling behind to an early Gavin Brennan goal, the Town worked hard to level matters through Pat Flynn and had chances after that to take the lead but they were left to rue missed opportunities.

Rovers went 3-1 up and while a late goal from substitute Kalem Simon gave Longford a glimmer of hope, they just couldn’t get the equaliser their performance deserved.

Six minutes were gone on the clock when the home side took the lead; Brendan Miele’s shot was saved by Town keeper Paul Skinner but the ball fell to Brennan and he made no mistake to find the back of the net.

Longford had a chance after that to level when Pat Sullivan’s cross wasn’t cleared by Rovers keeper Craig Hyland but there was no one there to pounce on the breaking ball.

The Town continued to frustrate the home side and got the equaliser in the 32nd minute when central defender Pat Flynn headed home Mark Salmon’s corner after David O’Sullivan’s shot was blocked by Max Blanchard.

Danny North then had a chance for Pat Fenlon’s side but his effort lacked power and it went wide. Former Shamrock Rovers favourite Stephen Rice then had a great chance to put the Town ahead in the 34th minute but his shot was just off target.

Gary Shaw then had a glorious opportunity to put Longford ahead when he was through with only Hyland to beat in the 42nd minute but the Town striker dragged his shot narrowly wide when he should probably have scored.

After surviving those scares, Shamrock Rovers upped their game in the second half. Michael Drennan got into the box and directed the ball into the path of Danny North but he was unable to get a vital touch.

Pat Cregg then played in Drennan but his low cross was cleared by the Town defence as Rovers began to create more chances. Another opportunity fell to North minutes later but his weak shot just went wide.

Keith Fahey then burst through from midfield but his shot was saved by Paul Skinner and Drennan went close as under pressure Longford were finding it difficult to hold out.

Rovers eventually got their second goal in the 68th minute when Max Blanchard scored after the Town defence fail to clear a corner from Gavin Brennan. Former Bray player Kieran Marty Waters then set up the decisive third goal in the 73rd minute when his free-kick was headed home by the unmarked Blanchard.

But in between those two goals, Longford had a strong claim for a penalty turned down by referee Derek Tomney when Blanchard appeared to trip Gary Shaw in the box just as he was about to shoot in a goal chance. No spot kick was given, much to the anger of Town manager Tony Cousins who was sent to the stand for his protests.

Stubborn Longford never gave up the fight and pulled a goal back in the 83rd minute when substitute Kalem Simon was on target to ensure a nervy finish for the home side.

Marty Waters had a chance in stoppage time to score a fourth goal for Shamrock Rovers when his shot clipped the post but they had already done enough to secure the victory.

By virtue of this defeat, Longford Town slip to seventh in the table with fellow promoted side Galway United moving ahead thanks to their win over Bohemians.