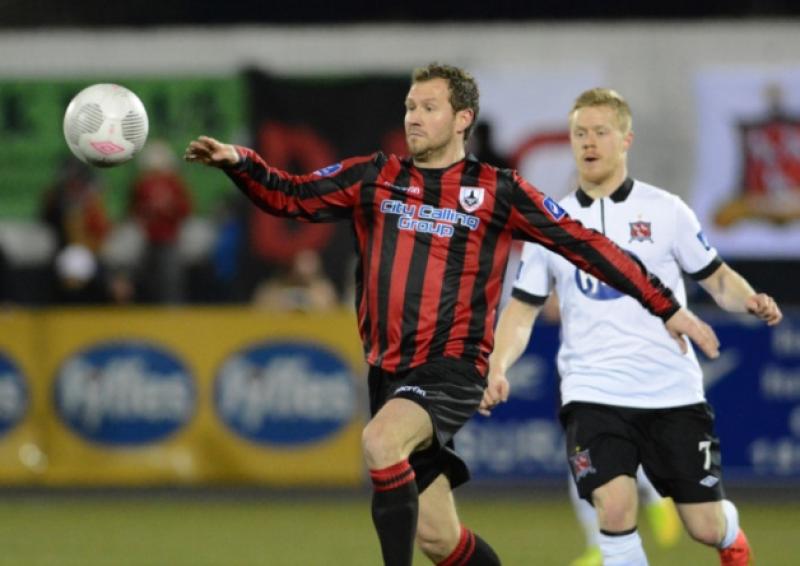 Going to the home of the league champions Dundalk in the opening fixture was always going to be a most difficult task for Longford Town on their return to the Premier Division for the first time since 2007 at Oriel Park on Friday night last.

Going to the home of the league champions Dundalk in the opening fixture was always going to be a most difficult task for Longford Town on their return to the Premier Division for the first time since 2007 at Oriel Park on Friday night last.

But the newly promoted midlanders, after being under considerable pressure for most of the second half, almost made a point with a couple of glorious chances falling to David O’Sullivan and Gary Shaw (the latter denied by the crossbar) in a frantic finish and Dundalk were very relieved to hear the sound of the final whistle.

Stephen Kenny’s side broke the deadlock in the 16th minute when Daryl Horgan fired home the only goal of the game in a poor first half and they should really have put the issue beyond all doubt after creating several chances to score a killer second goal on the changeover.

Thanks to a couple of great saves by substitute keeper Paul Skinner (who replaced the injured Paul Hunt in the 29th minute) with the crossbar also coming to the rescue in the second half to keep out a powerful header from Dundalk defender Andy Boyle, the Town still had a glimmer of hope in the quest to snatch a dramatic draw.

Surprisingly, David O’Sullivan had to settle for a place on the bench with manager Tony Cousins opting for a cagey 4-5-1 formation to keep it tight away from home - Gary Shaw operating as the lone striker.

But O’Sullivan was eventually brought on in the 61st minute to offer a greater attacking threat as did the third substitute used at Oriel Park - lively left winger Aymen Ben Mohamed who was introduced in the 74th minute.

With the clock ticking down, some panic began to creep into the Dundalk side in protecting such a slender lead and they were almost punished for their failure to finish off Longford Town.

In the 89th minute O’Sullivan worked his way into a goal scoring position inside the box but Dundalk netminder Gary Rogers saved the subsequent shot with his feet and the danger was eventually cleared.

And there was further despair for the Longford Town supporters in stoppage time when a deflected close range Gary Shaw strike was heading for the roof of the net - only for the agile opposing keeper to get a vital touch in directing the ball against the crossbar.

Rogers was very much the saviour for the jittery champions in producing those two great saves in the tense and exciting closing stages and it was hard luck on Longford not to get a result in the end.

Having said that, the Town showed a lot of spirit in refusing to give up the fight in a fierce battle that unfolded in front of the official attendance of 3,336 who flocked to Oriel Park for the new season starter.

On the way into the Dundalk grounds on Friday night last, the buzz of being back in the Premier Division was felt by all the Longford Town followers who made the trip to the Co Louth venue and this was the first time since 2002 that the clubs clashed in the top flight.

Apart from the absence of defender Jamie Mulhall, who has been out of action for quite some time, injury also prevented Don Cowan from playing any part against Dundalk and the attacker is apparently set to miss the first home league game of the season next Saturday night against Shamrock Rovers.

The only highlight in a very scrappy first half that was spoiled by the swirling wind was the excellent right wing cross from Ronan Finn that picked out Daryl Horgan at the far post and he made no mistake to find the back of the net from close range.

Slack defending by Longford Town, who suffered another setback when goalkeeper Paul Hunt was forced to retire injured following a clash with Dundalk striker David McMillan who got away with a rather robust challenge.

The match did improve considerably in the second half as the home side upped the tempo in a determined bid to score a second goal but they were met with fierce resistance from the resolute Longford central defenders Pat Flynn and Willie Tyrell while replacement keeper Paul Skinner saved superbly from David McMillan (52 mins) and Richie Towell (85 mins).

A header from Andy Boyle hit the crossbar (58 mins) while the other big Dundalk centre-half Brian Gartland had his effort (71 mins) cleared off the line and it all became very frustrating for the title holders who were almost caught out in the end with David O’Sullivan and Gary Shaw going so close to snatching a last gasp equaliser.