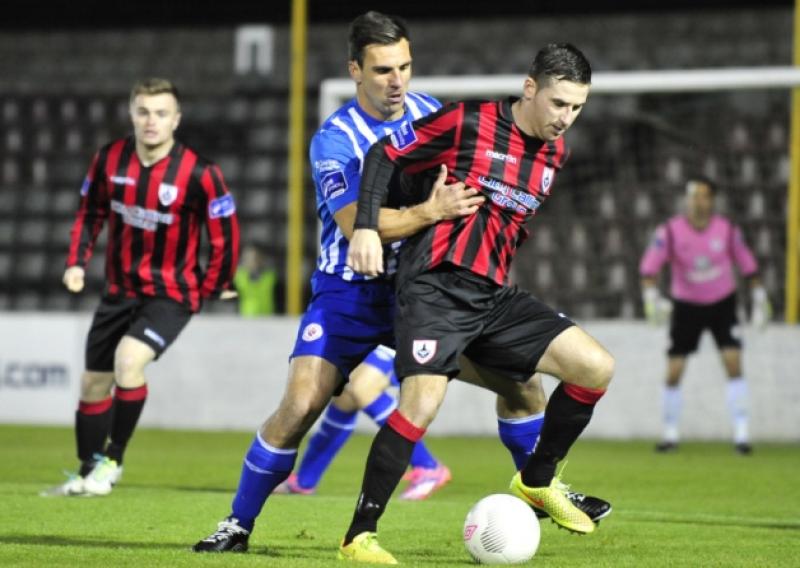 Having the benefit of numerical advantage for most of this relegation battle after Rovers defender Tim Clancy was sent-off in the 25th minute, the Town should really have collected all three valuable points but they struggled to gain the upper hand against the generally superior Sligo side.

Unfortunate not to be ahead at the break with Raffaele Cretaro hitting the post in the 35th minute, the visitors were working extremely hard to get something out of the game but gradually faded in the second half and were apparently settling for a share of the spoils.

But Longford Town eventually broke the deadlock in the 82nd minute when a close range shot from substitute Kaleem Simon, following a goalmouth scramble, ended up in the back of the net after deflecting off opposing keeper Richard Brush.

The Rovers defence failed to cut out a cross from Philip Gannon and were looking set to stay stuck in the second from bottom position in the league table before they were thrown a lifeline in the 90th minute.

After advancing well off his line, Longford keeper Skinner did not deal with the danger after a speculative high centre was floated into the box by Jason Hughes and under pressure from another Sligo substitute Anthony Elding the ball ended up in the back of the net, much to the sheer dismay of the home supporters among the estimated 1,300 attendance.

With so much at stake, a most disappointing feature was the fact that the Town fans were greatly outnumbered by the large contingent of Sligo followers who made the relatively short trip to the midlands to cheer on their side and it was a rather demoralising situation, to say the least, for the home club.

One wonders have the Longford sporting public got the appetite any more for League of Ireland soccer as the average home attendance this season has been around the 500 to 600 mark when the gates were expected to be a lot bigger on the supposedly eagerly awaited return to the Premier Division for the first time since 2007.

The pressure is now firmly on the Town to avoid the drop back down into the dreaded First Division and with more difficult fixtures to come away to Cork City and Drogheda United, the fierce fight to remain in the top flight could all hinge on the outcome of the final game of the season against Derry City at City Calling Stadium on Friday October 30th.

Just six points separate seven clubs at the wrong end of the table and it remains to be seen whether the Town will manage to survive. The loss of the suspended Stephen Rice on Saturday night was a big blow but Sligo were also without one of their key players, Sander Puri, who was on European Championship qualifiers international duty with Estonia.

Looking at the overall quality of the Rovers squad, and particularly exciting left winger Jennison Myrie-Williams who was a constant threat, it’s a mystery how Sligo ended up in relegation trouble and they dominated the first half against Longford even after they were reduced to ten men.

Alan Keane shot just over the bar before Raffaele Cretaro had a goal attempt blocked down by Town defender Conor Powell in the early stages of the game and there were a few other close calls with Gavin Peers having a header cleared off the line by Philip Gannon in the 31st minute.

But before that Tim Clancy clashed with Gary Shaw and after losing his cool in a subsequent fracas, referee Sean Grant issued a straight red card to the Sligo centre half and it must be said that Shaw was fortunate to get away with a yellow card.

Advantage Longford one would have thought and they almost scored in the 32nd minute when Shaw got a touch on a right wing cross from Noel Haverty but Sligo defender Keane came to the rescue in clearing the ball off the line.

Soon after Cretaro hit the post for the visitors and with time running out in the first half Ayman Ben Mohamed had a decent opportunity for Longford but his sweet strike was just off target.

The Town, to their credit, came a lot more into the game on the changeover to create a few chances but continue to lack a real cutting edge in attack. Striker David O’Sullivan, out of favour with manager Tony Cousins, had to be content with a place among the substitutes although he was introduced in the closing stages of the contest.

Gary Shaw did succeed in getting a shot on target in the 69th minute but he struck the ball straight at the Sligo keeper Richard Brush and after Dean Kelly directed a header wide, Longford finally scored when Kaleem Simon finished the ball to the net in the 82nd minute. With the extra man, that should have been enough to secure a vital home victory but Sligo never lost hope.

After Anthony Elding went close with a header his perseverance was rewarded when he forced Longford keeper Paul Skinner into making a bad mistake and the Rovers striker was credited with the goal that left the sides all square at the final whistle.