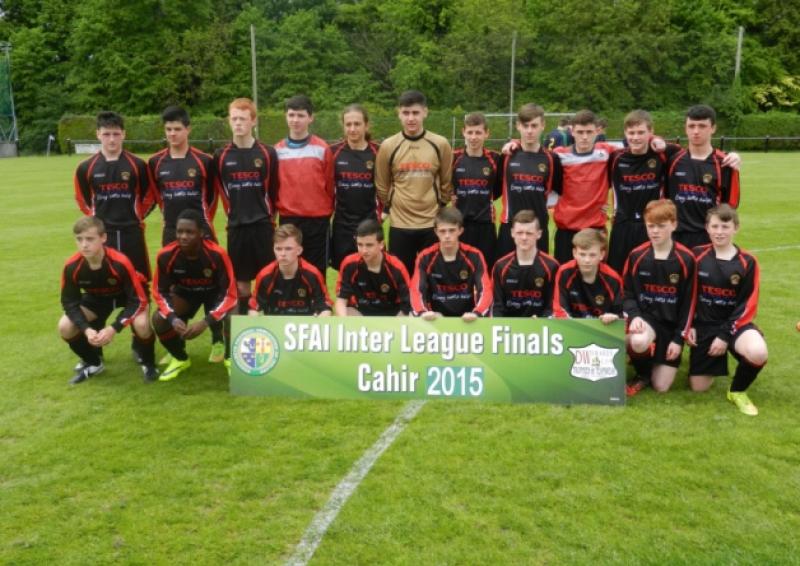 U-15 All-Ireland Inter-League Soccer Final: Longford & District League 0 Inishowen League 2 Two goals in quick succession midway through the second half proved to be the downfall of Longford in their quest for a first Inter League title at a splendidly laid out Cahir Park, Co Tipperary on Saturday.

Two goals in quick succession midway through the second half proved to be the downfall of Longford in their quest for a first Inter League title at a splendidly laid out Cahir Park, Co Tipperary on Saturday.

The Longford lads enjoyed the trimmings of stardom. Travelling down on Friday evening, being introduced to the local officials before kick-off and standing tall and proud during the playing of the national anthem.

Michael O’Donnell saw action early getting down to save after two minutes. Minutes later Longford had their first chance a Dylan Glancy free was headed on by Diarmuid Sheahan and the Inishowen keeper pushed it over the bar. Oisin McLoughin’s corner was headed over by Evan O Connor. O Donnell’s long clearances had the Inishowen defence in trouble. The crisp tackling of Glancy and the clever wing play of McLoughlin also caught the eye. O’Connor and Konrod Wiechec cut out any danger.

Longford continued on the front foot. Dwight Kelly picked out Connell McKiernan with a perfect pass and McKiernan tested the keeper from the edge of the box. Eoin Gray and Joe Hagan exchanged passes before a McLoughlin cross went a begging in front of goal.

Longford’s best chance saw Glancy and McLoughlin involved with the Leitrim lad getting to the end line before crossing, the ball fell to Aidan Maguire with his back to goal and the Ballymahon striker produced a splendid overhead kick to hit the crossbar. Longford were well on top but the goal refused to come.

Into the second half and Longford continued to impress with Kelly playing a captain’s part. Gray looked to be enjoying himself. O’Connor and Wiechec were solid. Further afield Glancy was running himself to a standstill. McLoughlin, while he picked up an injury, was a bag of tricks. Hagan and McKiernan kept busy.

However Inishowen were coming more into the game and O’Donnell cut out a dangerous corner. Midway through the half Inishowen got a free-kick on the edge of the box and curled the ball into the top corner of the net. Within a couple of minutes they were two up, breaking fast from midfield they scored.

Longford were now on the ropes but they responded when Jamie Fitzgerald went close. Maguire just ran out of ideas as he lined up a shot. O’Connor fired in an effort. But Inishowen held on and lifted the John Farrell cup.