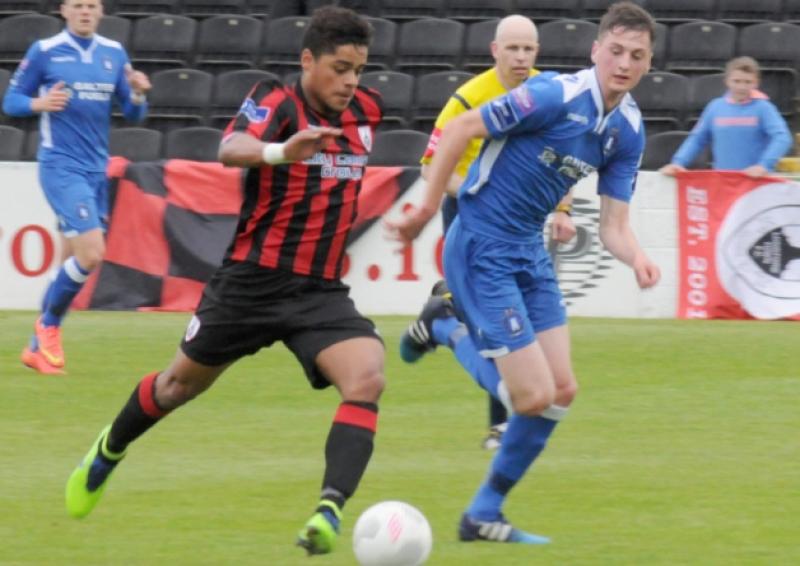 Airtricity League Premier Division: Longford Town 1 Limerick 0 Longford Town made very hard work of beating bottom club Limerick at City Calling Stadium on Saturday night last but all that matters is that they managed to collect three more vital points with Mark Salmon scoring the decisive only goal in the 25th minute of a scrappy encounter.

Longford Town made very hard work of beating bottom club Limerick at City Calling Stadium on Saturday night last but all that matters is that they managed to collect three more vital points with Mark Salmon scoring the decisive only goal in the 25th minute of a scrappy encounter.

This win pushes the Town back up to sixth in the Premier Division table, much to the satisfaction of the loyal home supporters among the 500 attendance, and the attention now switches to the FAI Cup second round tie against Finn Harps this Friday night.

The break from the league until the crucial away clash against Bray Wanderers at the Carlisle Grounds on Friday June 5th is welcome, taking into account that injuries ruled out Pat Flynn and Don Cowan against Limerick while another absentee was David O’Sullivan due to illness.

After picking up just one point from their previous three games against Derry City, Dundalk and Shamrock Rovers, the pressure was on Longford to get back on track over a struggling Limerick outfit who have failed to register a win in the top flight this season and are very much the prime contenders for automatic relegation.

But it was the visitors who made the early running at City Calling Stadium with the lone striker Dean Clarke having a shot blocked in the early stages while Sean Russell also had a chance in the 19th minute when Town defender Mark Rossiter cleared the danger.

Longford gradually awoke from their slumber and broke the deadlock in the 25th minute when the the ball fell kindly into the path of Mark Salmon who hit the target from close range.

Just before the break Gary Shaw had a header saved by the young Limerick keeper Tommy Holland and while the other Town striker Kaleem Simon (a constant threat up front) shot to the back of the net in stoppage time the goal was disallowed for offside.

The home side should have put the issue beyond all doubt in the opening minutes of the second half when impressive winger Ayman Ben Mohamed shot into the sidenetting after latching on to a delightful through ball from influential midfield general Kevin O’Connor.

Soon after the always dangerous Ben Mohamed was in the clear again but his goal attempt was saved by the Limerick netminder and Longford were almost caught napping in the 51st minute when former player Sean Russell shot narrowly wide.

The Town created another decent opportunity in the 67th minute when Gary Shaw directed a close range header off target after connecting with a cross from the excellent Kevin O’Connor but Limerick kept plugging away in the hope of getting something from the game.

Substitute Kieran Hanlon went close with a low drive that got a vital touch from Town keeper Paul Skinner in the 74th minute while Gary Shaw had a chance with a header in the 82nd minute but the danger was cleared.

Frustrated in that they were unable to finish the opposition off, Longford lived dangerously in the closing stages and after Paul Skinner dealt comfortably with a poor effort from Dean Clarke, Limerick almost snatched a dramatic last gasp equaliser in stoppage time.

A close range header from Paul O’Conor drifted just over the bar, much to the great relief of the Town fans who had watched their side struggle to assert their superiority in a poor game but the end result was the most important factor.