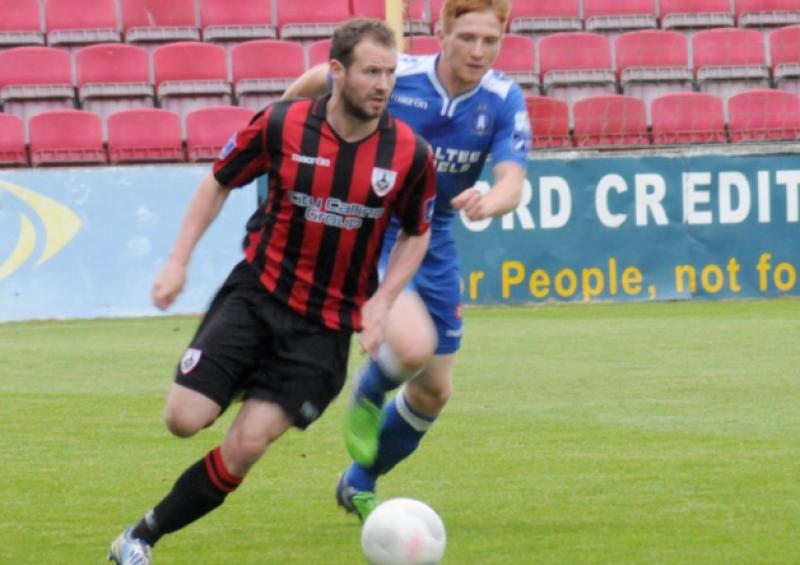 Harps, who are being managed by Ollie Horgan, are a very strong physical side who can play good football and that is one of the reasons that they are flying at the top of the table at the moment.

Over the years Harps have been one of the hardest teams to beat in the league and the clubs had some great battles in the First Division over recent seasons.

Last season the Town had a fine run of results against the Donegal side , winning three and drawing the other game. The first meeting between the clubs in mid April ended one nil to the Town, the only goal coming from the penalty spot from Davy O’Sullivan. The second meeting at Finn Park was played in mid June and this ended 1-0 also to the Town. The Town were awarded a free kick with five minutes remaining and left full Glen O’Connor scored a peach of a goal to give the Town three very valuable points.

The third meeting in early August ended scoreless while the final meeting between the clubs at Finn Park was won by the Town on a 2-0 scoreline. The goals that day came from Davy O’Sullivan and team captain Mark Salmon. The team travelled back to Longford after the game for a civic reception to honour the team for their success on winning the league title.

Last weekend Finn Harps consolidated their place on top of the First Division by drawing 2-2 with UCD at Finn Park.

Finn Harps are the only unbeaten team in the First Division as they have a record of eight wins and four draws with a goals record of 20 so far and 9 against.

Ruairi Keating, who was on loan from Sligo last season, is their leading scorer in the League to date with five goals while veteran striker Kevin McHugh is next with four to despite being on the bench occasionally.

This Harps team has many experienced players and starting with Ciaran Gallagher in goal they have one of the best stoppers in the game. The defence is a well organised one as the likes of Damien McNulty, Thomas McMonagle and Josh Mailey are players who could fit in well in the Premier Division. Michael Funston and Garrett Harkin are top midfielders and they also have Matthew Crossan and Raymond Foy in there to make up a formidable outfit.

Up front against UCD Ollie Horgan used Ruairi Keating and Wilfrid Tagbo but he also introduced Kevin McHugh and he scored the equaliser to gain a vital point on Friday last.

The Town got back to winning ways on Saturday night last when they had a well deserved 1-0win over Limerick at City Calling stadium.

Both managers had to make changes before kick off as Russell had to plan without regular keeper Conor O’Donnell and he had to give rookie 17 years old Tommy Holland a start and the young lad didn’t let his manager down.

It was worse news for Tony Cousins as he had to plan without three regulars who missed the game for different reasons. Pat Flynn, who had to go off against Shamrock Rovers the previous weekend, didn’t make it and his place in the centre of the defence was taken by Rhys Gorman who never put a foot wrong in the centre alongside Mark Rossiter.

Davy O’Sullivan, who scored the two goals against Limerick in Jackman Park earlier in the season, missed the game through illness and his place up front was filled by young Kaleem Simon who gave a great account of himself against the experienced O’Connor.

Don Cowan also missed the Limerick game through injury and we hope that he will make it back soon and that would give Tony Cousins a stronger hand to pick from.

Town captain Mark Salmon, who was playing out on the right side of midfield, was the Town hero on Saturday night when he scored the only goal on 25 minutes.

Let’s hope that the Town will embark on a good cup run on Friday night next. Since our first appearance in the Cup Final back in 2001 the Town have become one of the teams to beat in Cup football but we have had some disappointments along the way.

Now that we are in the top half of the table on our return to the Premier Division the supporters will be looking for a good cup run this season.

Finn Harps will be hard to beat but we have to win the game and push forward on two fronts.

The Town played Finn Harps in the 3rd round of the FAI Cup back in June 2011. The first game took place at Flancare Park and the game ended scoreless despite the Town dominating it for long periods. In this game the Town had to play without the services of Keith Gillespie, Thomas Hyland, Cathal Brady and Jacques Morley due to injury and keeper Paul Hunt was rested with Alvin Rouse playing in goal. For the replay in Finn Park, Thomas Hyland returned to the team at the expense of Aidan Roche who was on the bench. Like the first game this was very tight but Harps despite being minus leading scorer Kevin McHugh who saw red in the drawn game gave the Town a tough battle. It looked as if the game was going to extra time but eight minutes from full-time the Town were awarded a penalty as Packie Mailey fouled Lee Rode in the box. The penalty was taken by Mark Salmon but keeper Ciaran Gallagher saved it but Sammo following up and blasted the rebound to the net.

Don Cowan played in both games as did current team captain Mark Salmon. Keeper Ciaran Gallagher and striker Kevin McHugh were involved in the Cup games as was Packie Mailey who was on the bench last weekend against UCD at Finn Park.

Harps manager Horgan, who is a very shrewd individual, was in City Calling Stadium recently for the Derry City game and no doubt plotting the downfall of Tony Cousins and his Longford Town team in the FAI Cup.

Looking back at the bench for the Cup games against Harps in 2011 it was nice to note that Darren Carberry and Peter Szczerbowski, who also lives in Longford, were subs along with Niall O’Reilly, Daniel O’Reilly and Paul Hunt.

There is always a great buzz for Cup games and hopefully we will have a big crowd for Friday’s clash with Finn Harps.