No Joy for Longford Town 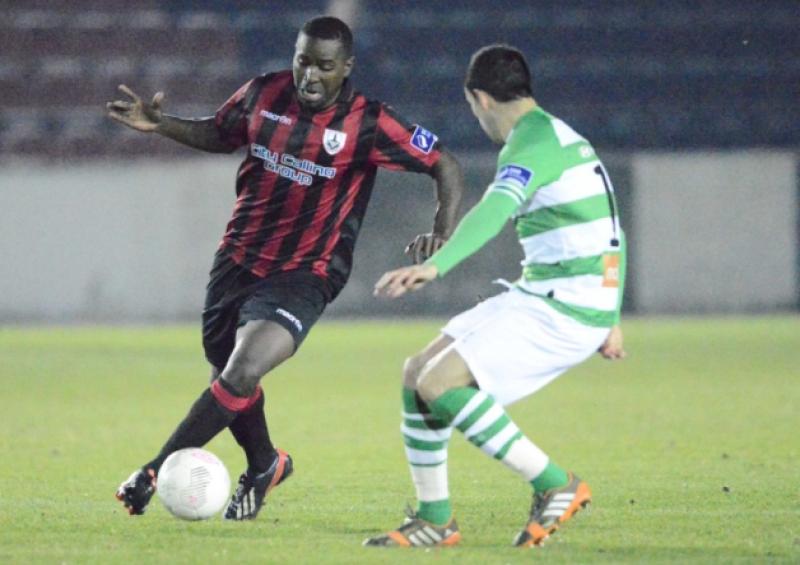 Longford Town got a clear indication as to just how tough things are going to be in the Premier Division this season when they suffered defeat against a superior Shamrock Rovers side at City Calling Stadium on Saturday night last.

Longford Town got a clear indication as to just how tough things are going to be in the Premier Division this season when they suffered defeat against a superior Shamrock Rovers side at City Calling Stadium on Saturday night last.

With former Republic of Ireland senior internationals Keith Fahey and Stephen McPhail operating in the centre of midfield, Rovers are packed full of quality players and their shrewd manager Pat Fenlon has assembled a very strong squad who must be serious contenders for the league title this season.

While it might have been a different story on Saturday night had Gary Shaw converted a glorious chance for Longford Town as early as the 2nd minute, Shamrock Rovers were generally in control and they broke the deadlock in the 24th minute.

Sean O’Connor let fly with a speculative long range strike that skipped past the outstretched arms of Town keeper Paul Hunt as the ball ended up in the corner of the net and the visitors inflicted further damage when they scored again in the 41st minute.

With Longford defender Pat Flynn failing to clear the danger, it was left to tricky winger Kieran Marty Waters to weave his way into the box on a penetrating run before shooting past Paul Hunt from close range.

That proved to be a killer blow from which the home side never really recovered and whatever chance they had of salvaging the situation was denied by Clare referee Padraig Sutton who turned down a strong claim for a penalty in the 29th minute.

Former Town keeper Craig Hyland stopped a free-kick from Mark Salmon but let the ball slip from his grasp and in a frantic attempt to recover from his mistake he got caught in a tangle with Gary Shaw who was poised to pounce for a possible equaliser.

Although Shaw was brought down in this controversial incident, the match official waved play on - much to the anger of the Longford supporters who comprised the bulk of the attendance of just over 2,000.

But few can argue with the fact that Shamrock Rovers deserved to collect all three points and the Town must now focus on their next league fixture away to Limerick at Jackman Park on Saturday evening, followed by a crucial home game against Bray Wanderers on Tuesday night next.

After that it’s a trip to Galway on Friday March 27th and it is the direct results against these three teams that will determine the destiny of Longford Town in their quest to consolidate their Premier Division status. Getting anything from the most difficult opening fixtures against Dundalk and Shamrock Rovers was always going to be a tall order but the midlanders showed enough in those defeats to suggest that they are good enough to stay up and will hopefully avoid the pressure of a relegation battle.

Minus defender Pat Sullivan who got married on Saturday, the Town manager Tony Cousins decided not to start with a more attack minded 4-4-2 formation against such quality opposition, opting instead to play Mark Salmon in front of the back four; Gary Shaw out on the right side of midfield with David O’Sullivan operating the lone striker role.

And there was almost a dream start for Longford Town with David O’Sullivan putting Gary Shaw through in the 2nd minute but he was denied by Rovers keeper Craig Hyland who made a crucial close range save and the danger was eventually cleared by defender David Webster.

There were half chances for both sides thereafter with Longford’s news signing Martin Deady shooting over the bar and then Town keeper Paul Hunt came to the rescue when he produced a fine point-blank save to prevent Rovers striker Danny North from scoring in the 21st minute.

Moments later Kevin O’Connor, displaying great control, went close for the home side with a dipping shot that dropped just over the bar and then came the cracking opening goal from Sean O’Connor.

Rovers went close again in the 31st minute when North shot over the bar and their second goal eventually materialised courtesy of some great skill from Waters before the break.

Cousins, now left with no choice but to switch to a 4-4-2 formation with Shaw moving up front to partner O’Sullivan, brought on Don Cowan (back after injury) at the start of the second half and he certainly improved matters for Longford Town in the face of adversity.

Cowan produced a few dangerous raids down the right wing that unfortunately came to nothing as Rovers kept it very tight in the centre of defence, although there was a couple of anxious moments for them in goalmouth scrambles.

The Town won a number of corners which proved fruitless in their bid to score a badly needed goal and Shamrock Rovers were always so dangerous on the counter attack and twice went close to scoring a third goal.

Kevin O’Connor played a delightful ball into the path of O’Sullivan but he blasted his rushed shot wide of the target in the 79th minute and Shamrock Rovers, after this scare, settled back into the comfort zone from there until the final whistle.