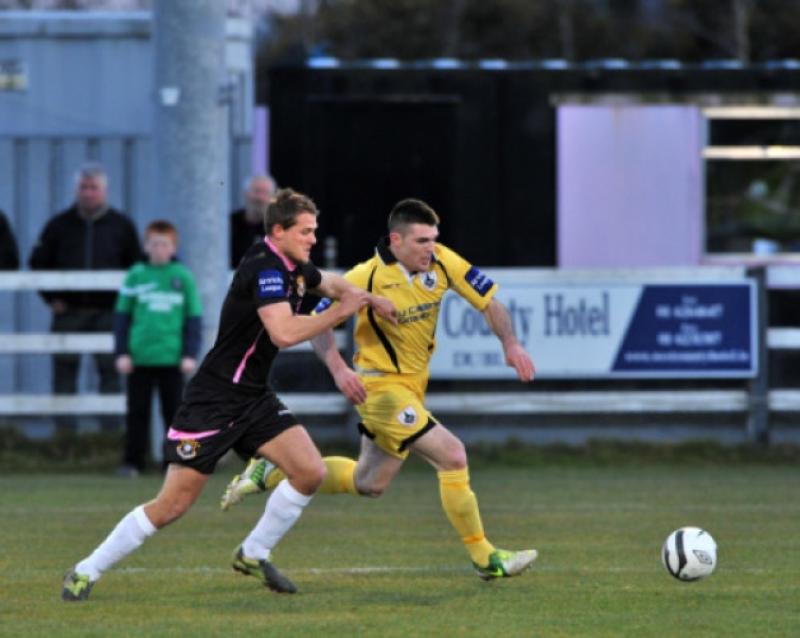 Playing with 10 men for nearly an hour, Longford Town battled hard to claim a crucial victory away to Wexford Youths at Ferrycarrig Park on Friday night last. This win coupled with other results over the weekend saw the Town extend their lead at the top of the First Division table to four points.

David O’Sullivan was yet again the matchwinner for the Town who lost Keith Gillespie in the 36th minute when he was shown a straight red card by Waterford referee Andrew Mullally. Gillespie reacted angrily after he was on the receiving end of a rash challenge from Thomas Croke. The former Northern Ireland International seems to be a target for a lot of teams.

The officiating throughout the game was extremely poor, to say the least. After below par performances in a few of their games this season, the Town showed great character to come away with the win. They fought hard in the second half and got their just rewards in the end.

With Noel Haverty back from injury, he came straight into the team at right-full with Chris Deans, who had been playing in that position, dropping to the bench. That was the only change from the side that drew 1-1 with Mervue United in their previous game.

The Town had the better of the opening exchanges; Mark Salmon hit his effort just wide in the 9th minute while Daniel Purdy had a chance but headed straight at the Wexford keeper Graham Doyle.

Wexford had two frees in quick succession after that but failed to trouble the Town. A mistake from Town keeper Chris Bennion in the 24th minute very nearly proved costly but lucky for him Joey Mulcahy blasted his effort over the bar.

In the 34th minute the Town came close to open the scoring but Gillespie brought a great save out of Doyle. Two minutes later disaster struck for the player and the Town when he was sent-off after an incident with Croke. Longford had to change their formation and Gary Shaw dropped back to midfield with O’Sullivan playing the lone striker role; and he really put in a fantastic shift.

Wexford then had two chances just before the break. First Shane Corcoran’s shot was blocked then right on the stroke of half-time Caolan O’Gorman dragged his shot wide. The home side started the second half like they had ended the first and created their first chance in the 54th minute; Aidan Keenan with a neat effort that just went wide.

In the 56th minute Wexford were to rue not putting away the chances they created. A throw-in from Willie Tyrell found the feet of O’Sullivan who took on two Wexford defenders with one thing on his mind – finding the back of the net. And he did just that to grab his 7th goal in six games. He really is a find for the Town this season.

Just after that he had a chance to double his advantage but his effort hit the post. The lively Etanda Nkololo was unlucky not to grab his first goal for the club in the 71st minute but his effort was cleared off the line. Seven minutes later O’Sullivan’s shot sailed just inches over the bar.

In the final 10 minutes Wexford tried to make their numerical advantage count as they went in search of an equaliser but Town’s defence stood firm and they were resilient as the home side piled on the pressure. The centre-half pairing of Willo McDonagh and Brian McCarthy were immense in those final minutes.

In the 82nd minute Wexford had their best chance to draw level but Bennion brought off an excellent save to deny Aidan Keenan. Try as they might Wexford just couldn’t find a way past McDonagh and McCarthy and the Town held on for a deserved win.

This win sets them up nicely for the first league meeting with neighbouring rivals Athlone Town at City Calling Stadium on Saturday night next. Form goes out the window in derby games but the vital win over Wexford will give the players the lift they need ahead of the meeting with the Roddy Collins managed opposition.