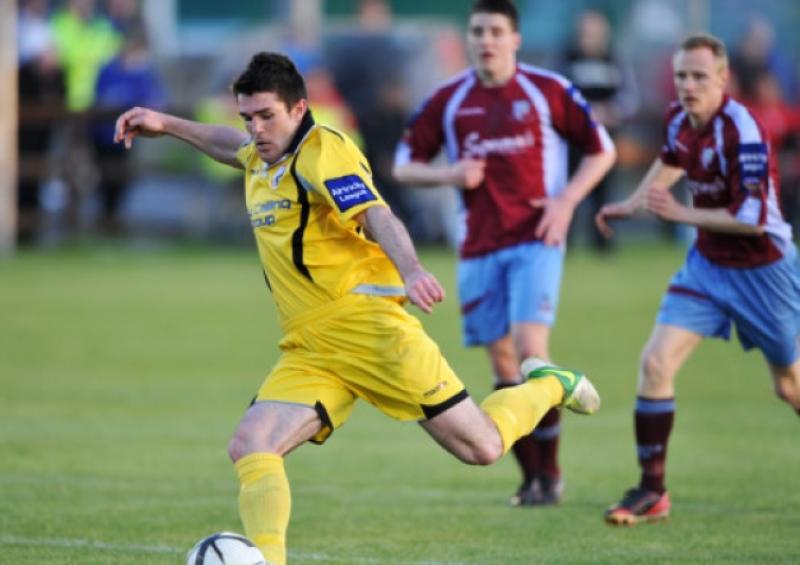 Ten man Longford Town came from behind to beat Mervue United at Fahy’s Field on Friday evening last and this vital victory, coupled with other results, saw the midlanders extend their lead at the top of the First Division table to seven points which puts them in a strong position to claim the title and the automatic promotion place.

The Town have developed a great habit of grinding out results this season; something they couldn’t achieve over the last number of years. In striker David O’Sullivan they also have a matchwinner. The Wicklow man’s aim at the start of the season was 15 league goals. With 12 games gone he has scored 12 and he truly has been terrific.

O’Sullivan is modest and won’t take all the plaudits and rightly so because there are other good players around him. In recent games Keith Quinn has stepped up to the mark, so too Willie Tyrell and also O’Sullivan’s strike partner Gary Shaw - to name a few – and Shaw was extremely unlucky not to score on Friday night.

Trailing to a Paul Sinnott goal just before the break things didn’t look too good for the Town when defender Willo McDonagh was shown a straight red card for an apparent elbow in the 54th minute but instead of going for a second goal Mervue got very defensive and this suited the Town. Manager Tony Cousins brought on David O’Neill and Gavin Doyle and the two substitutes made a huge difference with O’Neill scoring the winner in the 76th minute - his first goal for the Town.

Longford started the game brightly and created a chance inside the first minute with O’Sullivan forcing Mervue keeper Conor Gleeson into making a save. Six minutes later and Shaw came close to opening the scoring when he met Daniel Purdy’s cross but his effort went narrowly wide.

One minute later and the home side created their first chance; Jason Molloy’s cross met the head of striker Brendan Lavelle but his attempt just went over. Shaw had another chance for the Town in the 16th minute but again he failed to find the target.

Town keeper Chris Bennion was forced into making an excellent save in the 20th minute to keep his goal intact when Jason Molloy cut inside and struck a powerful shot. In the 30th minute the visitors thought they had broken the deadlock but Brian McCarthy’s goal was ruled out for offside.

Down the other end the home side looked dangerous going forward and created another good chance in the 31st minute; Ryan Manning put Lavelle through on goal but Bennion produced another great save to deny the Mervue striker.

Gary Shaw blasted his shot over the bar in the 42nd minute when he really should have done better and then two minutes later some sloppy defending proved costly for Town when a poor clearance fell to Sinnott and he made no mistake in finding the bottom corner of the net.

The second half was only nine minutes old when Longford were reduced to ten men after Willo McDonagh received a red card. Minutes later Mervue created a decent chance; Lavelle put a cross into the box but unfortunately for the Galway side there was no one there to turn the ball into the net.

Mervue then sat back a little and invited Town onto them. Sensing they could get something out of the game Longford made changes that turned the game very much in their favour. In the 70th minute Shaw did well to head the ball down for Purdy to have a strike but it just went over.

Three minutes later they were back on level terms when Keith Quinn played a nice ball into David O’Sullivan and he showed his goalscoring prowess by finding the back of the net from the edge of the box. Minutes later Town took the lead when O’Sullivan’s former Wayside Celtic team-mate David O’Neill scored with a looping header.

Mervue were stunned and could not engineer a late equaliser. In the 86th minute Marc Ludden should have done better with his effort and deep into stoppage time O’Sullivan had a chance to grab his second goal in a promising Town attack but he curled his effort wide.