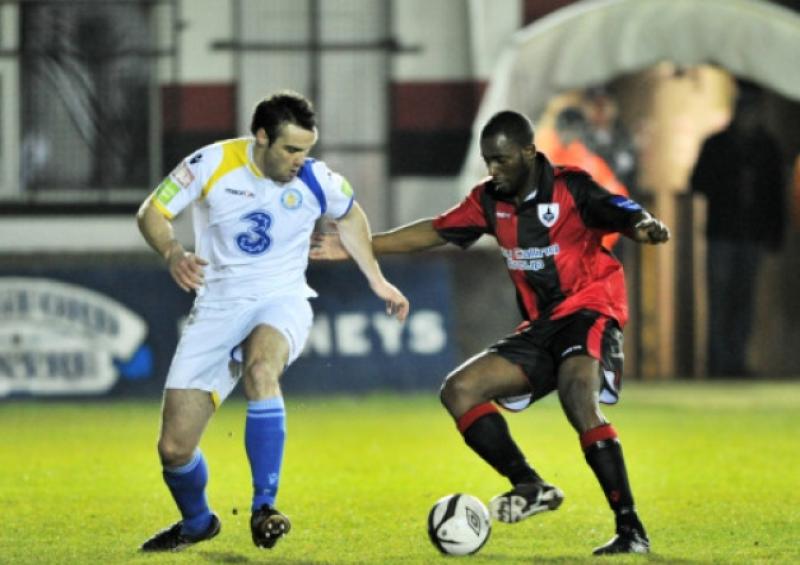 Goals from Michael Isichei and David O’Sullivan in a 10 minute spell earned Longford Town their second league win of the season in front of a small attendance at City Calling Stadium on Saturday night last.

After falling behind in the 13th minute, Isichei got the Town back into the game in the 36th minute with his first goal for the club. O’Sullivan then followed up his hat-trick against Salthill the previous week with a goal that turned out to be the winner and he is really proving how important he is going to be for Longford this season.

That’s two wins from two league fixtures and Tony Cousins side are top of the First Division table. However, their chances of winning the league title this season face a serious test on Saturday night next when they travel to Ballybofey to take on Finn Harps; another side who have aspirations of getting promoted.

Waterford, the pre-season favourites for automatic promotion, started last Saturday’s game well and in the 3rd minute Chris Bennion had to be alert to race out of his goals to clear the danger before Paul Quilty could get to the ball.

Three minutes later Ben Ryan went close to breaking the deadlock for the visitors after pouncing on a poor clearance from Town defender Brian McCarthy with Ryan unleashing a shot which came off the crossbar.

It was all Waterford in the opening stages and it was no surprise when they scored in the 13th minute; Paudie Quinn picked up the ball and cut inside before curling his shot superbly past Bennion and the Town keeper had no chance.

Longford just couldn’t get into their stride and in the 23rd minute they lost Corie Treacy to injury and he was replaced by Noel Haverty. Despite their early dominance Waterford sat back a little and invited Town onto them and this proved costly.

In the 36th minute Longford levelled matters with their first real chance on goal; David O’Sullivan played the ball to Michael Isichei who went through to shoot a low drive past former Town keeper Craig Hyland, now the Waterford netminder.

The Town were boosted by the goal and went in search of a second. First Etanda Nkololo’s shot was saved by Hyland and then seconds later Isichei’s effort was deflected out for a corner.

But Waterford had players who could cause problems and on the break Quilty had a chance but his effort was saved by Bennion while in a Longford counter-attack Keith Gillespie blasted his effort over the bar. In first half stoppage time Town took the lead and it proved to be the winning goal; Willie Tyrell got his head to a corner and O’Sullivan got the vital flick on the ball to head past Hyland for his fourth goal in two league games.

The Town started the second half well and Hyland was called into action in the 53rd minute in pulling off a fine double save; Mark Salmon’s shot which lacked power was saved by the Waterford keeper and the ball broke to O’Sullivan whose strike was excellently tipped over the crossbar by Hyland.

Waterford had half chances in the space of three minutes but Paul Quilty and Gavin Kavanagh failed to trouble Town keeper Bennion. Then Paudie Quinn’s header in the 68th minute lacked power and Bennion was able to save.

Quinn created another chance that brought a routine save out of Bennion. The Town had other chances with David O’Sullivan unable to get the accuracy on his shot in the 73rd minute and three minutes later substitute David O’Neill should have done better with his effort.

Waterford pressed hard for an equaliser with Vinny Sullivan testing Bennion with a snapshot while Town centre-half Brian McCarthy did well to cut out a dangerous cross from Peter Higgins in the 84th minute. But with Waterford pushing forward, it left them vulnerable at the back and in the 90th minute Craig Hyland was forced into making a good save with his feet to deny Nkololo a third goal for Longford Town.

Two minutes into additional time Waterford were awarded a free-kick in a dangerous position after Tyrell had fouled Higgins but Ben Ryan’s strike was cleared by the Town who held on to collect all three vital points.