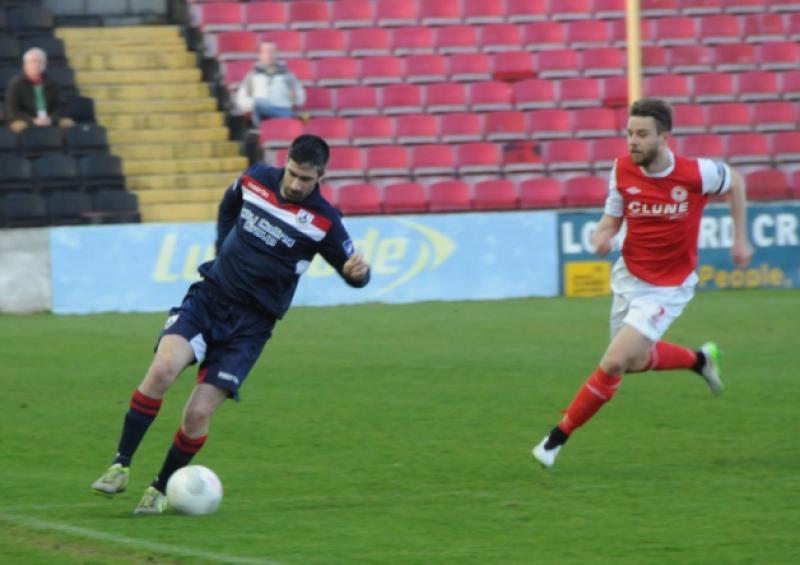 While Longford Town succeeded in extending their unbeaten run in the Premier Division to four games, they blew a glorious opportunity of scoring a surprise win over St Patrick’s Athletic in a cracking contest at City Calling Stadium on Saturday night last with Ayman Ben Mohamed hitting the crossbar deep into stoppage time.

While Longford Town succeeded in extending their unbeaten run in the Premier Division to four games, they blew a glorious opportunity of scoring a surprise win over St Patrick’s Athletic in a cracking contest at City Calling Stadium on Saturday night last with Ayman Ben Mohamed hitting the crossbar deep into stoppage time.

The official attendance of 1,024 watched the home side make a stunning start with early goals from Kevin O’Connor (a spectacular long range strike in the 7th minute) and Mark Salmon (converting a penalty in the 16th minute), only to let the lead slip as St Pat’s battle back to snatch a draw.

Chris Forrester scored a classy goal in the 22nd minute, showing great skill to lift the ball over advancing Town keeper Paul Hunt to find the back of the net, but the Dublin club then suffered a significant setback when defender Ian Birmingham was sent-off after receiving a second yellow card.

Birmingham was initially booked for bringing down Don Cowan in the box for the penalty and with St Pat’s now reduced to ten men, the game was there for the taking but Longford Town unfortunately failed to capitalise on the numerical advantage - much to the dismay of manager Tony Cousins.

David O’Sullivan squandered a clear-cut chance of scoring a third goal for the midlanders in the 35th minute when he directed a free header wide from close range after connecting with a perfect cross from Cowan and O’Sullivan was guilty of another costly miss in the 55th minute when he shot straight at the opposing keeper Conor O’Malley.

It proved to be a very frustrating game for the normally so prolific O’Sullivan, who was through again in the 61st minute but he was denied by O’Malley who produced a fine point-blank save to keep his side in contention.

Even with the ten men, St Pat’s were always dangerous on the break and dominated the early stages of the second half in the quest for the equaliser with decent chances falling to Sean Hoare, Kenny Browne and the impressive Christy Fagan who had a couple of shots saved by Longford keeper Paul Hunt.

With the Town unable to land the killer blow, it was left to quality striker Fagan to create another chance for a second St Pat’s goal and it duly materialised in the 66th minute.

Fagan fired over a cross that found the head of Conan Byrne, who hit the target from a few yards out, and soon after there was a let-off for Longford when Fagan had a goal disallowed for offside.

St Pat’s continued to surge forward in search of a winner and after a Forrester shot deflected off Fagan in going over the bar, James Chambers (such an influential figure in the centre of midfield) got in behind the Longford defence but his close range effort narrowly failed to find the target in the 79th minute.

Paul Hunt then came to the rescue when he made a brave save at the feet of Forrester who was poised to shoot and possibly score but when St Pat’s manager Liam Buckley then brought off Christy Fagan the visitors were apparently settling for a share of the spoils.

Despite losing Don Cowan, who was stretchered off injured in the 83rd minute, Longford Town went on to produce a strong finish that almost yielded a winner in this action-packed encounter that was a great advertisement for the League of Ireland.

First Pat O’Sullivan drove a free-kick over the bar in the 90th minute and then substitute Kaleem Simon was in a great position to score but his shot was blocked and deflected wide of the target.

As the match drifted into the fourth minute of stoppage time, there was almost a dramatic last gasp winning goal for the Town when another replacement Ayman Ben Mohamed was denied by the crossbar after letting fly with a terrific strike from outside the box.

But at least Longford got a point to keep the momentum going for the next league game against Bohemians at Dalymount Park this Friday night and on current form will be confident of getting another result.