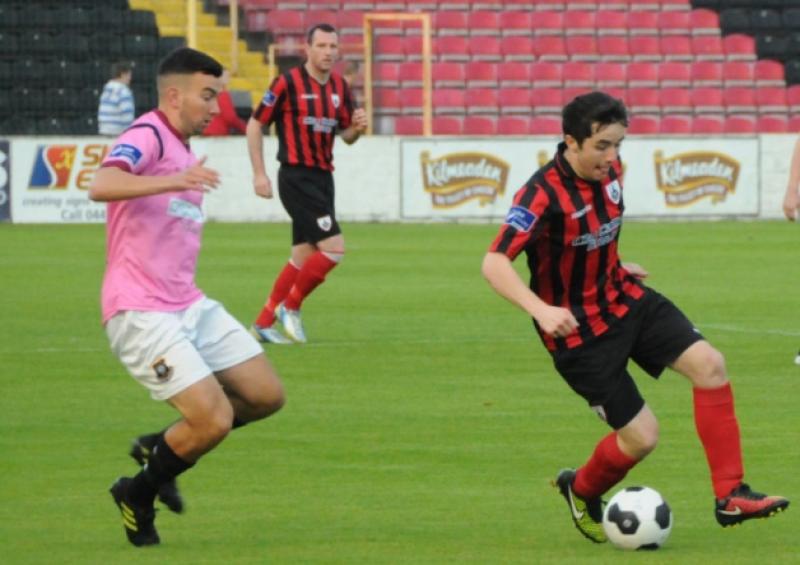 The final score may suggest that Longford Town dropped two points in the battle for the First Division league title but in truth it was a point gained in a game that was marred by controversial refereeing decisions at City Calling Stadium on Saturday night last.

The final score may suggest that Longford Town dropped two points in the battle for the First Division league title but in truth it was a point gained in a game that was marred by controversial refereeing decisions at City Calling Stadium on Saturday night last.

Three terrible decisions that went against the Town had a huge bearing on the eventual outcome but there were many more throughout from Waterford referee Andrew Mullally. Even the most placid of Longford supporters vented their anger at the final whistle.

The decisions in question were the two penalties which Danny Furlong scored in either half along with the dismissal of Town defender Pat Sullivan who was sent-off in the closing minutes of the game.

Longford started well and took the lead in the 4th minute; a pinpoint cross from Lorcan Shannon was powerfully headed home by Gary Shaw. The closest Wexford came was in the 29th minute but a Dean Broaders header from a Peter Higgins cross just went inches wide. Two minutes later Shannon’s effort was deflected out for a corner.

In the 37th minute Stephen Rice was adjudged to have taken down Higgins. It was debatable whether there was any contact for what looked like a dive and if so it was outside the box. Furlong stepped up and scored the penalty to level matters.

The Town were the better team in the second half and Pat Flynn’s header was off target in the 57th minute while minutes later David O’Sullivan’s low drive was parried by Wexford keeper Graham Doyle.

It was all Longford at this stage and in the 73rd minute Rice’s powerful shot was touched out for a corner by Doyle. Against the run of play, Wexford had a shot that came off Pat Sullivan but to the amazement of the attendance (in the region of 500), the referee pointed to the spot for handball and Furlong dispatched the penalty to the net to put the visitors ahead in the 79th minute.

The Town were stunned by this setback but in the 85th minute they got the equaliser through a terrific header from Gary Shaw. They then went in search of a winner but were dealt a bad blow in the 89th minute when Sullivan was sent off when clearly he was the one fouled by Furlong.

And so a very frustrated Town team had to settle for a draw in a game that was destroyed by poor officiating and they cannot afford to drop any more points in the remaining four fixtures in the quest for automatic promotion to the Premier Division.