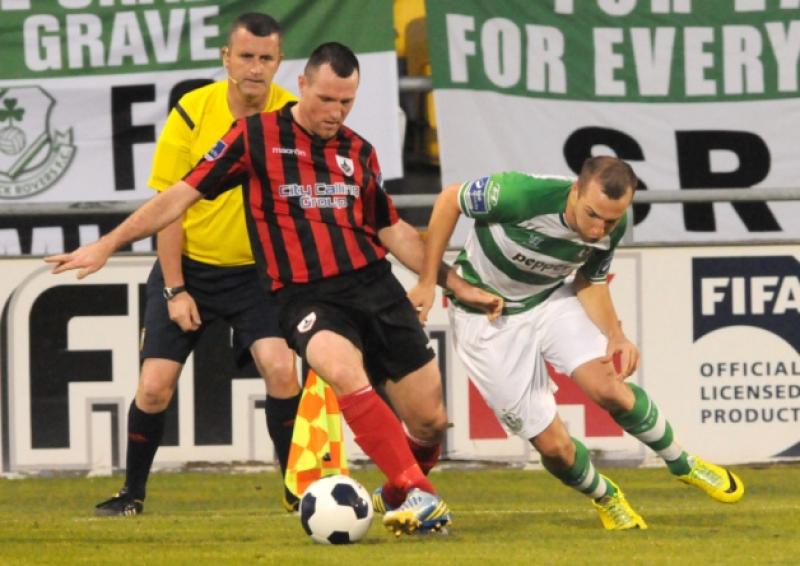 The scoreline may suggest it was an easy win for Shamrock Rovers in the FAI Cup third round clash but in truth Longford Town dominated large periods of the game at Tallaght Stadium on Friday night last.

The scoreline may suggest it was an easy win for Shamrock Rovers in the FAI Cup third round clash but in truth Longford Town dominated large periods of the game at Tallaght Stadium on Friday night last.

The Town created chances but just couldn’t put them away while two mistakes led to Rovers first two goals and they grabbed their third on the counter attack.

Although disappointed with the defeat, Longford Town manager Tony Cousins was proud of his team’s performance. “We played really well. I said before the game that we didn’t want to come here and make a tame exit from the Cup but the lads put in a strong performance. But it does show you at this level that you can’t afford to make mistakes. Some of the football that we did play was good and I am really proud of the boys, particularly the character that they showed in the second half.”

The main thing for the Town was to put in good performance and not to pick up any injuries with a huge league game away to Shelbourne to come on Friday night. Cousins wants more of the same at Tolka Park.

“If you keep playing well, things do fall for you. I was pleased the way the players applied themselves against Rovers. We are looking forward to the Shels game now and we know what we have to do on Friday. We are in a good position so let’s push on in the bid to win the title and promotion.”

Longford Town started the FAI Cup game brightly against Shamrock Rovers and their first chance came in the 6th minute when David O’Sullivan dragged his shot just inches wide. In the 14th minute Kevin O’Connor’s dipping shot went over the bar while in the 19th minute O’Sullivan had another chance but it didn’t trouble opposing keeper Barry Murphy.

Soon after Gary Shaw did very well to win the ball and passed to O’Sullivan, who took too much time to take a shot and Murphy was able to save. That miss proved costly because Rovers broke the deadlock in the 25th minute. Sean O’Connor picked up a loose Town pass and a neat move involving Dean Kelly and Karl Shepherd ended up with O’Connor finishing to ball to the net.

It was the home side’s first effort on goal and 11 minutes later they doubled their advantage in punishing some poor Town defending; Gary McCabe letting fly with a fantastic strike that was unstoppable.

Rovers were now in control and they finished the first half strongly with Town keeper Paul Hunt denying both Kelly and McCabe.

The Town started the second half well and in the 59th minute Don Cowan broke through but his shot was cleared by the Rovers defence. Kevin O’Connor also had an effort minutes later that went wide.

Rovers had a good chance to get another goal in the 68th minute but it was wasted by Shepherd. The game then fizzled out but in the final 10 minutes the Town pushed for a goal; Pat Sullivan’s low strike was saved by Rovers keeper Murphy in the 83rd minute before goalscorer Sean O’Connor was sent off for a second yellow card offence.

Town defender Pat Flynn shot wide from a Pat Sullivan corner in the 86th minute and four minutes later Rovers got a third goal through new signing Patrick Cregg. Right at the end, Longford thought they had grabbed a consolation goal but O’Sullivan’s effort was ruled out for offside.

The Town now turn their attentions to Friday’s crucial league game and Tony Cousins has urged the Longford supporters to come to Tolka Park. “If we can succeed in winning the First Division title then it’s going to be tremendous for everybody at the club and all will have played their part. So we need all the support we can get from here on in. We all have to stick together now in the quest for promotion.”