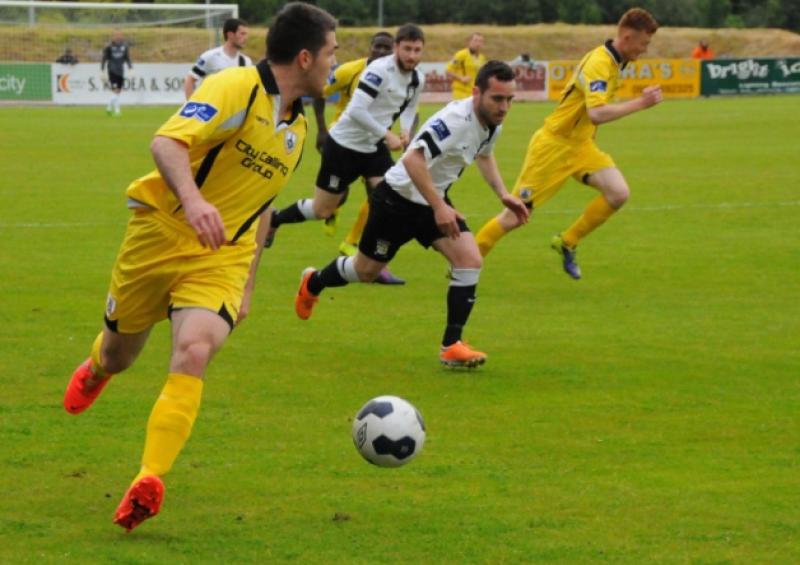 A superbly struck free-kick from Glen O’Connor five minutes from time gave Longford Town a dramatic win in the Airtricity League First Division away to Finn Harps on Friday night.

A superbly struck free-kick from Glen O’Connor five minutes from time gave Longford Town a dramatic win in the Airtricity League First Division away to Finn Harps on Friday night.

O’Connor’s late winner in Ballybofey means the Town go into the mid-season break level on points with second place Galway and just two behind leaders Shelbourne, and they have a game in hand. The first game back for Town after the break is a trip to Eamon Deacy Park to take on Galway.

Although they didn’t create too many chances compared to previous games it was looking like the Town would have to settle for a share of the spoils and leave frustrated. But in the 85th minute they were awarded a free-kick for a foul on Stephen Rice and up stepped O’Connor to fire the ball into the top right hand corner of the net.

It was a poor game throughout with the Town deserving their win against a Harps side who rarely threatened and struggled to create much of note.

Harps first chance came in the 25th minute; Josh Mailey played the ball into Ruairi Keating, who got in between two Town defenders before going to ground. Nothing in the way of protests by the home side as a corner was awarded.

O’Sullivan had another chance for Longford in the 32nd minute but his header from a Don Cowan cross went wide. The striker came close again one minute later but his shot just went over.

After failing to trouble the Town defence in the first half the home side were the happier of the two teams as they went in at the break on level terms.

As the game went on and neither side really carving out too many opportunities it looked like ending in a scoreless draw. The Town for their part tried to create chances but the home side were content in sitting back and soaking up the pressure.

Five minutes from time the Town were awarded a free-kick in a dangerous position. Up stepped Glen O’Connor and his brilliantly struck shot beat Winn in the Harps goal.

There was nothing of note in the final few minutes as the Town held on for an important win and go into the mid-season break in a good position in the league. It makes for a most interesting second half of the season.