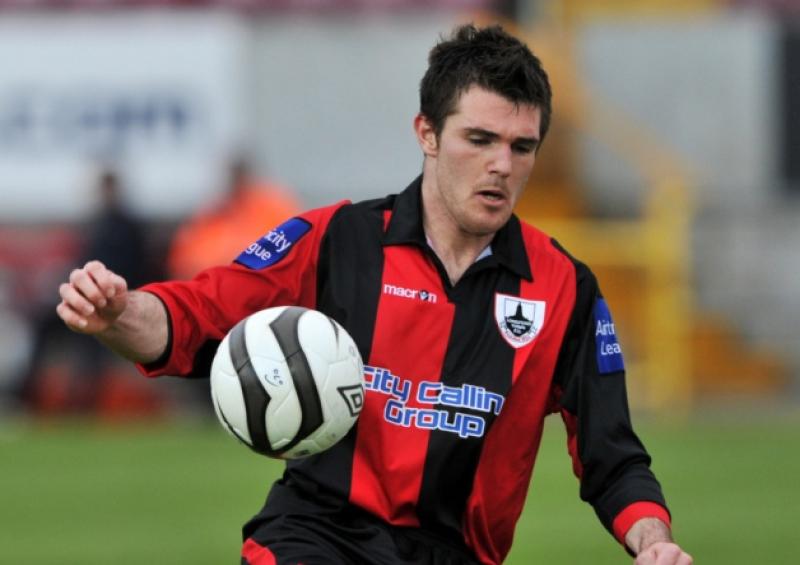 Longford Town moved back into second spot in the First Division table with their biggest win of the season over a depleted Cobh Ramblers at City Calling Stadium on Saturday night last.

Longford Town moved back into second spot in the First Division table with their biggest win of the season over a depleted Cobh Ramblers at City Calling Stadium on Saturday night last.

Whenever these sides meet there is always a guarantee there will be lots of goals. In their previous three meetings this season 20 goals were scored. Nine were scored on Saturday; seven of those by the Town and it improves their goal difference over Waterford in the table.

Both sides had a few half chances before the goal rush began with three in three minutes. Rhys Gorman opened the scoring for the Town in the 14th minute, connecting with a David O’Sullivan pass. One minute later and Cobh were on level terms; Ronan Stanton with the finish. The Town took the lead again in the 16th minute when Gorman found the back of the net after a fine ball in from Ryan Connolly.

Robert Waters levelled matters again in the 20th minute before David O’Sullivan got a third goal for the home side in the 27th minute, heading home a Connolly corner. But disaster then struck for the Town minutes later when young defender Jamie Mulhall was stretchered off after a nasty two footed tackle inflicted by a Cobh defender who only received a yellow card.

The second half belonged to Longford and they played some lovely football in the process of crushing poor Cobh with both wingers involved in a lot of the action. Josh O’Hanlon found the back of the net in the 59th minute and the scoring continued in the 64th minute when David O’Sullivan got his second goal to put the issue beyond all doubt - Gorman providing the pass for the lethal striker to hit the target.

In the 72nd minute Daniel Purdy got on the scoresheet, finding the back of the net from outside the box, and eight minutes later Ryan Connolly completed the demolition job with a neat finish. The Town ended the game with 10 men after Keith Quinn received a second yellow card.

It was a great performance and result for the Town ahead of a tricky game away to Mervue United on Friday night with the Galway club hoping to maybe sneak into the play-off spots with just three games remaining.