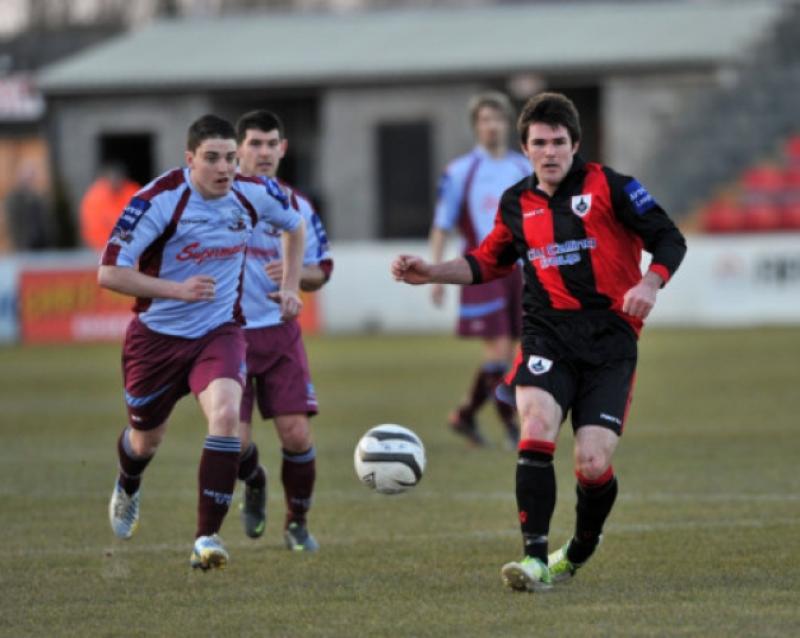 It is becoming a bit of a habit now; Longford Town leaving it late to get results with striker David O’Sullivan the main man yet again. On Friday night last O’Sullivan scored his 10th goal in 9 games as Town came from behind to claim a point down in the RSC. The goal came in the 88th minute after Longford had dominated the second half of this crucial First Division clash.

It is becoming a bit of a habit now; Longford Town leaving it late to get results with striker David O’Sullivan the main man yet again. On Friday night last O’Sullivan scored his 10th goal in 9 games as Town came from behind to claim a point down in the RSC. The goal came in the 88th minute after Longford had dominated the second half of this crucial First Division clash.

Last season in the RSC goalkeeper Craig Hyland was the hero for Town, this season he put in another heroic performance but in the Waterford United colours. The netminder made a string of great saves to deny the Town but was eventually beaten in the closing minutes when the Waterford defence failed to clear Keith Gillespie’s free.

In the end a draw was a fair result with it being the proverbial game of two halves; Waterford the better side in the first half and went in at the break 1-0 up thanks to Michael Coady’s goal in the 15th minute but the Town got the goal they deserved two minutes from time to come away with a vital point to maintain their strong position at the top of the table.

Despite Keith Gillespie returning from a two-match suspension, Town manager Tony Cousins kept faith with the side that started against Salthill Devon in the previous game. There was nothing to report in the opening quarter of the game as neither side created anything of note but that changed in the 15th minute as the home side opened the scoring; Darragh Walshe and Paudie Quinn combined well to set up Coady and his superb strike gave Town keeper Chris Bennion no chance.

Bennion did very well seven minutes later to deny Waterford the chance to double their advantage; Peter Higgins found Walshe but his header was brilliantly saved by the Town netminder.

Waterford were dominant and Walshe came close again in the 26th minute. As the half hour mark approached Town started to come into the game and created a good opportunity in the 31st minute when Keith Quinn’s corner from the left was excellently saved by Hyland.

Town keeper Bennion produced another great save in the 41st minute to deny Walshe again; Higgins perfect pass found the striker but the Town keeper dived full length to tip the effort around the post. Three minutes later and a wrong decision nearly proved costly for the Town; Mark Salmon clearly won the ball in a challenge with Paudie Quinn but the referee gave a free-kick against the Town captain. Quinn’s strike came crashing off the butt of the post with Bennion beaten.

Longford were a different proposition on the changeover. Three minutes into the second half Waterford keeper Hyland pulled off a superb save to keep his net intact; David O’Sullivan got on to the end of a long kick-out from Bennion but his chip was somehow tipped onto the post by the Waterford keeper.

In the 53rd minute the crossbar came to Waterford’s rescue when Noel Haverty’s overhead kick came crashing off the bar. Six minutes later and Hyland again denied the Town, this time tipping Keith Quinn’s free-kick over the bar for a corner.

As the game entered the final three minutes it looked like Waterford had weathered the storm and were going to hang on for a very important three points but Town have proven lately that they never know when they are beaten.

Two minute from time the home defence failed to clear Keith Gillespie’s free-kick and who was lurking in the box only the goal machine O’Sullivan and he made no mistake in firing home the equaliser.

With the league being small and competitive the big games are coming thick and fast and the Town welcome Finn Harps to City Calling Stadium on Saturday next.

The Donegal side have promotion aspirations this season and are the only side to beat Longford so far this season. They also won on both occasions in Longford last season but the Town will be boosted by the result in Waterford and will hope to extend their lead further at the top of the First Division table.