Longford Town slip up in draw against Salthill 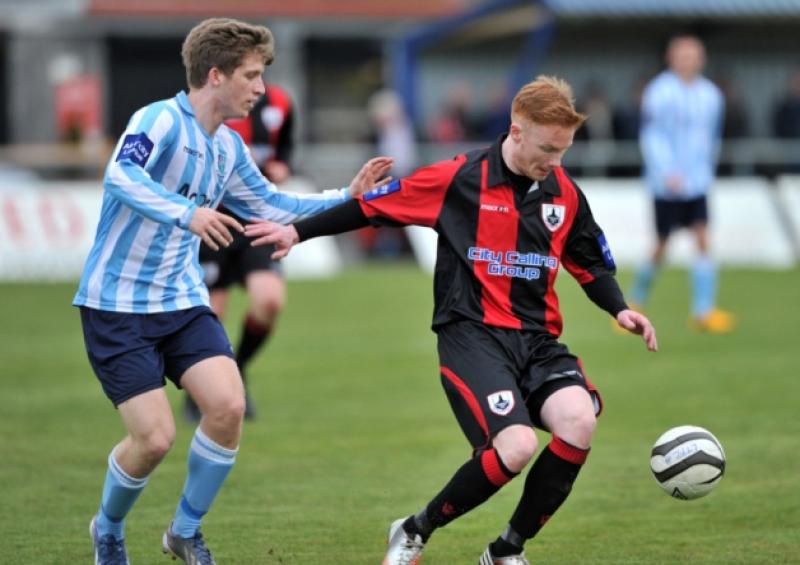 Longford Town dropped two vital points in their push for promotion when a penalty from Derek O’Brien with virtually the last kick of the game saw bottom side Salthill Devon earn a dramatic draw against the league leaders at the Drom grounds on Friday evening last.

Longford Town dropped two vital points in their push for promotion when a penalty from Derek O’Brien with virtually the last kick of the game saw bottom side Salthill Devon earn a dramatic draw against the league leaders at the Drom grounds on Friday evening last.

Into the fourth minute of stoppage time allotted at the end of the second half, Town substitute Rhys Gorman brought down O’Brien in the box and referee Sean Grant pointed to the spot straight away and O’Brien coolly dispatched the spot-kick past opposing keeper Chris Bennion.

It was a controversial decision because just seconds before that Bennion had received an elbow to the face but instead of penalising the offending player the referee booked the Town netminder for complaining. Play continued with a Salthill corner and from that the penalty was awarded.

Earlier this season Wexford official Grant turned down two blatant penalties for Longford against Finn Harps and failed to send off a Harps player and now this. On Friday last he was quick to penalise Town players with a few getting booked while Corie Treacy was sent-off in the 58th minute after receiving a second yellow card.

In a drab first half Salthill were the better side while Longford had half chances in the early exchanges with Josh O’Hanlon and Keith Quinn both failing to find the target.

In the 26th minute Mixie Harty forced Bennion into making a fine save and then in the 33rd minute the Town netminder pulled off a good save with his feet to deny Graham Kelly.

Longford improved in the second half and in the 51st minute Keith Quinn was unlucky not to score but his low drive went wide but then minutes later disaster struck when Treacy was sent-off.

Down to 10 men the Town showed good character and in the 74th minute they broke the deadlock. After having his initial shot blocked down, the ball eventually came back out to Willie Tyrrell and he curled his sweet strike past Salthill keeper Ronan Forde.

The Galway side went in search of an equaliser and forced a few corners before they eventually snatched a last gasp equaliser deep into stoppage time when O’Brien converted the penalty.