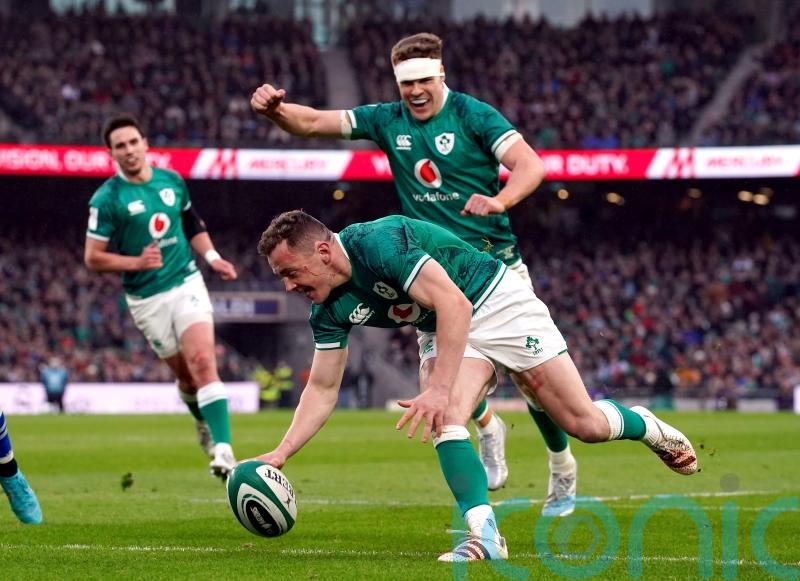 Michael Lowry shone on debut as Ireland returned to winning ways in the Guinness Six Nations by blitzing 13-man Italy with a 57-6 bonus-point success in Dublin.

A one-sided affair was ruined by the Azzurri being forced to play two men light for three quarters of the afternoon after Hame Faiva was sent off for a high tackle on Dan Sheehan, having replaced fellow hooker Gianmarco Lucchesi due to injury.

Those premature departures led to uncontested scrums and, under World Rugby rules, necessitated the removal of a second player, with number eight Toa Halafihi the man sacrificed.

Penalties from Edoardo Padovani and Paolo Garbisi were scant consolation for the depleted Italians as they slipped to a 100th Six Nations defeat and 35th in succession.

Ireland fly-half Carbery – making a second-successive start in the number 10 jersey – kicked two conversions, with replacement Johnny Sexton adding a further eight points as Andy Farrell’s men bounced back from their 30-24 defeat in France a fortnight ago.

Les Bleus remain in pole position for championship glory as the only team still with Grand Slam aspirations remaining.

But this routine nine-try victory – secured in unusual circumstances – keeps up the pressure on Fabien Galthie’s table-toppers ahead head of Ireland’s Twickenham showdown with fellow title hopefuls England in just under two weeks.

An Irish team showing six personnel changes from the pulsating loss in Paris raced ahead inside four minutes.

Hooker Sheehan, on his first Test start, was heavily involved, teeing up Carbery to crawl over the line for only his second international try on the occasion of his 30th cap.

Padovani’s long-range penalty put Italy on the scoreboard but the match swiftly deviated from the norm when New Zealand-born Faiva ploughed into the head of Sheehan.

That flashpoint came just 10 minutes after the early exit of the stricken Lucchesi.

Ireland quickly took advantage of the numerical advantage, with Gibson-Park diving over.

Fleet-footed Lowry, who excited the crowd all day, was then mobbed by the entire Irish team after crossing on a dream debut, before skipper O’Mahony marked his first Six Nations start since being sent off against Wales last year by diving over in the left corner to secure the bonus point.

Ireland’s Lowe, back in action after injury saw him miss the opening two rounds, reinforced the difficulty of the Azzurri mission by dotting down unopposed seven minutes into the second period.

Star man Lowry again brought spectators to their feet with his second, before lock Baird celebrated his maiden Six Nations start by charging down Alessandro Fusco’s attempted clearance to gleefully dive over.

Things went from bad to worse for the beleaguered Italians late on.

They finished the encounter with just 12 men as Braam Steyn was sin-binned five minutes from time for deliberating knocking the ball into touch, before Lowry unselfishly passed up the chance of a hat-trick by providing the assist for Lowe’s second.

England and Scotland will provide far sterner tests for Farrell’s men in the coming weeks but a professional job here was completed by replacement Treadwell crashing over in the final moments on his first Test appearance for more than four years.