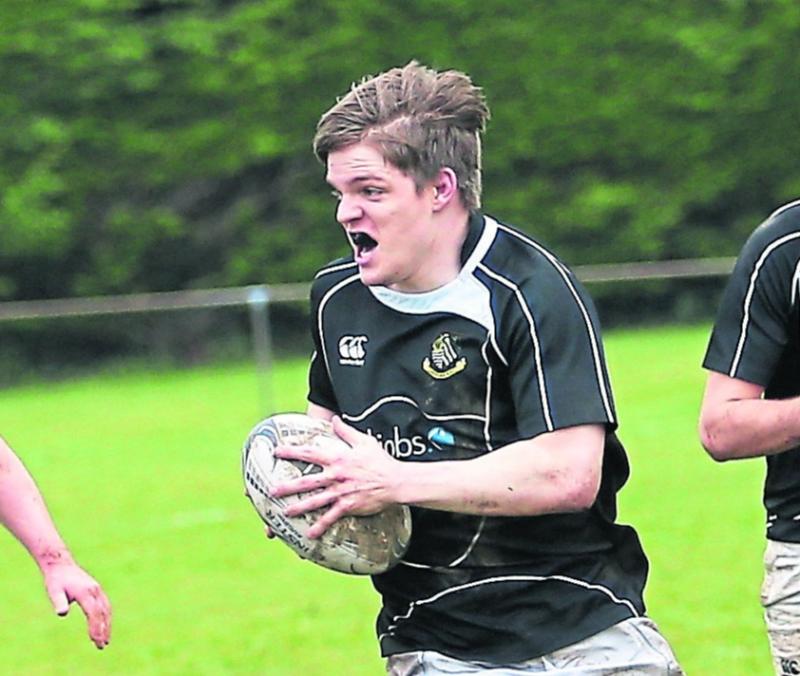 Longford First XV kept the fate of the season in their own hands when they secured a four try bonus point win away to Clondalkin in the Leinster League Division 1B game on Sunday last.

The home side did not make it easy for Longford with a late fightback making things far more uncomfortable than they should have been.  However, the mission on day was to come away from Clondalkin with five points and this was achieved against a side who are always tough to beat at home,allied to them turning over Longford earlier on in the season in CPL Park.

Clondalkin started off the game the better of the two sides putting Longford under pressure.  They were aided by a wind blowing down the pitch into the bottom left hand corner. They put together a lot of phases and Longford were largely confined to their own half.

However, Longford’s defence was good and they gradually started to move up the pitch.  On the 13 minute mark Longford scored one of their best tries of the season. It all started with a scrum on the Clondalkin 10m line in the middle of the pitch.  Longford first went right stretching the home defence then worked it to the left where off loads from Ian McCormack and Finbarr McGowan eventually put Joe McGowan in for an excellent try.

It was then Clondalkin’s turn to come back into the game as one of the many squalls that passed over Gordon Park, Kingswood during the game took hold.  Longford showed plenty of endeavour but as at other times of the season just lacked the precision required with knocks on’s and turnovers halting their momentum.

Clondalkin came hard at Longford but the away defence was generally very good.  However, they managed to earn two kickable penalty opportunities on the 25 and 27 minute marks, one of which was converted to narrow Longford’s lead to two points heading towards half-time.

Longford then turned up the heat with a great surge before the break where they pummelled the Clondalkin line. Longford first missed a kickable penalty and then took the brave decision to kick to the corner from an arguably more kickable position.  The line out was won but the maul held up before the line.

It then took a moment of magic from Captain Benny McManus to justify his decision to kick from the corner.  He carried up the middle just short of the Clondalkin 5m line and as he was being tackled offloaded superbly to the on rushing Hubie Connolly who went over for a converted try to leave the half-time score 3-12 in Longford’s favour.

The Longford team were no doubt hopeful at half-time that with the wind now at their backs that they could push for two more tries and a bonus point win.

However, the home side had other ideas and struck first when their centre ghosted through the middle of the Longford ruck and rounded two defenders to go in for a converted try to narrow Longford’s lead to four.  Longford now knew they were very much in a game and this seemed to galvanise them back into action.

Longford turned up the pressure and set up camp in the Clondalkin 22.  They were unlucky not to go over sooner but after a series of the Clondalkin infringements including a slap down which prevented an earlier try the Clondalkin 8 saw yellow.

Longford then used their numerical advantage to go over for two tries and the bonus point with Ryan McHugh going over in the corner after a carry up the middle by No.8 Packie Molloy who was excellent all day.  Ryan even nailed the really tough conversion.

Next up was Barry Stewart who crashed over for a converted try after Longford kicked to the corner and were held up just short of the line.

Longford then started to ring the changes and the last fifteen minutes were not comfortable. They leaked two more tries either side of a Ryan McHugh penalty and were relieved when the ball was put out of play to signal the final whistle and a 20-29 bonus point win.

Scoring four tries against a good Clondalkin side is very satisfying even more so that it means that they have second place to play for in their last match of the season at home to Monkstown on March 22nd and the prize of a promotion play-off against Dundalk.

“Job done. We can’t get any more than 5 points today and that’s what we got. We now know what we have to do against Monkstown in two weeks, and that is up to us. We talked about worrying about our game and I think the boys did that.

“Clondalkin are a good side, with some good players in there, but like when we played them at home earlier in the season individual errors let them in for scores we shouldn’t have conceded.

“We kick to relieve pressure, admittedly not probably where we needed it to be, but our chase is good, we get bodies to the tackle and slow the ball, have a reasonably good D line set but then a lazy tackle lets a 50 metre score in. And I suppose that kind of summed up the game, good in parts and not so good in others. But we were reasonably happy on the line and our 20 all came in and did a job.

“Packie had a good game off the back of the scrum for us. Ian and Cormac gelled well in the midfield too. We will look at our scrum though, as Clondalkin got a bit of change off us there. Now it’s a change of focus again as we have Carlow at home in the 2nd round of the cup.

“We have a few knocks to have a look at this week and see where we are at there, it’s a different opportunity. I’ve also gotta mention the J2’s, a good win after a long break without a game too. They are now heading into the Monkstown game unbeaten, league won from the last round. An unbelievable achievement, they have beaten anyone that’s come up against them and they would have to go into the cup with a real belief.

“For the guys that have been in there since I came around when we struggled to get players together this is a pat on the back for them. Phil Dardis has led the boys brilliantly all season, and actively worked behind the scenes to push the group.

“And it’s a reward for the Geelan’s, and the likes of them that have fought and worked so hard over the years on tough days, and the young new boys have seen that I think and brought into that want. You can see it on a Friday night with 30 plus players training.”

Longford at home to Carlow in Provincial Towns Cup on Sunday

Longford Senior Men take on Carlow this Sunday in the second round of the Provincial Towns Cup at home in CPL Park at 3pm.

A home Towns Cup fixture is always a great occasion so make sure to put this Sunday March 15th at 3pm in your diaries.

Tries on the day were from Sammy Murphy, Steve Coy and Peader Kenny who scored his first senior try.

Longford bossed proceedings in the first half with the wind at their backs but found the going a lot harder in the second half playing against the wind.  However, the J2s are a very good side and dug deep to secure the win.

Longford J2s will be presented with the league trophy at the Monkstown match on March 22nd and will play Cill Dara in the second round of the cup on the weekend of March 28th/29th.  Such is the form of the side over the season, I would not be betting against them for a good cup run!