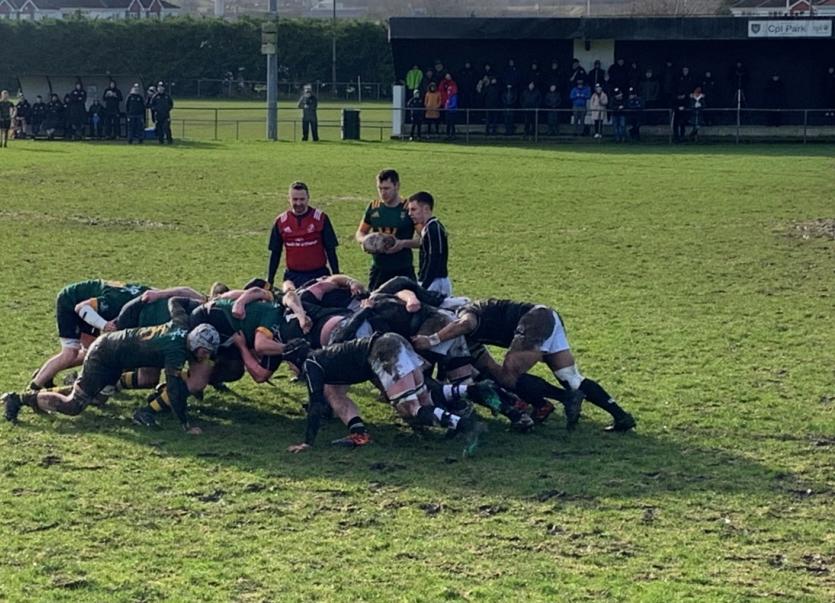 Longford secured a brilliant bonus point win to keep their quest for a promotion play-off alive in a muddy, wet and very windy CPL Park on Sunday last.

To all the world, like the previous weekend where Longford’s match against Boyne fell victim to Storm Ciara, it looked like Storm Dennis would exact the same toll.

However, the main pitch at Longford had other ideas, as despite being largely submerged on Saturday, it managed to pass a 10am pitch inspection and so we were all go!  Storm Ciara/Dennis did exact a toll however, leaving the going very heavy under foot and a near gale force wind blowing across the pitch.

The wind was blowing down the pitch from the clubhouse end from left to right, which favoured Boyne in the first half as they were playing down from the clubhouse end.  The first ten minutes were a case of both sides sounding each other out and trying to find some rhythm in the wind and muck.

However, Longford gradually started turning the screw and secured the first score on 11 minutes when wing Daithi Connolly broke down the wing, was tackled, the ball recycled and carried up and then fed out to Connolly on the wing who went over in the corner for an unconverted try.

Longford continued to pile on the pressure but Boyne gradually came more into the match where conditions made it a lottery at times.  A disastrous 2 minute period from a Longford point of view saw their five point lead over turned to a five point deficit, 25 minutes in.

Firstly, Boyne were awarded a penalty about 25 metres out after their first real attacking foray close to the Longford 22, which was duly knocked over.

Disaster then struck straight from the kick off where Boyne gathered and moved the ball, danced through the Longford defence and went in straight under the posts for a well executed score.  Boyne remained in the ascendancy after the try but Longford began to battle back.

The home side gradually built pressure and then set up camp on the Boyne line just before half-time.  Longford pummelled the Boyne line and eventually went over for an unconverted try in the left hand corner after the ball was moved wide to Ian McCormack.

This meant that at half-time the match was level at 10-10 but Longford would have the wind advantage in the second half.

The second half started off with the sky growing darker and darker and threatening to return to storm mode, so much so, that the floodlights had to be turned on.  However, Longford settled into the half the better and started to use the wind to their advantage kicking the ball into the Boyne 22.

It was not long until Longford started to take control of the match via a great try from tight head Dylan Quinn who crashed over after good work close in for a converted try.

This was then followed up by a quality bonus point try by Joe McGowan who after the forwards laid a great platform the ball was moved out the right to McGowan who stepped in and cut clean through the Boyne defence to go in under the posts to give Longford a 14 point lead.

To their credit Boyne never gave up and came right back at Longford scoring an unconverted try.  However, Longford were not finished and it was fittingly captain Benny McManus who crashed over for the home sides fifth and final try.  Benny and the whole Longford pack certainly stood up on a day where hard carrying was the order of the day.

Boyne tacked on a late try to close the gap for what proved to be a consolation score.

Longford have taken ten points from their last two games and now move up to second place and into the coveted promotion play-off spot, with two matches to go.

“It’s been a tough couple of weeks trying to plan and prep for games and the weather getting in the way. We really wanted this one to go ahead after the disappointment of not playing last Sunday.

“It’s been really hard to plan ahead and make sure we have the guys ready to play, and not knowing are we playing or not has been really frustrating. It’s hard to keep a momentum going. Even training has been affected by the weather, which knocks on into how you structure your week.

“Today we got the 5 points we were after in really difficult conditions for both teams. We knew Boyne would look to play width like they did up there when they really stretched us in the second half and we had spent a bit of time working on our D for that but they carried direct too today as well as their 2nd man plays and kept asking questions of us.

“For our attack we probably let our game go in on ourselves a bit, with the conditions maybe being in the back of our mind a bit in how we played. Saying that the boys stuck with the plan of not forcing the off load, recycling the ball and going again.

“We were a little slow getting a 2nd or 3rd guy in around the tackle but the conditions again didn’t help that, it was really sticky out there. So to try and get shape and pattern going was never gonna be easy.

“I thought we played the pitch pretty well in that 2nd half, we worked ourselves into pressure positions and got scores off that, while not always making the right decisions in the 5m, we eventually got what we came for.

“Our line out operated really well, on opposition ball we put pressure in their throw and got a bit of change off that. Any day you score 31 points isn’t too bad, I am disappointed with conceding 22, a few soft scores.

“I want us to be the best defensive team in the competition and we didn’t quite hit it today. But you can’t get any more than 5 points and we did that.

“We now prepare for the clash against  Monkstown. It’s a great opportunity this week, and it’s our next job and one we will have to be spot on for.

“ For me turning the graph green is half the job, (the boys know what I mean), it’s finishing the chances off. We will get chances, and we know taking them is the opportunity we want. Every game counts for us.”

At home to Monkstown on Saturday

Longford Senior Men completed Stage 3 of ‘Operation Promotion Play-off’ in the mud and wind at CPL Park on Sunday in securing a bonus point win versus fourth placed Boyne.  The win was even more significant in that second placed Tullow had their match versus Clondalkin called off due to the weather.

Before this match Longford were a game behind Tullow due postponements, so overall Longford have now moved five points clear of Tullow, with both sides having two matches to play.  To boil it down, Longford need six points from the last two matches to secure the promotion play-off.

Finishing level with Tullow will probably not work from a Longford point of view, as Tullow have a better head to head record.  Longford will have to do it the hard way however, as they welcome champions Monkstown to CPL Park on Saturday and then have to travel to Clondalkin for their final match.  The Dublin side came away from CPL Park with the points earlier in the season.

Longford J2s did not play yesterday as Boyne has already conceded the match meaning that Longford J2s have won Division 1B League title with two games remaining.  This is a massive achievement for the Philly Dardis captained side and is a credit to Glenn, Steve, Ciaran and all the coaching team. It is also a huge honour for the club.  Details of when the trophy will be awarded will be announced in the coming weeks.

So, all roads lead to CPL Park on Saturday next February 22nd where we ask all members and friends to support the Senior Men in their penultimate home league game of the season and see the J2 champions in action.