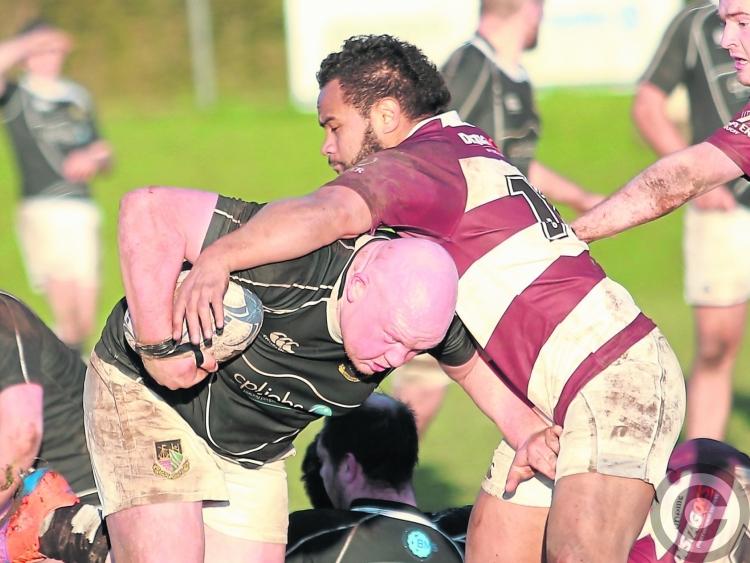 Padraig O'Farrell on the ball for Longford against Tullow. Action from the Leinster Rugby League Division 1B game at CPL Park on Sunday last Picture: Syl Healy

Longford succumbed to a two point setback against Tullow in the Leinster League Division 1B clash at CPL Park on Sunday last.

In a similar fashion to the opening match of the season where Longford and Tullow fought out a draw in torrential conditions, there was little to separate the sides on this occasion.  The match could be pivotal in the battle for second place and possible promotion and one in which Longford will rue not converting five good line breaks into scores.

The majority of the match was played between both teams 22s, with handling errors and turnovers punctuating the match.  Aggressive press defences were applied by both sides, which made attack seem claustrophobic.

Tullow stuck to their guns for most of the match with aggressive defence, close in carries and putting the boot to the ball, where Longford looked to go wide at every opportunity often slipping the ball behind the first attacker, in an attempt to create more space.

The match started off at a frantic pace with both sides keen to impose their games.  Tullow managed to get an early penalty, which was knocked between the posts to give them a 0-3 lead.

Although Tullow enjoyed their fair share of possession, it was Longford who were creating most of the chances with 5 clean line breaks by the likes of Ian McCormack, Barry Stewart and Kieran O’Gorman but time and again a Longford handling error or last ditch defence enabled Tullow to clear their lines and relieve the pressure.

The killer blow just could not be landed by Longford with knock-ons and bad decision making scuppering the hard fought pressure.  Longford especially dominated the last ten minutes of the first half and Tullow were glad to see the half-time whistle with their three point lead intact.

Longford continued the pressure from the kick-off in the second half and got back on level terms after five minutes from a Ryan McHugh penalty.  Tullow were very streetwise in defence all day and were content to give away a penalty if Longford threatened their line.

Disaster then struck for Longford from the restart as Tullow secured their first line break of the game, worked it left to right and then back to the left again, with their winger crossing in the left hand corner.

This left a difficult conversion attempt, but one which was well converted, although it did not look like it came off the boot as planned.  So after dominating large parts of the match, they now had it all to do, down 3-10.

On 55 minutes another promising Longford move was halted by the concession of a Tullow penalty, with Ryan McHugh bringing Longford within four of the away side.  Longford huffed and puffed for the next 10 minutes but their hands let them down just as something promising looked to be in the offing.

The match looked like it might have turned in Longford’s favour when a few changes to the scrum resulted in Longford winning a penalty by pushing Tullow off their own ball.  Longford kicked the ball to the corner twice and both times Tullow infringed at the maul. The accumulating penalty count finally saw the referee go to his pocket and leave Tullow with only 14 men with about ten minutes to go.

Longford chose to back their scrum dominance against 14 men and it was proven correct with No.8 Kolo Kiripati crashing over on the right. Unfortunately the conversion attempt was narrowly wide but Longford took the lead for the first time in the match, 11-10.

With eight minutes left on the clock Longford looked to bunker down and lock their defence tight.  However, the bunker was breached by a Tullow penalty with five minutes to go to leave them with a two point deficit to overcome and the clock ticking down.

Unfortunately, although Longford gave it their all, it proved to be a bridge too far and they had to settle with just a losing bonus point for the second week in a row and a loss to one of their main promotion rivals.

It has been a rocky two weeks for the First XV with back to back defeats to Clondalkin and Tullow.  What is even more unusual is that CPL Park is normally a fortress for the side. Glenn Baskett and his charges now turn their attention to their final league match of 2019 away to bottom side DLSP and will be hoping that third time is lucky in their quest to get back on the winning trail.

In better news Longford J2 XV maintained their seven point margin at the top of their league, courtesy of a walkover from Tullow.  DLSP withdrew their J2 XV from the league so at the moment the Longford J2 XVs next match is away to Carlow along with the J1 XV on January 12th.

“A good friend of mine says the sun will come up tomorrow, he’s right but another home defeat is hard to take. While our performance was definitely an improvement on last week’s work, I felt we weren’t smart enough with how we managed the pitch today.

“We talk about field position applying and relieving pressure, today I reckon we didn’t relieve pressure on ourselves and as a result didn’t apply pressure on the opposition. They controlled the momentum of the game pretty cleverly. We thought our pack stood up today against a big physical team, but we will need to look out how we attacked today, the width we used.

“We now find ourselves in 4th spot, two weekends ago we were looking to keep building towards winning the league. So now we’ve gotta look at the vid and be honest with how we are playing, and if we are right in how we are going out to perform.”

Away to DLSP on Sunday

Longford’s J1 Senior Men were back in CPL Park on Sunday last looking to bounce back from a defeat the previous Sunday versus Clondalkin.  The challenge was not going to be easy as Tullow are always a difficult side to put away and one which Longford needed to front up to, to have a chance of winning.

Our J2 men were looking to keep their winning start to the season going against the same opposition and maintain their seven point lead at the top against one of the better J2 sides in Leinster.  They maintained their lead courtesy of a disappointing walkover given by Tullow.

Longford J1s attention now turn to their final league game of 2019 away to DLSP in Kilternan on Sunday. The season has not gone well for DLSP so far, where they lie bottom of the league.

Longford accounted for DLSP 25-3 earlier on in the season with a bonus point win but will know that they cannot take their eye off the ball if they are to come out on top in this match and maintain their challenge for promotion.

Unfortunately, DLSP withdrew their J2 side from the league so there will be no J2 match.