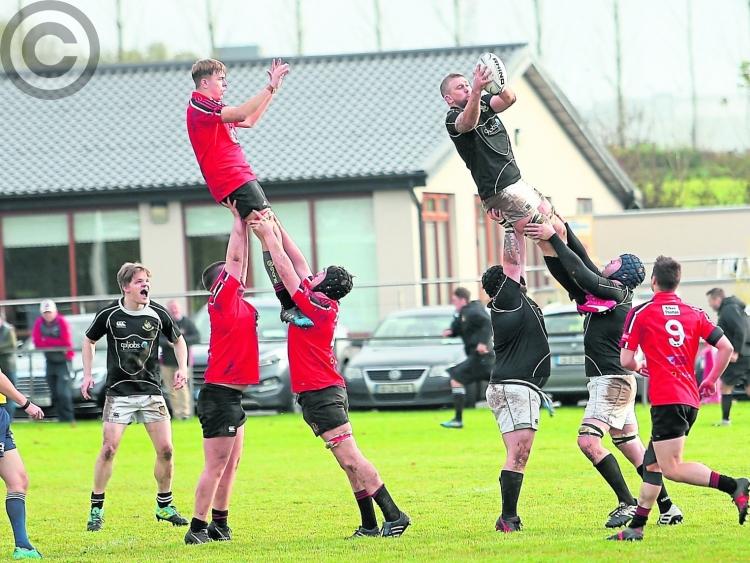 Kieran O'Gorman winning the ball for Longford in the line-out. Action from the Leinster Rugby League Division 1B game against Cill Dara at CPL Park on Sunday last Picture: Syl Healy

Longford Senior Men’s J1 XV are back on the winning trail after an emphatic 43-18 bonus point victory over Cill Dara at CPL Park on Sunday last.

In total Longford ran in seven tries and were unlucky not to tack on a few more. However, midway through the first half such a bonus point win looked unlikely, as Cill Dara led the way, 7-10.

Longford laid the foundations for the victory with devastating starts to both halves.  First of all, 210 seconds into the match, Graeme Bester crossed for Longford’s first try after a great break from the back line.  Graeme must have been inspired by South Africa’s brilliant win in the World Cup the day before!

However, if Longford thought they were in for an easy afternoon, they were very much mistaken, as Cill Dara came back into the match strongly and made the first half into a very even contest.

A lot of the pressure that Cill Dara exerted in the first half can be traced back to Longford mistakes.  One such mistake was after a Cill Dara attempt on goal, Longford knocked on behind their own try line to gift Cill Dara a five metre scrum, which eventually resulted in Cill Dara crossing for a converted try to level up the scores.

Cill Dara’s next score was again from a Longford mistake given away at the break down and then put through the posts to leave Longford trailing by three points, 7-10, after twenty minutes of play.

Longford finally seemed to swing into action at this stage with passes starting to stick and the men in black/white making ground when carrying into traffic.   Firstly, after a great move where Graeme Bester timed his pass perfectly to the onrushing full back Ian McCormack, he cut through. It looked to everyone like he would score Longford’s second try only to be held up on the line.

However, Longford were not to be denied with the aforementioned Bester crossing for his and Longford’s second try under the posts.  The try was the result of great interplay between Longford’s backs and forwards, which proved to be the feature that proved the difference between the two sides.

Cill Dara did not take the Longford try well and came back at Longford strongly, knocking another penalty between the sticks.  Longford weathered the storm and were next to cross the whitewash via another brilliant try scored by flanker Conor Craig, leaving the half-time score 19-13 in favour of the home side.

The first half was frantic with both teams trying to play at top speed.  Cill Dara’s strength lay in their forwards carrying hard and making the breakdown a lottery.  It looked like if Longford could play with a small bit more composure that they could nullify Cill Dara in the forwards and use hands to stretch them in the hunt for more scores.

Indeed, this is what Longford did and in devastating fashion, taking the match away from Cill Dara in the opening minutes of the second half.  First of all, Longford earned a penalty straight from the kick-off after great work on the floor from Hubie Connolly, which Ryan McHugh duly knocked over.

From the next phase of play Longford struck again for their bonus point try starting with a great Colm Glynn break down the tramline.  Glynn offloaded to Shane Rodgers who could have went for the line himself but made sure by giving a pass to his right to Joe McGowan to put him away under the posts leaving the score 29-13 five minutes into the second half.

Longford continued in the ascendancy and missed a shot at goal.  However, they did not let Cill Dara off the hook.

Longford were unlucky to be denied close to the Cill Dara line with a foot in touch.  They then applied pressure to the Cill Dara throw, which went over the top and was picked off by Hubie Connolly, who crashed over for Longford’s fifth try and one of the easiest tries he is ever likely to score!

Cill Dara then answered back with a try of their own.  It proved to be their final consolation as the men in black/white finished the game with a flourish with two more tries to round off a resounding 43-18 bonus point win.

It was a great performance and a great response to Longford’s first loss of the season two weeks ago in Monkstown. Next up is a trip to face Boyne in Drogheda on Sunday.

“We set ourselves the target today to get a BP win and knew Cill Dara would really test us but 43 points is a good return. After not finishing the job last time out in Dublin we know we now have to start picking up positive wins to try and keep pressure on the top spot.

“We have set ourselves a defensive target and have improved throughout the season so far through a lot of hard work, but it’s what we haven’t done with the ball that we need to be better at. Before today we were second last in the competition for our attack so we had to improve that.

“Again we created chances but today we executed more of them, while not being as good across the 80 as we would like we did show some good patches.

“Cill Dara put a lot of pressure on our tackle area and didn’t make it easy for us to get quick clean ball, and that’s something we will need to get better at in Boyne next weekend.

“I thought Kieran, Barry and Benny worked incredibly hard in there today, and Graeme got us breach regularly. Lots to look at but job done, Boyne are another different test next weekend.”

Away to Boyne in Drogheda on Sunday

Longford Senior Men took on Cill Dara in CPL Park on Sunday last looking to get back on the winning trail after succumbing to Monkstown two weeks ago.  They certainly did that with a 43-18 bonus point win and moved back into second in the table.

Next up is a trip to Drogheda to face third placed Boyne on Sunday.  Boyne were relegated from Division 1A last season and plied their trade in the AIL Division 2C until a few years ago.

It will be a tough task for Longford but one which they are up for and know that they need a performance if they want to stay in the race for promotion and the Division 1B title.

The J2 XV were given a walkover by Cill Dara on Sunday last.  They are flying this season and would have preferred the game.  However, they remain four points clear at the top and will hope that Boyne will be a position to put out a team next Sunday.