Longford Rugby Club at home to Cill Dara on Sunday 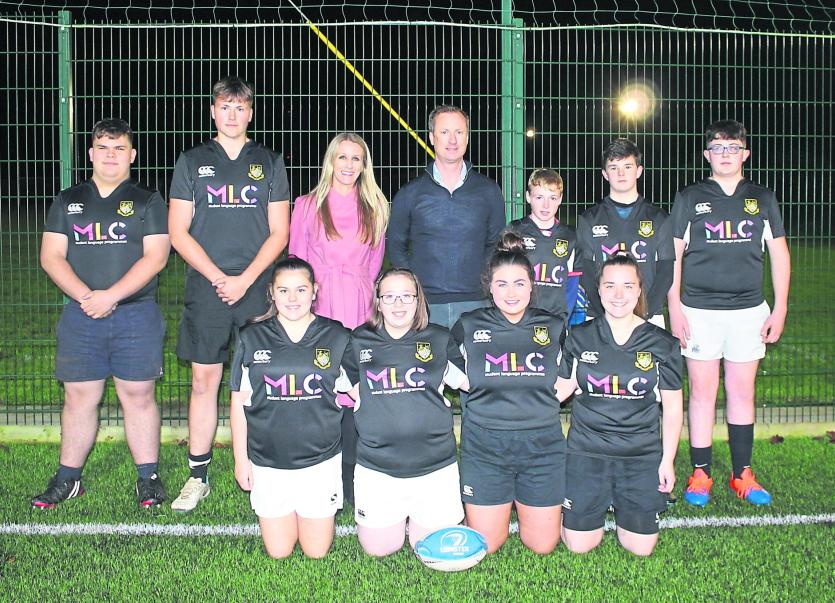 Angela & Aidan Brady of Midland Language Centre (MLC), the new sponsors of Longford Rugby Club Youths Section (U-14 to U-18), pictured with some of the youth players

Longford Senior Mens J1/J2 sides are back in action on Sunday in CPL Park with two home matches against newly promoted Cill Dara.

Longford have dropped to third in the league after succumbing to Monkstown in Sydney Parade last Sunday in a match where Longford had more than enough chances to come away with four rather only one point.

The league now enters a critical phase for Longford, if they are to mount a challenge for league honours. Longford will therefore be looking to pick up three wins from their November matches.

Cill Dara are always a tough proposition, with the last match between the pair being in the Provincial Towns Cup Second Round in February, where Longford eventually proved too strong for a Cill Dara side that put it up to Longford for most of the match.

The following Sunday they face a trip to Drogheda to face Boyne, who were relegated from 1A last year and plied their trade in the AIL until a few years ago. Interestingly, Longford also played Boyne in last season’s Provincial Towns Cup, where they ground out an excellent win on a bitterly cold January day in a proverbial game of two halves due to the gale blowing down the pitch.

The final match of November is versus Clondalkin who were also promoted from 2A last season. Longford have played Clondalkin a lot over the last ten years and it is always an entertaining encounter between the two sides. Even though based in Dublin Clondalkin bring a country style feel to their play and mentality.

After this Longford will have a good idea of their ambitions for the season, as it marks the halfway point of the 19-20 season, with the league due to be completed by the middle of February and before the Provincial Towns Cup kicks-off for the first time.  Remember kick-offs move half an hour earlier in November to 1pm for the J2s and 2:30pm for the J1s.

Our J2 side are flying at the moment under the Captaincy of Philly Dardis are flying with four wins from four and are four points clear at the top of the league. They would really also appreciate your support.

Longford RFC are pleased to announce that Midland Language Centre (MLC) are the new main sponsor for the Longford RFC Youths Section.  Rugby is thriving in Longford with the club fielding teams at Youths level for both boys and girls from U-13 to U-18s, with 100s of underage players training and playing every week.  Great new innovation for the club in the last few years is the fielding of teams at Youths level for Girls and our new state of the art 4G training pitch.

The MLC logo will appear prominently on all our new Longford RFC Youths jerseys.  Aidan and Angela Brady from MLC dropped by the club last week to meet some of the players and officially present them with the jerseys and tell us a bit about MLC and their new sponsorship agreement.

“MLC (Midland Language Centre) organises English language programmes for European students. We have been working with Irish host families and international students since 1976. Our programmes allow students to develop their English language skills, immerse themselves in a different culture and develop their independence through time away from home, in the safe and welcoming environment of Irish family life.

“We have a fantastic team based in our office in Red Leaf House, Longford, and from here we work with hundreds of schools and families all across Ireland.

“Our programmes run during the summer and throughout the academic year. Some of our students stay in and around Longford, an experience which they enjoy with many fantastic local host families and which we feel is also a welcome addition to Longford in terms of culture and economic contribution.

“We also offer programmes for Irish students who wish to have a similar experience in France, Spain or Germany and although we work across Ireland, we have taken great pleasure in organising School tours and individual programmes for several local schools and many local families over the years.

“The opportunity to get involved with Longford Rugby Club was very exciting for us, both because it is well aligned with what we do at MLC, and also on a personal level we appreciate the value and opportunity that having such an active and progressive rugby club brings to the people, young and old, of Longford’.

Longford Rugby Club are looking forward to working with Aidan, Angela and all at MLC over the next few years and thank them very much for their generous sponsorship.  Our thriving Mini’s (U6-U12) section is still looking for a Main sponsor. If you would like to do so, please contact Mini/Youth Chairperson, Gerry Carthy or any of the Coaches.