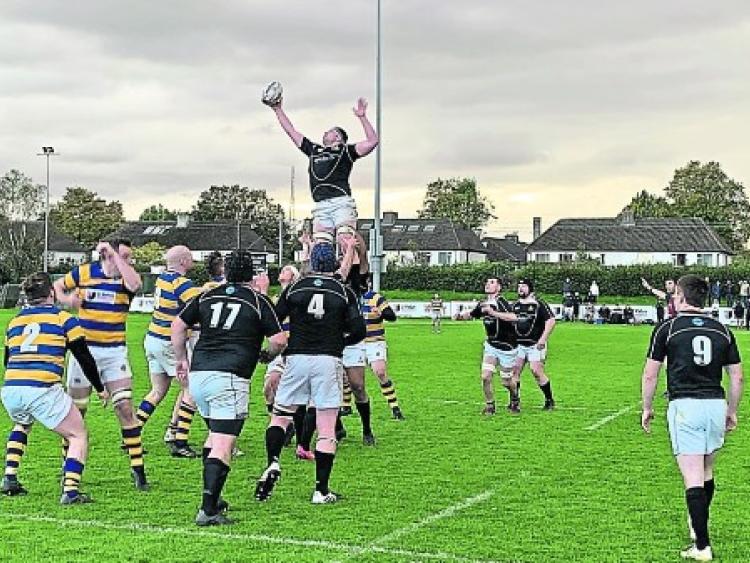 Barry Stewart winning the ball for the Longford First XV against Monkstown. Action from the Leinster Rugby League Division 1B game at Sydney Parade on Sunday last

Longford left Sydney Parade on Sunday last wondering what could have been, as if they had managed to convert one of four good chances, they would have left with four points.

As it happened, they dug deep to move within losing bonus point territory at the end of the match.The match was a pulsating contest between two well matched sides who were first and second in the table coming into the match.

Monkstown flew off their defensive line and put the Longford attack under pressure.  However, they did not stop Longford securing quite a few line breaks during the game and try scoring opportunities.

Monkstown had the first opportunity to score within the first five minutes.  They were awarded an early penalty, which they decided to kick to the corner rather going for the posts.  Their maul was well controlled by Longford and tenacious defence forced the mistake from Monkstown and allowed Longford to clear their lines.

Longford’s best period of the game then took place.  As usual strong forward carries along with enterprising back play was putting the home side under pressure.  Graeme Bester was released up the centre where he made a good line break, he then offloaded to Hubie Connolly who passed to the onrushing Shane Rodgers who was brought down just short of the line.  He was then rather harshly pinged for holding on and Monkstown relieved the pressure.

However, Longford were not to be denied and came right back at Monkstown and it was full back Ian McCormack who crossed for an unconverted try after 16 minutes to put Longford into an early five point lead.

Unfortunately, the lead was shortlived as Monkstown scored a converted try five minutes later to go into a two point lead.  They kicked to the corner and again tried to maul the ball over the line. However, Longford stopped the momentum. Monkstown then went through multiple phases to work an overlap on the left wing where the try was scored.

Longford came back at Monkstown again and will be disappointed not to have went over for their second try with ten minutes left in the first half.  They pummelled the Monkstown line for multiple phases, but eventually a Longford handling error let Monkstown off the hook. Monkstown took advantage, landing a great long range penalty just before half-time to stretch their lead out five points.

Longford came out of the traps strongly in the second half again, pouring the pressure on but a handling error again allowed Monkstown to relieve the pressure.  It was one of those matches where Longford seemed to be trying too hard at times and some forced passes were the main cause of the handling errors.

Monkstown came into the match strongly for the next twenty minutes and put Longford under a lot of pressure.  The Longford defence stood firm and despite being on their line a few times dealt well with what Monkstown threw at them.  However, Monkstown managed to tack on another penalty with 15 minutes to go, to leave Longford requiring two scores to win, the score now being 13-5.

To their credit Longford never gave up and really ratched up the pressure for the last ten minutes.  They forced two kicks at goal, the second of which was successful to bring them back into losing bonus point range.

The Longford scrum was gradually gaining dominance and they started to push Monkstown right off their own ball.  Longford were awarded a series of penalties and from one of these was worked out to the wing creating an overlap.

The last pass was given and it looked to all the many traveling Longford supporters that victory was about to be snatched from the jaws of defeat but the pass was spilled and the referee blew for full-time meaning Longford had to console themselves with a losing bonus point and regroup for the challenge of Cill Dara visiting CPL Park in two weeks time.

At home to Cill Dara on Sunday November 3

Next up is Cill Dara in CPL Park in two weeks’ time. The last meeting of the two sides was last February in the Provincial Towns Cup where Longford overcame a spirited challenge from a team that was promoted from 2A next season.

Further improvement is required from Longford to get to the level that they know they can play at.

On the flip side the Senior Men’s J2 side under the captaincy of Philly Dardis are flying with four wins from four and are four points clear at the top of the league.  They know there is a long way to go too but it is a great position to be in.