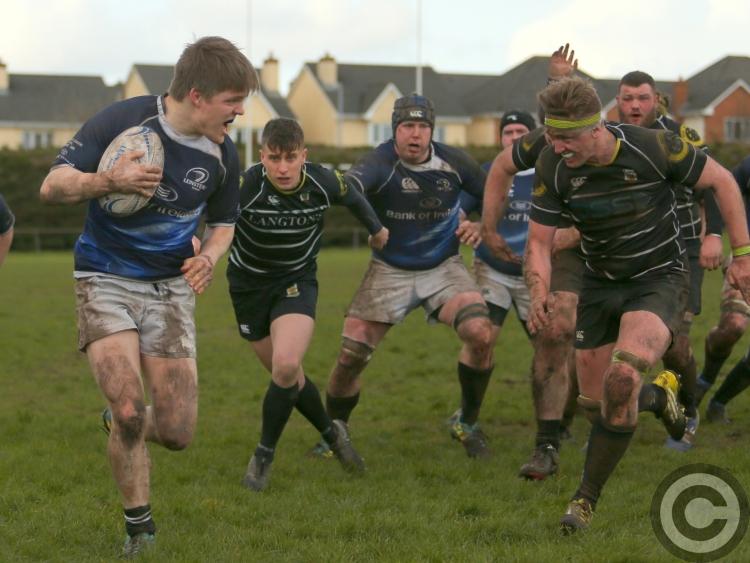 Hubie Connolly breaking away after the line-out which led to Longford's second try in the Provincial Towns Cup quarter-final against Kilkenny at CPL Park on Sunday last. Picture: Syl Healy

Longford scored a great win against Kilkenny at CPL Park on St Patrick’s Day to advance to the semi-finals of the Provincial Towns Cup against Wicklow.

Kilkenny play in the Division above Longford so much of the expectation was that they would advance at the expense of the home side. However, Longford were in no mood to follow the expected script on Sunday last.

The match kicked-off with Longford playing against  a strong wind. It was clear from the kick off that getting out of their own half would be difficult and the main escape route would be keeping the ball in hand.

Kilkenny opened up the match well and immediately put Longford under pressure. It eventually told with Kilkenny crashing over for a converted try after six minutes.

Longford came right back at Kilkenny. They gradually worked their way up the pitch and after a period of sustained pressure Longford got their reward with full back Ian McCormack crashing over for a well deserved converted try.

Kilkenny then came right back at Longford and exerted a lot of pressure on the home defence over the rest of the first half. Their main weapon was their driving maul and on a few occasions they put the Longford defence under serious pressure. In spite of this, Longford repelled all the pressure and restricted the visitors to one kick at goal, which they failed to convert.

It was a major plus for Longford coming in with the scores level (7-7) at half-time and this presented a big opportunity to go at Kilkenny in the second half with the wind now in their favour.

To their credit this is exactly what they did.  Barring some small periods, Longford bossed the possession and territory stakes on the changeover and put the Kilkenny defence under serious pressure for long periods.

However, one thing that is evident from Longford’s games against Division 1A sides is that defences are well organised and leave less space to exploit on the pitch.  This resulted in Longford finding it difficult to convert their superiority into points on the scoreboard.

Longford eventually took the lead for the first time when Ryan McHugh knocked over a penalty fifteen minutes into the second half and late in the game Paul Gallogly crashed over for a converted try after great build up work from Dylan Quinn.

This felt like it was the score to put Longford through to the semi-finals.  The home side made sure of the victory just as normal time elapsed with a great long range penalty from Ryan McHugh to leave the final score 20-7.

This is a victory Longford can be very proud of and a match that will give them a good indication of what to expect when they play Bective in the promotion play-off on Saturday March 30th.

The following weekend, Longford will be out again in the semi-final of the Provincial Towns Cup against Wicklow at Naas RFC on Sunday 7 April. One thing is sure there is a lot more rugby to be played and a very exciting few weeks ahead.

“We are really happy for the boys. A semi-final is a good reward for the work they have put in. We knew from last season Kilkenny were a well organised team who would ask lots of questions of us and I thought we answered most of them.

“It took the Kilkenny score for us to react, which unfortunately is a bit of a trend for us! I thought the way we held the ball in to that wind in their half was pretty good, and when we got the score we thought 7-7 or even being 10-7 down would have been a good way to turn into the second half with the wind behind us.

“Ryan kept the scoreboard moving with some good kicks again at important times, and Dylan’s work for Paul’s try was good work in the right part of the pitch, something we haven’t always nailed lately.

“There’s a few things we still need to look at though, we talked about pressure and how we manage that, and we can always improve there. The boys can enjoy the win over Kilkenny for the result it is.

“For us now we look at Bective, the cup semi-final is parked and this is the next opportunity for us. Bective have been getting some heavy hitting help in to win this fixture and that shows the intent for them, but we can only worry about our job, everything else is just noise.

“The boys have shown they can put their heads down and ignore that noise before and we will be expecting the same over the next two weeks from them. For me the page is turned already to Bective.”