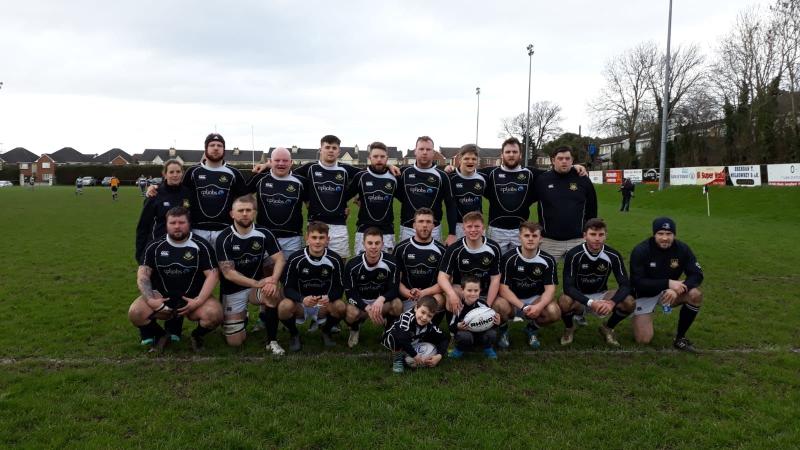 Longford Rugby Club first team squad pictured at CPL Park on Sunday last for the Leinster League Division 1B game against Suttonians. Also in the photo are mascots Dara Glynn and Donnacha Murphy.

What a day on Sunday last in CPL Park where the top two teams in Leinster 1B battled it out in a fierce clash.

Longford left nothing behind and managed to grind out a brilliant win against the table toppers Suttonians who secured the league title on the day by virtue of a losing bonus point.

Unfortunately, the league title had slipped away from Longford after a bad run around Christmas but Longford have bounced  back and now with one match to play can secure a promotion play-off with a bonus point win in North Kildare on Sunday week.

Suttonians travelled to CPL Park like they meant business.  Indeed, they brought a couple of bus loads of supporters, which contributed to a great atmosphere for the day but especially in the stand during the match.

Suttonians are a big side who are known to try and use their power to try and suck in the opposition defence and then spread it wide and that is exactly what they tried to do to Longford.

However, the home side were more than equal to it, putting in an outstanding defensive effort, which severely limited Suttonians chances and cut off their ball supply to the outside channels.

Like the week before a swirling wind blowing from the clubhouse end had a big effect on the game.  Longford played with the wind in the first half and it felt like a wind that was definitely worth a score or two.

Suttonians came at Longford hard at the start of the match but found no breaches in the Longford defence.  Longford then turned defence into attack and after a number of phases opened up the match scoring with a Ryan McHugh penalty to go into a 3-0 lead.

Suttonians were trying to keep the ball in hand due to the wind in their faces and when on the attack favoured attacking the Longford 12/13 channel.  However, Longford generally dealt with this tactic very well.

After a multi-phase Suttonians attack where Longford forced a knock on, the home side again went on the attack and managed to secure another shot at the posts, which Ryan McHugh converted to stretch their lead to six points.

The rest of the first half was a great advertisement for junior rugby with both sides having their moments.  However, Longford gradually upped the pressure and were camped in the Suttonians 22 on more than one occasion.  They will have been disappointed not to convert the pressure into points as it felt like they would need a bigger lead going into half-time playing against the strong wind on the changeover.

The second half was going to mean Longford keeping the ball in hand more to negate the wind and that is exactly what they did.  The forwards, especially as the half wore on, carried brilliantly to punch holes in the Suttonians defence.

Indeed, Longford opened the second half brightly and it was a mistake while on the attack that gave Suttonians a scrum on the home sides 10 metre line.  Suttonians had looked quite dangerous from set piece all day and it was a well executed move through the centre that put away winger Will Lyons for a converted try, to put them in the lead, 6-7.

There are many sides who would have lost confidence or dropped their heads playing into the wind and after expending a mighty amount of effort up until that point but it started to feel like on of those days where Longford would refuse to be beaten.

Longford had to work very hard to move up the pitch and played most of their rugby for the first 25 minutes in their own half.  When Longford were out of possession Suttonians were also making the home defence work hard. Some brilliant tactical kicking from their scrum half pinned Longford in their 22 on a number of occasions.

However, Longford gradually started to turn the screw with the pack leading the charge.  The home side’s first real incision into the opposition 22 was a kick into the corner but unfortunately the throw to the front of the lineout was deemed forward.

Longford were undeterred and kept their foothold in the Suttonians half.  After a number of great carries by the forwards followed by great hands from the backs, winger Ian McCormack crossed the line  for an unconverted try with 10 minutes to go. Ryan McHugh was unlucky with the conversion into the wind.

The home side continued to grow in confidence after this and it was all Longford as the match approached injury time.  However, there was more drama left as what looked like a certain try for Longford was intercepted on the Suttonians line by their Lithuanian winger Donatas Vilimavieius.

The crowd all held their breath as he raced down the wing for what looked like a certain try.  However, winger Joe McGowan and full back Sean Flynn took off in hot pursuit with Flynn coming across and McGowan pursuing from behind.  A brilliant combination of speed and team work saw them halt the big winger and indeed, Longford then managed to turnover the ball to retain their four point lead.

There was a lot of injury time played with Longford playing some great possession rugby to run down the clock and secure a brilliant victory in front of the biggest crowd of this season.  We live to play another day and know that securing a place in the promotion play-off is now in our hands.

It is hard to sum up the whole match, which was a real rollercoaster.  It was rugby at its best with two very good teams going at it 100%. A few words come to mind when summing up the Longford performance; heart, determination, organisation and belief.

Onwards and upwards now to the last league match versus North Kildare, a Towns Cup quarter-final versus Kilkenny at home on St. Patrick’s Day and potential promotion play-off on March 30th.

Congratulations to Suttonians on winning the league title.

Determination the key factor in quest for  promotion

"We are extremely proud of the boys. They had to work really hard for 80+ today. We thought 6-0 at half-time with the wind behind us probably wasn't enough. We left a score out there and knew Suttonians would kick behind us in the second half and put pitch pressure on us.

“And because we were playing into the wind we had to be smart where we kicked. But we thought we worked our way up the pitch well. To go behind off a well worked try and then get ahead again showed a good determination.

“The scramble on D was excellent at the end and we closed the game out well.  Suttonians deserved to win the league over the course of the season, but we did what we had to to get the win and now we can look ahead to the last league game against North Kildare and an opportunity to play for a result there.

“The result against Suttonians though was a group effort of all involved, and even though our J2s lost by 2 points in their game they all played a part in prepping each other at training."