Away to Tullow in the Leinster League Division 1B on Sunday 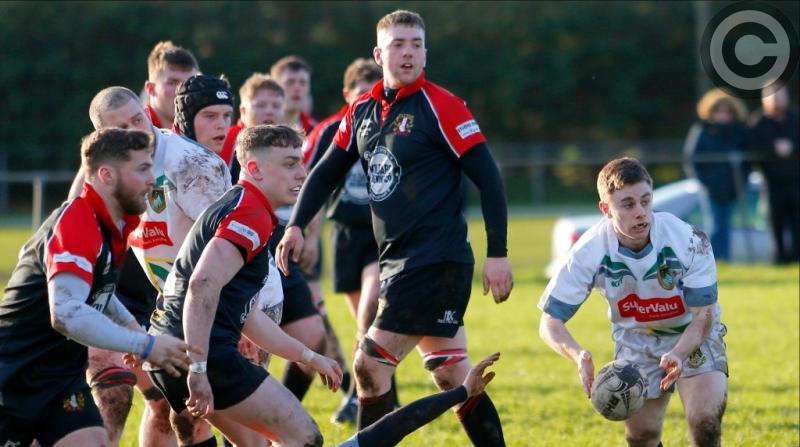 Longford weathered a strong challenge by Cill Dara to win through to the second round of the Provincial Towns Cup at CPL Park on Sunday last.

The match was played on a lovely crisp day with very little wind. Cill Dara started the match well and largely dominated the opening exchanges.  The first ten minutes was played nearly exclusively in Longford’s half and it was Cill Dara who had the first shot at goal.  The kick was in front of the posts but on the Longford ten metre line. Although it had the distance it veered to the right and came off the upright for Longford to clear their lines.

Longford then came right back into the game and had the best of the next fifteen minutes.  Longford started building the phases and gaining field position. Cill Dara gave away two penalties in quick succession, which saw Longford kick for the corner.

Longford knocked on at the lineout and Cill Dara cleared their lines into touch.  However, Joe McGowan took the resulting lineout quickly to Sean Flynn who made great ground.  It was carried on by Paul Gallogly and then put through the hands with Philly Dardis going over for an unconverted try wide on the left on fifteen minutes.

Longford were gaining a good deal of control at this stage and applied most of the pressure for the next ten minutes, which was converted into points on twenty-five minutes through the boot of Ryan McHugh to give Longford a 8-0 lead with 15 minutes to go in the first half.  Unfortunately, it was a Longford mistake that let Cill Dara back into the contest.

On the 31 minutes mark, Cill Dara turned over a Longford ruck on the home side’s ten metre line and worked their way up to the Longford ‘22.  The Cill Dara No.10, Logan Nicholson put an enterprising chip over the top regathered his kick and went over for a try beside the posts. The Cill Dara 10 then missed the conversion to leave Longford three points to the good.   However, Cill Dara came at Longford again and tacked on a penalty on 42 minutes to draw the scores 8-8. They nearly took the lead in injury time but failed to convert a final penalty attempt which landed short.

Longford knew that to see this contest out that they would have to raise the pace and be more clinical when chances presented themselves.

They obviously had the words of Coach Glenn Baskett ringing in their ears as they came hard out of the traps and immediately put Cill Dara under pressure.

Longford forced a turnover and then a Cill Dara knock on after a kick through.  From the resultant scrum Longford worked the phases making space out wide for Joe McGowan to go over under the posts for a well worked try to give Longford a seven point advantage.

Things went from bad to worse for Cill Dara when their inside centre took a trip to the sin bin for a no arms clear out.  Longford went for the jugular by kicking to the corner when a kick at goal might have been the more prudent option in a cup scenario.  The lineout went over the top and Cill Dara cleared their lines.

Longford knocked on the clearance, which gave Cill Dara a platform from which they exerted considerable pressure for the next ten minutes even though they were down to fourteen players.  Try as Cill Dara might they could not breach Longford’s line even when kicking into the corner. They missed a further attempt on goal on 18 minutes and after this period of pressure it was Longford who closed out the match with a try by Conor Seery.

Flanker Kieran O’Gorman made a great line break from the back of a ruck on the half way line.  He offloaded to the on rushing Liam Brady who was stopped just short of the line. Scrum half Neal Farrell fed the ball out to Conor Seery who crashed over for a converted try to leave Longford in a commanding position with five minutes to go.

Cill Dara kept on coming at Longford until the end but ultimately the home side held on for a fifteen point victory and a place in the second round of the 2019 of the Provincial Towns Cup on Sunday February 10th away to Boyne RFC (Drogheda).

“It was a tough game  against a physical Cill Dara side that came to play. We knew they were doing well in their league, you only have to look at the way they are in the hunt to win 2A, and that they would bring that form to this game. That said if we have real thoughts of progressing in the competition we would be expecting to win these games at home.

“There are a few sore bodies after that game. We thought we held our shape pretty well, maybe missed a few opportunities with our last pass decision making. We thought we defended pretty well throughout, and showed that in the way we held at the end. So yeah, job done. We have been drawn against 1A side Boyne away in the next round so that’s a big challenge for the group.

“We now look to prep for a massive game away to Tullow in the league on Sunday. The challenge of Tullow away is as tough as it gets in our league, but one which we will step up to. This game was always marked by us as a key one since before Christmas, and even last week in the build-up to Cill Dara we still had one eye on Tullow.”

On Sunday next it is back to league action with an away trip to Black Gates to play Tullow.
It is a battle of third versus fourth in the table and with first and second; Suttonians and Monkstown, facing off on the same day it offers Longford/Tullow a chance to make up ground on the leading two.
Tullow is always a tough place to visit but Longford have a lot of experience down there and know that it is a cup final in regards to challenging for second place in the league and a potential promotion play-off with only three matches remaining.
Longford earned a 35-23 bonus point versus Tullow in CPL Park in November and will have to be at their best to come away from County Carlow with a win.
The Early XV will be looking to lay down a marker versus the same opposition as they build up for the first round of the Provincial Towns Seconds Cup clash away to Athy on Sunday week.